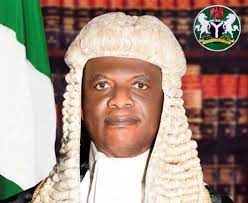 The Minority Leader of House of Representatives, Rt. Hon. Ndudi Elumelu has said that the late Justice of the Supreme Court of Nigeria, Justice Samuel Chukwudumebi Oseji dwelt in the lofty realm of truth, justice and impartiality found only among the immortals.

Elumelu in his tribute at the Night of Tributes in honour of the late jurist on Wednesday held at the Court of Appeal, Asaba, Delta State, acknowledged that life of the late jurist was an embodiment of faith, courage and that of forthrightness that made the jury the last hope of the oppressed in an unjust world.

“Justice Oseji made immense contributions to the development of jurisprudence in Nigeria. His ability to sieve out the truth and serve justice on knotty cases was exceptionally legendary. He remained an exceptionally brilliant and straightforward judge, who spared nothing in the affirmation of justice and truth,” Rt. Hon. Elumelu stated.

Elumelu who represents Aniocha/Oshimili Federal Constituency in the House of Representatives, lamented the passing of the Justice of the Supreme Court and said that his Aniocha North Local Government area, his  federal Constituency, his State Delta and the Nigeria Nation as a whole, and of course humanity, particularly, the institution of the Judiciary, has lost one of the nation’s finest, saying that Justice Oseji, with all his greatness and wisdom, remained humble, and succeeded with an uncommon dignity and calmness.

“His death has therefore left a yawning gap in our judiciary system and the nation will miss his legal and intellectual contributions to the administration of justice in our courts.

Today, as I render this homage, my heart bleeds. Nevertheless, I am consoled that Justice Oseji lived an uncompromised and fulfilled life. He lived as a lesson in humility, courage in the pursuit of truth and justice.

“Despite the pressure of his calling as a judge, Justice Oseji remained a peaceful and God fearing soul; a devout Christian, who loved God and did all to uphold His ways of justice, mercy and kindness to mankind.

“Throughout his days as Legal officer in the defunct Bendel state, Senior Magistrate and later Chief Magistrate in the Delta state judiciary, Chief Registrar of Delta state, Judge of the High Court of Delta State, Justice of the Court of Appeal and later a Justice of the Supreme Court, Justice Oseji served with the highest sense of responsibility which he also displayed in the various electoral tribunals he was appointed into.

“We love Justice Oseji, but his maker loves him the most. We want him to be with us, but his Lord wants him back home at this time. What then shall we say?,” The Federal Lawmaker grieved.

Elumelu, however, said that he was comforted by the fact that Justice Oseji fought the good fight, finished the race set before him by his maker and want further to affirmed that the noble jurist kept the faith and have received the crown of righteousness, which the Lord preserved for His saints.

While conveying his heartfelt condolences to the wife, Dr. Mrs. Mininim Oseji, the Oseji family of Idumuje-Unor for the loss, the Minority Leader condoled with the Governor of Delta State, Senator (Dr.) Ifeanyi Okowa, who he noted had been heartbroken by the death of the eminent son of the State.

“Permit me also to convey my condolences to the Chief Justice of Nigeria (CJN) Ibrahim Tanko Muhammad CFR, for the loss of Justice Oseji, who was one of the outstanding Justices of the Supreme Court,” Elumelu said.