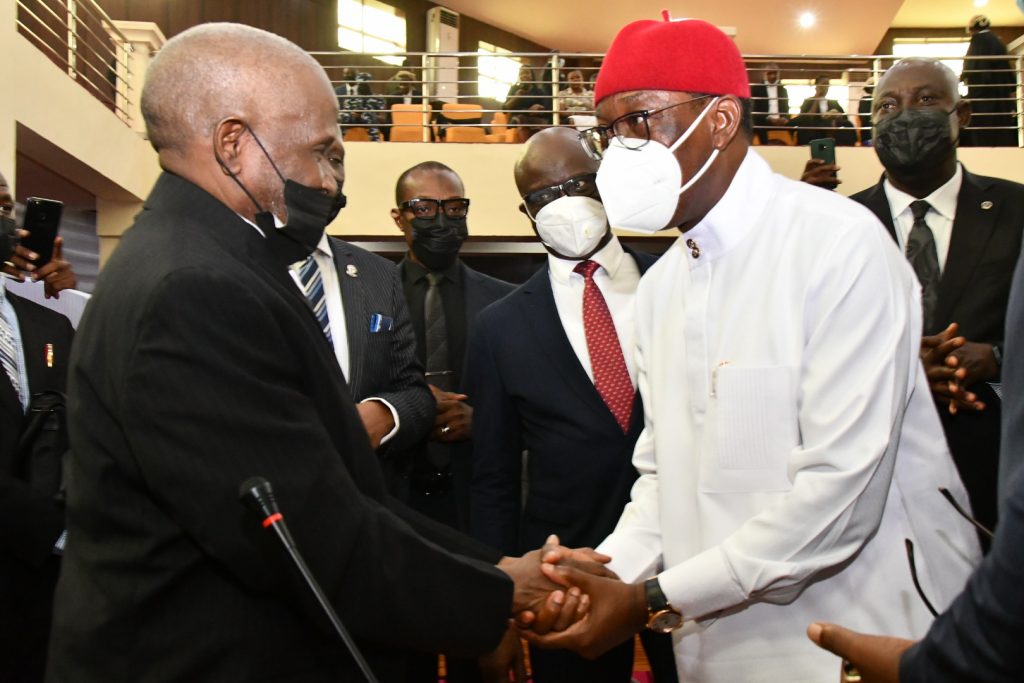 The Chief Justice of Nigeria (CJN), Hon. Justice Tanko Muhammad, on Thursday, said Nigeria has lost a hardworking, courageous and brilliant jurist in the person of Justice Samuel Oseji who, until his death, was a Justice of the Supreme Court.

Muhammad disclosed this during a special valedictory court session held at the ceremonial hall of the Court of Appeal, Asaba Division in honour of Justice Oseji who died at the age of 67 years.

The CJN who led Justices of the Supreme Court and Court of Appeal to the special valedictory court session said the death of Justice Oseji was a big loss not only to the government and people of Delta State but to the Nigerian nation as a whole.

According to him, the late Justice Oseji, in his few months as a Justice of the Supreme Court, made significant contributions to the advancement of the Judiciary in the country.

While commiserating with the wife, children and family members of the deceased jurist, the CJN urged them to take solace in the fact that the sexagenarian judicial officer left a legacy of service, hard work and humility.

“I express gratitude to God Almighty for providing us the opportunity to attend this special valedictory court session.

“I sincerely condole the immediate and extended family members of late Justice Oseji as well as the government and the good people of Delta State over the death of their worthy son.

“The news of the passing away of Justice Oseji was received with a great shock.

“The Nigerian judiciary has lost a hardworking, dedicated, brilliant and courageous jurist in the person of Justice Samuel Oseji,” he added.

In a tribute, the Chief Judge (CJ) of Delta State, Hon. Justice Theresa Diai who presided over the special valedictory court session said late Justice Oseji came into the legal profession with a sense of mission and a clear vision to serve his fatherland and humanity to the best of his ability.

Justice Diai pointed out that from rendering services to the less privileged as a Legal Aid Officer in the Legal Aid Council, Justice Oseji became a Magistrate and later an administrator, in his capacity as the Chief Registrar of the High Court and then a Judge of the High Court.

According to the number one judicial officer in the state, God granted the late jurist the grace to be elevated to the Court of Appeal and thereafter, to the Supreme Court of Nigeria.

The CJ pointed out that some of late Justice Oseji’s invaluable contributions to jurisprudence through erudite judgments and notable judicial pronouncements were documented in a compendium published in his honour by the funeral committee.

“Words cannot describe the extent of our loss or the grief we feel at the loss of this beautiful soul. When the news of his death reached Delta State, it was greeted with disbelief and shock. Delta State stood still.

“He was our shinning star and a worthy ambassador of our dear state wherever he went. He made us proud. Some of us knew he was sick but not the gravity of his ailment.

“None of us knew it would take his life. The tears have refused to stop. It is always unbearable when so much hope turns into sorrow,” Hon. Justice Diai added.

Others were the Minority Leader in the House of Representatives, Hon. Ndudi Elumelu; top government functionaries including the Attorney General and Commissioner for Justice in the state, Isaiah Bozimo; Senior Advocates of Nigeria, the president and members of Nigeria Bar Association of various branches in the state as well as members of the deceased family.