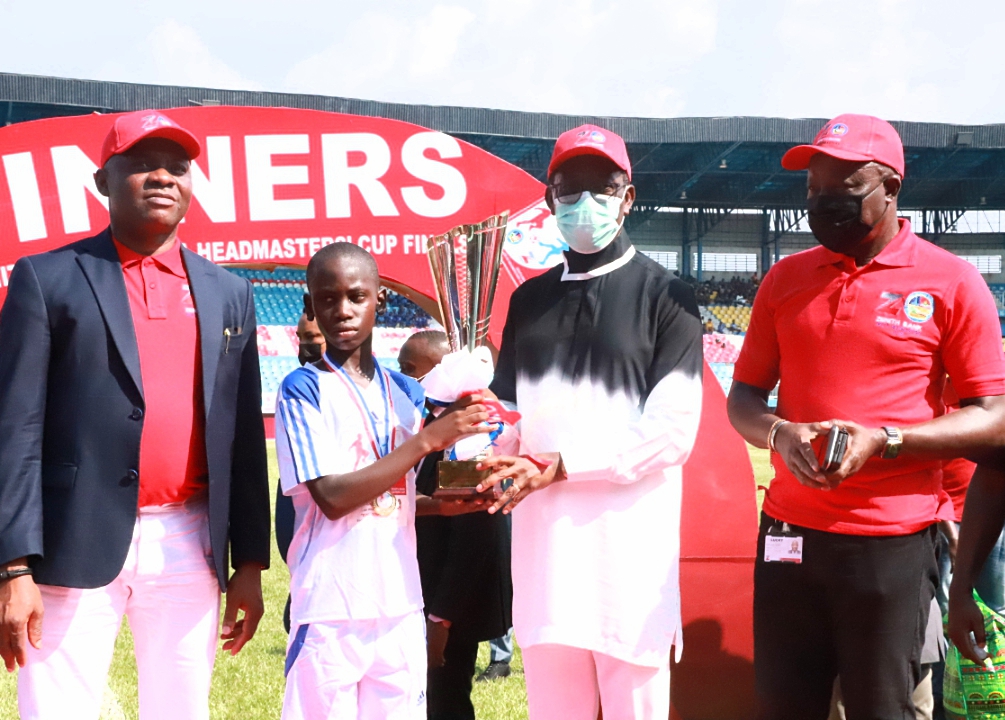 Valleystream British School, Sapele, has emerged winners of the 2021 edition of the Zenith Bank Delta Headmasters’ Football Cup for primary schools in the state.

A total of 497 primary schools participated in the tournament, before the final match played at the Stephen Keshi Stadium, Asaba today Thursday, November 18, 2021.

Governor Ifeanyi Okowa who took the kick-off for the final match, said school sports was a veritable tool to develop children mentally and physically.

He lauded Zenith Bank Plc for sponsoring this year’s edition along with the Principal’s Cup the bank had always sponsored from inception.

According to the governor, school sports is very important for our children as it helps to develop them mentally and physically.

“Beyond developing them physically, it helps to pick out talents in their young age and I must appreciate the coaches and headmasters, teachers and the organisers for making this year’s  edition colourful.

“We will keep faith with our initial intentions to catch them young because we have seen beautiful display of football in this tournament.

“As a state, we have done very well in various sporting competitions in the country and we will continue to pay critical attention to sports development in the years ahead,” he said.

The governor stressed that henceforth all schools in the state must endeavour to register to participate in subsequent editions to give their pupils opportunity to showcase their talents.

“Henceforth, it is important that all schools should register for the competition from next edition and we may sanction schools who failed to register for participation.

“I must thank Zenith Bank Plc for sponsoring the 3rd edition of the tournament alongside their sponsorship of the Principals’ Cup.

“The star prize for the winners which is a school bus is here and I must congratulate Valleystream British School, Sapele for emerging winners of this year’s edition.

“Let me use this opportunity to thank Deltans for their support for my administration as we value their friendship and commitment even as we work towards offering our best for the good of the people within available resources,” he stated.

Zenith Bank Managing Director, Mr Ebenezer Onyeagwu, said the bank was glad to have sponsored the competition in line with its corporate social responsibility.

Represented by the Delta Zonal Head Delta, Mr Lucky Ighade, the Zenith Bank boss said the bank would continue to sponsor both competitions in the foreseeable future.

Commissioner for Primary Education, Chika Ossai in his welcome remarks, said the competition which was at its 3rd edition was meant to scout for talented children in football and nurture them as they develop both academically and physically in a world where the vices of cultism and drug abuse have taken deep root amongst younger generations.

“All over the world, grassroot sports have proven to be the most effective tool in fostering discipline, focus and team spirit amongst children and youth of all ages,” he stated.