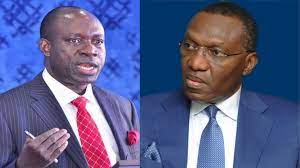 Before Anambra 2021, previous governorship elections in the state since 1999 had only two formidable political parties battling for control of power, but the November 6 and 9, 2021, poll showcased four parties scheming for the prime position.

Each of the parties had a burden to discharge, with the poll serving as a referendum on the ruling APGA at the state level and the APC at the national stage, and a test case for the PDP and YPP.

As the APGA and APC were judged on the achievements of the eight-year government of outgoing Governor Willie Obiano, and the six-year administration of President Mohammadu Buhari; the PDP and YPP were tested on their viability to take over power at the federal and local levels, respectively.

Despite the fears that insecurity could mar the process, as witnessed pre-Election Day, the franchise, measured against past exercises, came out reasonably free, fair and credible. And the credit goes to all the stakeholders in the electoral management.

The margin of lead of 58,422 votes, and the highest scores in 19 of the 21 local governments satisfied the constitutional provisions for INEC to declare Prof. Soludo as winner and Governor-elect, and subsequently issued him, along with his Deputy Governor-elect, Dr Onyeka Ibezim, a Certificate of Return for his victory.

But as Prof. Soludo commences observing the countdown to the March 2022 takeover of power from Governor Obiano for his first term in office till 2026, he’s cautioned to apply the breaks.

Not so fast, say the APC and Senator Uba, who contend that the election, widely adjudged as passing the credibility test, was fraudulently conducted to favour the APGA and Prof. Soludo. They aver to have facts to puncture what INEC has declared, which said facts they’re willing to place before the Election Petitions Tribunal, and possibly the Appeal Court and Supreme Court.

But the APC and Senator Uba are facing fierce criticisms and opposition within and outside the party, with pressure mounting on them to shelve the court process and accept defeat. All “interventionists” in the Anambra election follow the same or similar train of argument, urging that the APC and Senator Uba’s attainment of the third position at the poll was an unprecedented feat worth celebrating by the party members.

However, the clamour for the APC and Senator Uba to drop their legal redress is verging on blackmail, with some claiming that the Anambra people “will hate Senator Uba more” for defying President Muhammadu Buhari’s congratulation of Prof. Soludo.

The don’t-challenge-the-election-outcome crowd seems to suggest that were the APC and Senator Uba to triumph in the courts, President Buhari would refuse to accept Uba as Governor-elect!

What an illogical spin! Because the election is perceived as free, fair and credible, any aggrieved political party or candidate, no matter the facts at their disposal, shouldn’t contest the poll in the courts! While politicians often claim that elections they lose are rigged against them, the public shouldn’t view any challenge to even remotely credible polls as an affront to the people’s mandate.

This is the scenario that’s dogged the APC and Senator Uba, with even high-profile members of the party not prepared to give them the benefit of the doubt in their claim of fraud at the poll. A major counter to APC’s averment is that Senator Uba fell behind the purported 230,201 votes cast by party members at the APC primaries, to assume the candidate in the November balloting.

The arithmetic is simple. If the 348,490 APC members at the primaries, the 230,201 members that voted to crown Senator Uba as the APC candidate, or half of either figures had showed up for the APC on Election Day, Senator Uba would’ve received more votes than the 112,229 votes recorded by Prof. Soludo, and be declared as the Governor-elect of Anambra.

Obviously, the above calculations, and permutations informed the clamour for the APC and Senator Uba to toe the path of honour and acknowledge their resounding defeat at the election.

That said, it’s the right of the APC and Senator Uba to seek redress in the courts if they felt they’re robbed of victory at the poll they didn’t register any win in the 21 local governments of Anambra.

At a meeting of APC leaders in Awka, the capital city of Anambra, the state party chairman, Chief Basil Ejidike, and Senator Uba were emphathic that the election was fraudulently conducted, and that they’d take legal action to remedy the alleged malfeasance. Ejidike said: “We are heading to court. APGA and INEC are aware that they compromised during the election and we have evidences to challenge INEC’s declaration in the court of law.

“Ndi Anambra and the world at large would bear testimony to the fact that, on the eve of the election, the outgoing Governor Obiano administration had, through its Commissioner for Information and Public Enlightenment, Mr. C. Don Adinuba, told everyone that the APC had written results of 10 Local Government Areas.

“Unknown to us, however, that false alarm was aimed at deflecting attention from the manipulation of the BVAS machine by APGA and a top official of INEC – a fact which a national newspaper had, weeks earlier, drawn attention to.”

In affirmation of that stance, Senator Uba said: “We will be heading to court with the discoveries we have, which show that the declaration of Soludo as the Governor-elect is faulty.

“As governor, I was removed, after 17 days of being sworn-in, by (a ruling of) the Supreme Court of Nigeria and I did not die. So, the current development won’t hurt me… This, I can assure you.”

So, let the APC and Senator Uba present proofs of the alleged manipulation of the November 6 and 9 combined elections to the Election Petitions Tribunal, for the legal fireworks to begin.

As Nigeria has, through the machination of politicians, ceded the final say on elections to the courts, we should salute the APC and Senator Uba for ventilating their grievances in the courts, and refrain from prejudging the outcome of the proposed writ.