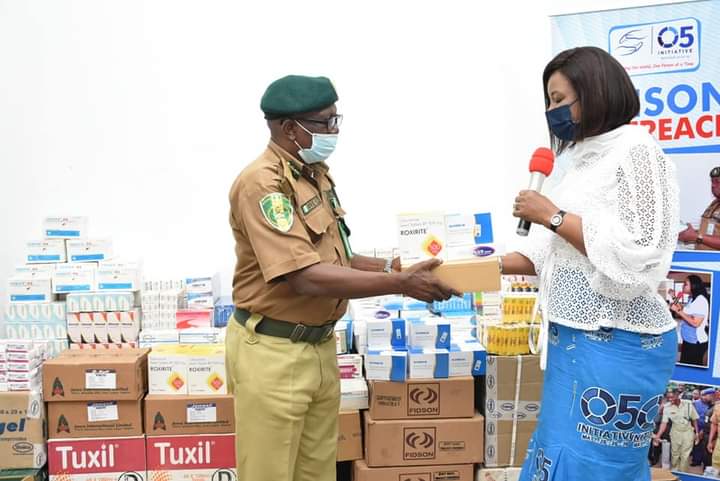 Chief_editor November 30, 2021November 30, 2021
To sustain their access to improved and constant healthcare, the five correctional centres across Delta State, yesterday received tons of free medical items from the Wife of the State Governor, Dame Edith Okowa.
Since inception of this administration,  the O5 Initiative has consistently reached out to inmates in different dimensions. 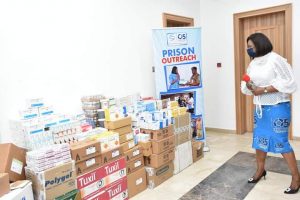 Addressing the gathering of representatives of prison officials and top government functionaries in her office at Government House, Asaba, yesterday, she said,
“Before 2020, we had made it a point of duty to reach out to the prisons in the state with medications at least twice a year in addition to other items.
But with the advent of COVID-19 last year, we had to collapse the medical outreach to once a year and so we have gathered enough drugs to last them for a while.
“But as much as this is a product of the O5 Initiative vision, we want this to continue even after this administration because the inmates will still be in need of medical care.
“Personally, I love continuity of good policies and legacies. Governor Ifeanyi Okowa has done what he can do and in 2023, we would be gone.
“But we do not want this action to die and the only way to sustain it is to get the State Ministry of Health involved”.
She thus appealed to the Permanent Secretary, Ministry of Health, Dr. Ejiro Ogheneaga who was present at the meeting, to reach out to his colleagues to ensure that the gesture is sustained and possibly improved.
“It is the least we can do, to make life easier for others. It is not about me, it is about Jesus and His love for us all”,she added.
She urged other well meaning individuals to make it a point of duty to reach out to those around them in love, especially in this season of celebrations and feasting.
In response, the Controller of  Corrections, Delta State Command, Dr. Ovie Esezobor in his remarks after receiving the medical items, extended the good will of the Controller General, whom he said had gotten winds of the positive developments in the state.
” We are really grateful to Her Excellency for this kind gesture that she has sustained.
“Currently, all our clinics across the five correctional centres in the state are filled with drugs and that has greatly helped to avert the number of casualties.
“The drugs are useful for treating both the inmates and members of staff and currently, we are not lacking both drugs and medical personnel”.
The beneficiaries of the medical outreach include the Correctional Centres in Agbor, Sapele, Kwale, Ogwashi-Uku and Warri.
The Wife of the Governor urged the doctor  in charge of the centres across the state, Dr. Elliott Ogunbor, to ensure that the drugs and medications are distributed according to the number of inmates in each centre.