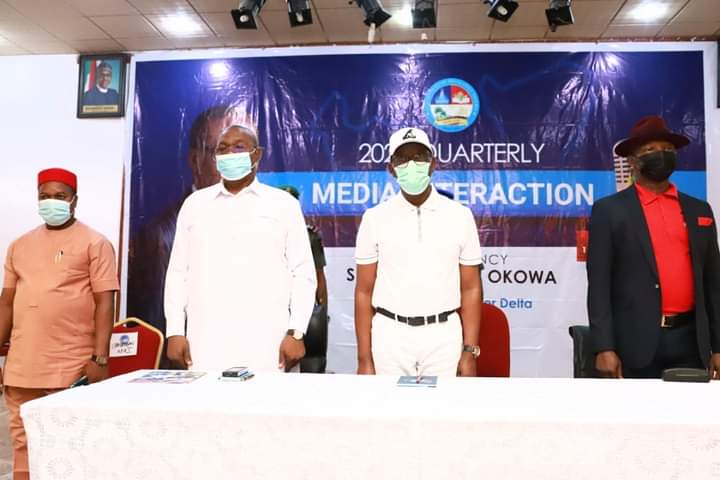 Governor Ifeanyi Okowa of Delta State says residents of Warri and its environs will feel the intervention of government in flood control as soon as the different segments of the drainage project was connected.

Governor Okowa who was responding to questions at his quarterly media interaction with Delta journalists in Asaba, said the storm drainage project in Warri and environs was dear to his administration.

He debunked the rumour that part of the project has been abandoned stressing that the Warri,Uvwie and its Environs Development Authority (WUEDA) was being funded to deliver on its mandate of turning the oil-rich Warri into a modern city.

He added that some roads and traffic prone areas in Warri will receive attention soon and gave assurance that every part of the State will continue to receive equal attention.

On the non functionality of the Warri Stadium, Governor Okowa said the area was being drained to ensure that it is not flooded whenever it rained, stressing that it was not abandoned but will be in good shape when the drainage is completed.

On the proposed removal of petroleum subsidy by the Federal Government, the Governor said it was going to affect the masses negatively pointing out that the economy was down.

He equally expressed worry at the level of borrowing by the Federal Government emphasizing that such move was posing a great burden to the economy.

He disclosed that it was hard to pay November salaries of workers due to dwindling financial receipts from the federation account despite the rise in the price of crude oil in the international market.

Following the failure of the Federal Government to reconstitute the board of the Niger Delta Development Commission NDDC, Governor Okowa said it was unfortunate emphasizing that the office was operating illegally in the last two years.

He advised the Federal Government to do the needful as some states were denied representation in the commission and sued for peace in all parts of the state to pave way for meaningful development.