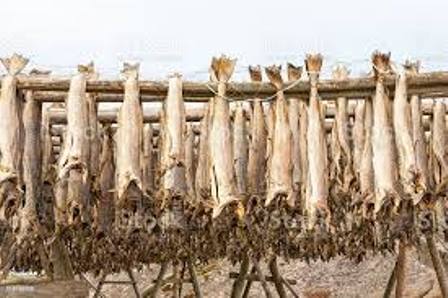 Analysis: Why Stockfish should remain important in Nigerian cuisine

Over the years, Norwegian stockfish has become an important component/ingredient in Nigerian meals.

This seafood has high nutritional benefits in addition to the widely appreciated taste.

Intriguingly, stockfish has a history beyond the product itself.

Producing the perfect stockfish is an art. It involves first-class craftsmanship and expertise, as well as the very forces of nature itself.

Nigeria and Norway have long traditions in working together in several ways and this include the importation of stockfish which started as far back as the 1890s.

Over the years, as part of the knowledge expansion and awareness of the product in the country, the Norwegian Seafood Council has carried out various seminars, workshops, seafood festivals and a distinctive chef training workshop.

During a recent event at the Muson Center, Lagos, the council showcased the fusion of parts of the stockfish opera with the performance of Nigerian Cultural Dancers and Artists. This was followed by a seafood dinner.

Speaking at the 2021 sensitization and awareness seminar on food safety organised by the Norwegian Seafood Council in Lagos, the Norwegian Minister of Fisheries and Ocean Policy, Mr Bojmar Skjaran, called on the Nigerian Government to remove stockfish from the list of the 43 items that were restricted from accessing foreign exchange.

Skjaran noted that the inclusion of stockfish on the list had made it more difficult for both Nigerian importers and Norwegian exporters to trade in the commodity.

According to him, stockfish is an important part of the businesses and culture of Norwegians, adding that the trade in the commodity dates back more than 100 years.

“There is a growing demand for stockfish in Nigeria. However, we do have some challenges.

“The main one is the inclusion of stockfish on the list of items that are restricted from accessing foreign exchange which has made it more expensive for both importers and consumers of stockfish.

“In recent months, the situation has grown from bad to worse and the fish industry has reconfirmed the fact that stockfish prices may increase. There are many reasons why stockfish should be removed from the list of items with foreign exchange restrictions.”

He noted that Norwegian stockfish is a unique product that can only be produced in a special climate that is only present in Northern Norway.

“Secondly the Norwegian government is not in competition with locally produced fish in Nigeria.

“Norwegian stockfish is a good source of protein; it contains 80 per cent of the protein requirement of the
consumers; it is low in fat.

“The Norwegian Government will continue to work with the Nigerian government with a view to removing it from the list of items restricted from accessing foreign exchange,” Skjaran said.

Also, the Norwegian High Commissioner to Nigeria, Mr Lein Knut, appealed to the Nigerian government to remove stockfish from the list, highlighting the diverse benefits of the product.

“We think stockfish should get access to FOREX, we need better logistics in the ports of Nigeria, lower import taxes and less bureaucracy.

“Stockfish is low in fat and a good source of protein for its consumers.

“It’s a unique product that can only be produced in a special climate,” Knut said.

Also, at the seminar held in Lagos in 2020, the Chairman, First Premier Stock Fish Importers Association of Nigeria, Deacon Gregory Ilobinso, said that getting FOREX for their businesses had become a big challenge.

“If importers want to bring in stock fish, then we have to have an approved ‘Form M’ from the Central Bank of Nigeria (CBN) with evidence of U.S. dollars to finance the import.

“It takes from six months to one year to get a Form M approved, and because of this, we cannot stock up the product. That is why we are appealing to the Federal Government to allow us access FOREX to enable us import Stock fish.”

“We understand the Federal Government’s stance that the oil market is volatile, FOREX is not in steady supply but the cost of accessing dollars for Stock fish is not so much compared to other commodities,’’ he said.

Ilobinso made a case for the relevance of stock fish in the Nigerian diet and the need for the government to ensure ease of accessing FOREX for the trade, saying there was no substitute, alternative or competition for stock fish in Nigerian cuisines.

“Stock fish has its own place and adds its own flavour to Nigerian meals. Eating and using Stock fish for meals has become a tradition and a delicacy for us.

“It has a long shelf life that cannot be compared to any protein source; it can be kept in the kitchens for an average of two years.

“During the Nigerian civil war, due to the outbreak of Kwashiorkor, the World Council of Churches imported Stock fish to help solve the protein deficiency,’’ the chairman said.

According to him, when dealers cannot import stock fish, a lot of people in its value-chain will lose their sources of livelihoods.

“The wholesalers, retailers, truck drivers, mechanics and loaders will lose their jobs if we cannot import stock fish. If we are allowed to access FOREX, it will be an added benefit to the government in terms of increased revenue.

“But, if these goods find alternative ways of getting into the country, the government will likely lose revenue from its importation,” he said.

Similarly, the Minister of Agriculture and Rural Development (FMARD), Alhaji Sabi Nanono, who was represented by the Director of Fisheries, Dr Ime Umoh, called for more collaboration between Norwegian and Nigerian governments and for ease in Stock fish trade in the country.

“The total fish production in Nigeria is about 1.123 million metric tons, including imports, and it still does not satisfy the total fish demand.

“With this, it can be said that the total volume of foreign exchange consumed by this product is very minimal.

“In spite of the fact that the government needs to reduce the nation’s import bills, we need to take cognisance of the importance of cheap and affordable protein and other nutrients for the Nigerian populace.

“While initiating policies and regulations, there is need to be aware of the reciprocity of trade among nations and the fact that we can also involve our trading partners like Norway to assist us with our integration process into commercial aquaculture,” the minister said.

Also, the Minister of Industry, Trade and Investment, Mr Adeniyi Adebayo, represented by the Deputy Director, Mr Ishayaku Zakaria, noted that the present administration would continue to initiate policies and reforms to remove bottlenecks and trade barriers.

“We appreciate the special nature of the relationship between Nigeria and Norway that predates our independence. Nigeria is the second largest importer of seafood from Norway after China.

“Nigeria’s imports from Norway stood at $ 148.39 million as at 2019. We cherish the relationship and will continue to foster the growth of investment, trade and cooperation between both countries.

“The present administration has initiated several reforms and policies geared toward removing some bottlenecks in trade, restructuring the economy and diversifying the sources of revenues,’’ Adebayo added.

Stakeholders at the end of the seminar urged the Federal Government to review the landing cost of stock fish importation in the country, appealing that government should revisit and reverse the policy.

They, however, appealed that the duty on stock fish and stock fish Head should be reduced from 20 to 10 per cent to reduce smuggling.

“The government is advised to make policies that will create enabling environment for Non-oil Export such as Fisheries, Agriculture and Agro businesses covering Livestock and other key value chains with respect to the African Continental Free Trade Area (AfCFTA).”

The stakeholders appealed to the Federal Government to review the inclusion of Stock fish and Stock fish Head in the list of items not valid for Foreign Exchange.

They also pushed for the reduction of  landing cost of Stock fish and stock fish head into the Nigerian market.

In all, the plea  becomes important especially  as stock fish (COD) cannot be farmed in Nigeria and in Nigerian waters.

According to them, stock fish and stock fish head importation has not negatively affected the increase in local production of fish in Nigeria because the volume imported is relatively low.

They maintained that foreign exchange requirement for importation of stock fish and stock fish head was no where compared to the other heavy 42 items on the exclusion list.

They also alluded to the fact that stock fish business is a major avenue for Income and Wealth Creation — direct and indirect, especially for the middlemen, retailers, market women, transporters, loaders and off loaders, so that the occurrences of crimes can be stemmed. (NANFeatures)