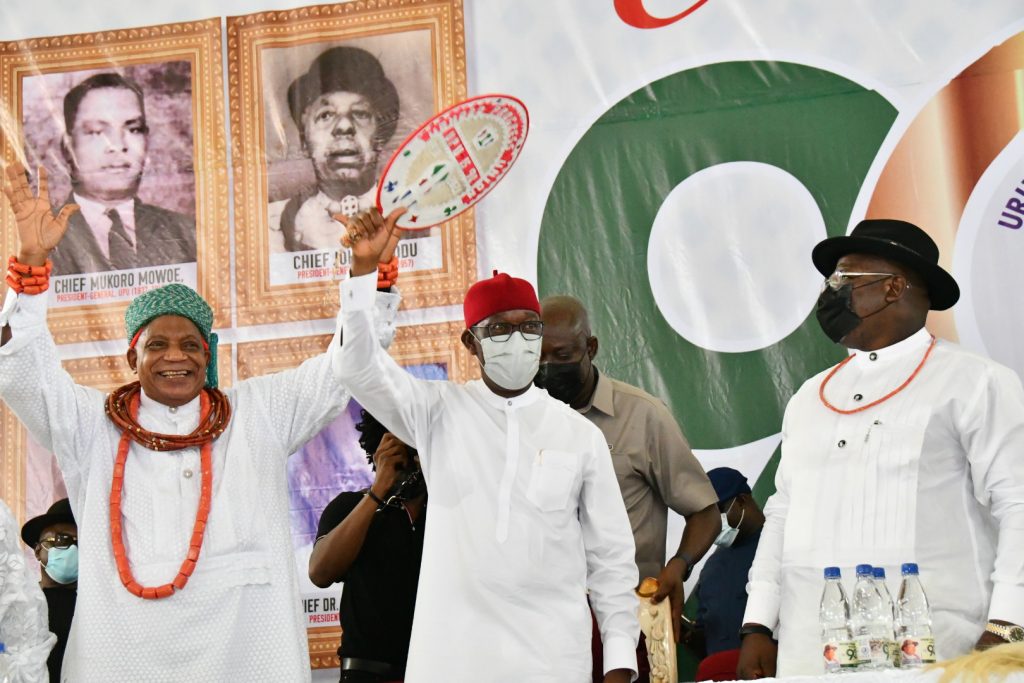 The Urhobo will build alliances with other ethnic nationalities in the South-South and beyond to proffer a new destiny for Nigeria as the nation tottered to a new beginning, President-General of Urhobo Progressive Union (UPU), Chief Moses Taiga has said.

Taiga spoke at the 90th Anniversary of UPU held at the Urhobo Cultural Centre, Uvwiamuge-Agbarho, Ughelli North Local Government Area of the state.

The leader of the socio-cultural organization said: “While we do not support secessionist agitations, we align with the call for the restructuring of Nigeria in line with the tenets of federalism.

“We support the call for the relocation of the headquarters of all oil companies to the Niger Delta and the call for election results to be transmitted electronically.

“Urhobos are in support of states’ collection of Value Added Tax (VAT), the enactment of Anti-Open Grazing Laws, the establishment of State Police and other such progressive factors that will make Nigeria great again,” he stated.

Taiga said Taiga that UPU was celebrating 90 years, a decade short of a century, adding that the union was Nigeria’s oldest surviving socio-cultural organization, pointing out that UPU saw education as the light that would illuminate Urhoboland and liberate its people.

He also announced that UPU was working on bequeathing an economic legacy to future generations with the proposed establishment of Okugbe Microfinance Bank which was awaiting operational license from the Central Bank of Nigeria (CBN).

Meanwhile, Delta State Governor, Dr Ifeanyi Okowa, who graced the Friday event, commended the people of Urhobo for their immense support and contributions to the development of the state and country, with a call on them people to prune down the number of aspirants in the governorship race, advising that it was in their best interest to reduce the numbers.

He thanked the leadership of the union for using its relationship with the people to ensure peace and organise them for purposeful development and being of great assistance to any government in power in the state.

“I know the role the UPU has been playing in helping to build peace in Urhoboland and in trying also to extend hand of friendship to other ethnic groups across the state.

“By the time our people in Delta State relate as one, then you would have helped government to solve its problems because once you have been able to establish peace it becomes much  easier to develop the state,” he said.

“They have always been a strong support behind all the governments of this state but particularly in my time, they have done a lot to help in stabilising government and to ensure that we have been able to live in unity as a people.

“Let me also thank the kings for their support to the UPU which had contributed in making it the oldest ethnic nationality group in Nigeria,” he stated.

He lauded UPU for the honour done to some illustrious sons and daughters, adding that it would help in encouraging others to put in their best in the growth and development of the nation.

“I don’t believe that we must fight everything through; sometimes a kind word or a conversation can help you to get to where you want to be,” he said.

He admonished governorship aspirants to exercise restraints in their consultations and campaigns.

“I want to appeal to our sons and daughters who seek to be governor. It is usually best when you approach it on the basis of friendship.

“It is usually best that we are choosy on the kind of words that we use in the public so that we don’t start any round of fights.

“No matter how provoked, any person aspiring to the position of leadership must learn to control his anger and speak peacefully to people because in so doing, he attracts friends to himself,” he said.

He called on Urhobo people to prune down the number of aspirants in the governorship race, advising that it was in their best interest to reduce the numbers.

“When there are too many sons and daughters in a race, it creates its own challenge and I believe that the elders have understood this.

“There is a need to trim down and I believe that the time is now.

“I thank you for the support you have given me as a people through the course of governance in the last six and half years.

“It is my prayer that Delta will remain peaceful and united and whoever is coming will recognise the fact that we are better off as united people and once this is done we will continue to be stakeholders in our own state,” Okowa added.

The ceremony featured presentation of awards to deserving sons and daughters who distinguished themselves in various disciplines and made Urhobo proud in the past 90 years.