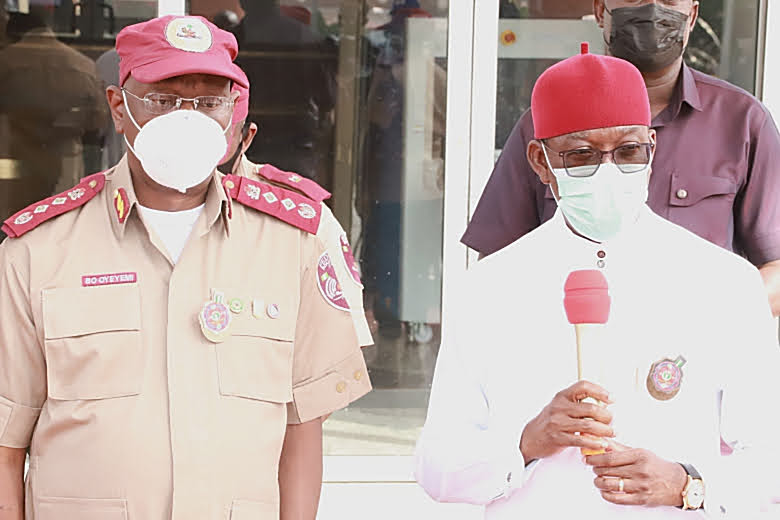 Delta Governor, Sen. (Dr) Ifeanyi Okowa, on Monday said his administration would sustain its partnership with Federal Road Safety Corps (FRSC) to ensure safety on roads in the state, especially during the yuletide

Okowa stated this at a joint media briefing he held at Government House, Asaba, with the Corps Marshal of FRSC, Mr Boboye Oyeyemi, on traffic management in the state during the Christmas season.

He assured that the state government would continue to do all that was necessary to support the Corps in ensuring free flow of traffic across the state.

The governor thanked Oyeyemi for the interest he had taken in traffic management in Delta during every yuletide, saying “there is no doubt that a lot of work is being done to ensure free flow of traffic through the River Niger bridge as a lot of travels are being done during the festive season.

“I have also got a call from my brother governor in Anambra State; they are also doing the same thing.”

He disclosed that FRSC had already placed a tow truck at appropriate places, and reiterated that his administration would continue to cooperate with the corps.

“I am sure that the SSG will keep his eyes on the ball and continue to monitor the progress recorded. I thank my brother governor in Anambra for the cooperation from their own end.

“It is not the best thing for someone to travel from a very long journey only to be stuck in traffic at the head bridge. We will continue to do all that is necessary to keep the free flow of traffic,” he said.

Earlier, the Corps Marshal had expressed appreciation to Governor Okowa for his administration’s robust collaboration with the FRSC in its operations in the state in the last six years.

He assured road users of free flow of traffic before, during and after the festive period, saying that nobody would sleep on the River Niger Bridge as they travel to celebrate during the season.

According to Boboye, the resolutions of the stakeholders meeting coordinated by the Delta State SSG, Chief Patrick Ukah, has been fully implemented, part of which is that a tow truck should be by the foot of the bridge and has been done.

The FRSC boss added that the resolution that all the major junctions should be manned by FRSC personnel had also been implemented.

“Your Excellency, on behalf of the Commission, we thank you once again for this collaboration which has been running for the past six years now.

“I want to assure you that with this synergy between the state government and the FRSC, nobody will sleep on the road.

“The plan of the FRSC during this festive season is not to book offenders, but to ensure free flow of traffic; we will make jingles and announcements on the radio and television. I urge road users to drive safely,” he added.