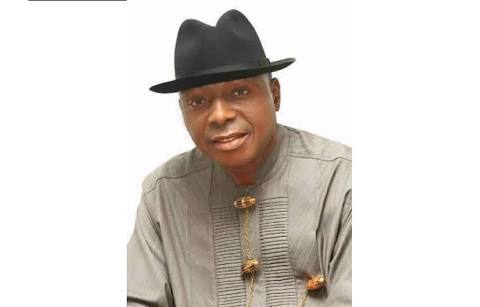 Chief_editor December 24, 2021
By Ambrose Ologide
The senator representing Delta South Senatorial District at the Senate , Senator James Manager, has described the Urhobos of Warri as special people in Delta State.
He stated this in his key note address during the end of the year party of the prestigious Agbarha Warri League at the College of Education, Edjeba Agbarha – Warri in Warri South Local Government Area of the state.
Manager noted that he had always identified with the Warri Urhobos.
” I know your struggles; your struggles are my struggles. I cannot marginalise or abandon you. I will continue to identify with you and support your course ,” he added.
The federal lawmaker further stated that he always gave the Urhobos of Delta South adequate representation at the Senate.
“That was why I refused to join the so called  ‘3 Is ‘  ( Itsekiris, Ijaws and Isokos ) . I insisted that ‘ U’ ( Urhobos ) should be included,” he added.
Senator Manager recalled that he had always worked with the Urhobos harmoniously.
He mentioned the Urhobo born former Delta State governors, Senator Felix  Ibru ( of blessed memory ) and Olorogun James Onanefe Ibori to substantiate his claim.
” I am an Urhobo man. I can speak the Urhobo language fluently . So, it is not true that I want to marginalise the Urhobos of Delta South, ” he added.
Manager had earlier strongly advised Deltans to beware of rumour mongering, saying that “in my profession as a lawyer, rumour does not mean anything except you can prove it. In politics rumour can destroy a society,” he added.
Senator Manager lauded members of the foremost Agbarha Warri Socio / Cultural Association for holding the annual get together, noting that it was worth emulating by other associations or groups in the area .