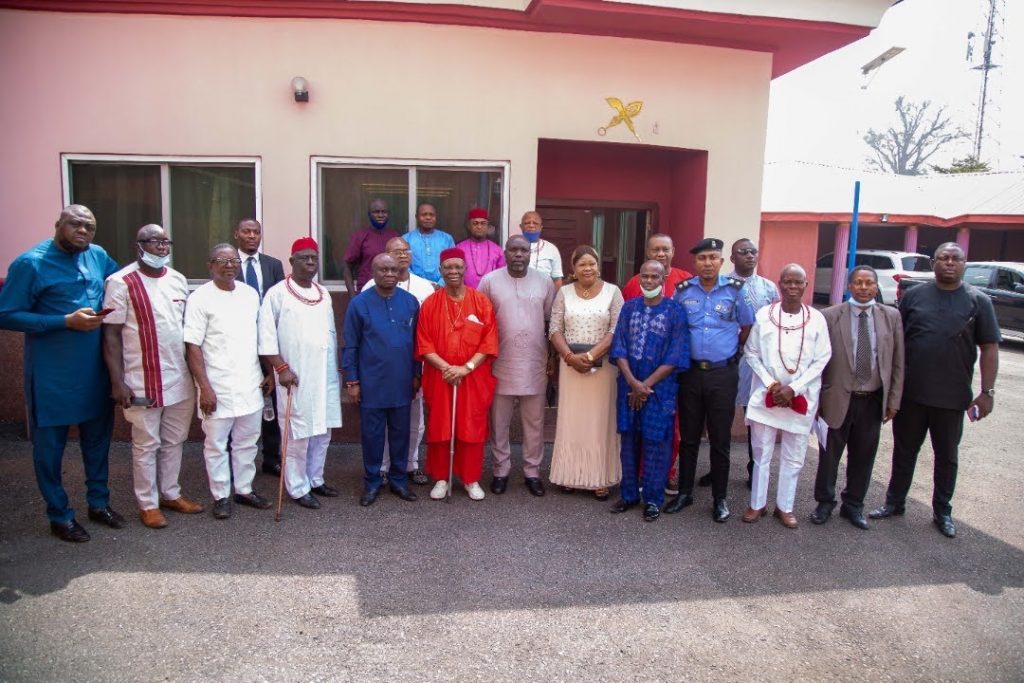 Delta’s Livestock committee assures of benefit of law to all

Egbedi, who is also the State Commissioner for Agriculture and Natural Resources, stated this when he led members of DLMC on a consultation visit to the Owa Monarch in Owa Oyibu and Meyetti Allah Cattle Breeders and Dealers Association in Asaba.

He recalled that the DLMC was inaugurated by His Excellency, Gov. Ifeanyi Okowa on Tuesday, Dec. 14, 2021 with a charge to implement the Delta State Livestock, Breeding, Rearing, and Marketing Regulation Law 2021 in the best interest of the citizens.

He said that the Traditional Rulers and the Meyetti Allah among other stakeholders were critical in the peaceful implementation of the law in the state.

He told the Owa Monarch, HRM, Obi (Dr.) Emmanuel Efeizomor II, who is also the Chairman, Delta State Traditional Rulers Council, that the visit was to solicit his support and to enable the committee interface with traditional rulers during their monthly meeting.

He said that the state government would set up committees and taskforce in each of the 25 Local Government Areas of the state for effective implementation of the law, adding that the law would become effective in three months time.

He said that many years ago, the state had been in peace as farmers and herders go about doing their businesses until the criminal herdsmen emerged.

According to him, the farmers are the backbone of the state economy and they must be protected from harm, molestation, rape and death by the killer herders.

The Commissioner while addressing the Arewa Community; the Meyetti Allah Cattle Breeders and Dealers Association in Asaba, said that the Committee visit was to interface with them to find lasting solutions to the incessant herders and famers crisis in the state.

According to him, Delta is a hospitable state and over the years we have been living peacefully, the farmers and the herders go about their business peacefully.

“But of late, their has been crisis and our people no longer go to their farms for fear of being molested, rapped, or killed by gun wielding herdsmen.

” Today , their is law in place, the law will provide protections for both the cattle dealers and to the farmers, it will benefit all stakeholders if you will support us to implement peacefully.

“I will want you to help us fish out the criminal herders and to take the message to your people across the state that there is a law guiding livestock business in the state and that open grazing is no longer allowed in the state.

He, however, encouraged the cattle dealers to reach out to people and communities to negotiate for land to pen their cattle, adding that they should approach the committee when necessary to give them support and get their business documented.

Responding, HRM, Efeizomor II, while assuring the committee of support, lamented the ordeal been experienced by farmers in the state due to the infiltration of criminal herders into communities in the state.

” I am almost 84 years old and more than 62 years on the throne, I have never seen a situation where every dick and harry are discussing one thing, and it appears those who perpetrate these things are above the law.

“But I want to thank the state government for the step taken, at least bringing a law, for sometime they say there is no law, now there is law.

Alhaji Usman Moukhtar, Senior Special Assistant on Special Duties to the Gov. Okowa, did the interpretation in Hausa for the Arewa community and the Meyetti Allah.

They also reported that prior to the implementation of the law, some hoodlums in their various host communities have at various occasion attacked and killed their cattle.

They call for restraints by the hoodlums while pledging their commitment to remain law abiding and called on the state government to help them secure land for their cattle.

Some members of the DLMC in company of the commissioner are Mr David Tonwe, Dr Charles Diai , Mr Jona Nwigwe, Mr Julius Omonizua and Dr Augustine Ojogbo, the committee secretary.

The highpoint of the occasion was the handing over of a copy of the law by the committee Chairman, Egbedi to the Monarch and the Meyetti Allah Cattle Breeders and Dealers Association respectively for their perusal.