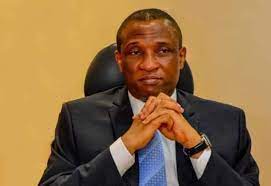 Oga Mi, compliments of the season.

Today, I feel comfortable raising this subject with you because, as the Honourable Commissioner for The Environment, you are doing your second tenure on the driving seat of this critical ministry, following your initial 2011-2015 stint under Governor Babatunde Fashola. This connotes that you would be well versed about the issue I raise here.

More than that, I remember that at the National Concord, where you as the Political Editor were my boss, you exuded the aura of an amiable, consummate and compassionate persona, traits that you conspicuously demonstrated in the way you subsequently ran the Sunday Concord and National Concord as Editor. Undoubtedly, the heights you have attained in Lagos State’s political and administrative corridors have been propelled by these sterling personality traits. Today, the Tunji Bello brand connotes acumen, dexterity and humaneness in public administration.

We are confident that all these will come to play as we guide your attention to the dumpsite along Isheri-LASU Road, at Igando in Alimosho Council, operated under the Lagos State Waste Management Authority (LAWMA) arm of your ministry. Whatever its positives, this particular dumpsite, in its location and encumbrance, has degenerated into a nuisance value. It has become an inglorious monument to impunity and totally defeats any claim Lagos makes to urban renewal and mega city aspiration.

This dump has killed at least two well-known industries. Today the carcases of the Rosellas Amusement Park as well as that of the Lagos State Incubation (Employment/Vocational) Centre lie, deceased in its jaws. These over N2 billion enterprises, now ghosted, are tragic mementos that dumpsites and industries cannot be next-door neighbours. In fact, some interests at the dumpsite currently deploy the two deserted complexes as storehouses for recyclable wastes. Free of charge!

That spot used to be solid dry ground right in the city’s suburb. For years, a government signpost said the sprawling expanse of land belonged to some Lagos State establishment. This notice board effectively prevented the “Omo Oniles” from encroaching. Suddenly, the Chinese encroached. Around 2009, CGGC, the Chinese highway contractor handling the Isheri-LASU-Iyana-Iba road project, swooped on the space with pay-loaders, excavating endless tons of earth for sand-filling portions of the road it was constructing. This created a mammoth ditch. Strangely enough, that burrow pit was dug in that well-developed suburb that hosted a dense population. How could this monstrosity be condoned by a Lagos State that prosecuted people mining sand from lagoons and riverbeds?

Quickly, the ditch created an erosion problem as it became a receptacle for rainwater, endangering neighbouring buildings and property in the environment. Soon this excavated acreage was converted into a refuse dumpsite. That 2009, residents had quickly raised the alarm, calling the attention of Governor Fashola, then Commissioner of the Environment, Dr. Muiz Banire, and the Commissioner of Health, Dr. Jide Idris, to a looming epidemic in the neighbourhood of the General Hospital in Igando. Stench from the dump forever engulfed the hospital’s patients and nearby residents as an unending traffic of refuse vehicles came dumping their foul contents into the artificial hole.  Its operation held the danger of poisoning the water table and the surrounding air. Additionally, it could cause the over 500,000 residents air, water and insect-borne diseases like cholera, tuberculosis, skin cancer, liver cirrhosis, typhoid fever, malaria and others.

Apart from the Rosella Amusement Park and the Lagos State Incubation (Employment/Vocational) Centre that have succumbed to their dangerous neighbour, other endangered establishments include: Alimosho General Hospital at Igando, the LASU-Isheri Expressway, hotels, schools and homes. The hospital is an immediate victim. How could a 6-acre monster dumpsite spring up next door to a government hospital? The stink from the facility oozes around in a 2-kilometre radius, suffocating neighbouring settlements and the hospital that shares a wall with the dumpsite. The stench has become a constant choke to patients, health workers, visitors and patrons alike. How about Its endangering newborn babies and sick people who have naturally depreciated immunity and low resistance to germs? Nowhere in the world are dumpsites and hospitals cited side by side. That they should now be close together in a mega city like Lagos is antithetical and represents a disgrace to city planning and administration. It clearly violates global best practice in town planning.

The dumpsite represents a brazen act of impunity. It is an act of injustice. No private person could have ravaged his land this way, talk more of public property. Nor could it have happened anywhere in Lagos Island, Ikeja or Lagos Mainland without the well-heeled residents raising hell!

All the community’s representations to government have been swept under the carpet.

The Igando dumpsite contradicts everything that the United Nations’ conventions and WHO dictate on the disposal of organic and inorganic waste as well as e-waste, radioactive waste and hazardous waste. According to a research published in the 2019 International Journal of Epidemiology, those living within 5 kilometres of a landfill site risk health issues. This fact has the backing of relevant international organisations like the United Nations Centre for Human Settlements (Habitat), the United Nations Environment Programme (UNEP) and the World Health Organization (WHO).

In “Waste Mismanagement in Developing Countries: A Review of Global Issues,” the authors noted: “These issues are visible worldwide. In Banjul (Gambia) the dump site is located in a densely populated area, visible to the residents. It has a negative visible impact on inhabitants and tourists visiting the country. In particular, the smoke from burning debris is the biggest issue, which covers parts of the residential areas, affecting also the life quality of the population…. The nuisances are worst during the rainy period as the area becomes infested with flies and insects. Run off from the dumpsite with contaminants dissolved inflow into water bodies, while the leachate contaminates the soil and groundwater. Moreover, environmental contamination is due to the high level of faecal and total coli-form that polluted the wells located near the site.”

For residents it has been a nightmare. The pungent odour. The groundwater pollution. The flies – houseflies and tsetse flies. The mosquitoes. Constant sicknesses caused by the unclean atmosphere indicate that this could be a ticking epidemic time-bomb. An entire street and thoroughfare has been sacrificed to this environmental nightmare, with dwellers making a kilometre detour from the bus-stop on the expressway to and fro their homes. On one occasion in 2020, a commercial bus ran into one stationery PSP waste lorry lurking on the highway; and about four people died at the accident spot.

Ironically, Oga Bello, thousands of students of LASU, where your Madam is VC, daily suffer the nightmare which that place has turned into, in terms of the traffic snarl caused by the PSP dumper lorries as well as the stench suffocating the entire atmosphere where some of them reside. A good number of the students commute through the area to get to the university. What should be a 2-minute passage ends up being anything from 25 minutes to hours.

One most disturbing feature is the army of foreign faces who make the dunghill their home. Invariably, they pose a potential danger to residents, who have given a wide berth to the road bordering the dump. Should an ethno-religious crisis break out in that axis, houses and citizens face the danger of being attacked and torched by these faceless hordes masquerading as Northerners, but whose origin is foreign. Those there come from Niger Republic, Mali, Chad and beyond. Their presence is clearly a security breach. For fear of being raped, mugged and robbed, residents have abandoned that entire axis to these unidentified foreign-tongued strangers; and they make their way home via alternative routes.

Honourable Commissioner, I have resorted to this open forum, in the hope of goading you into personal sympathy and convince the government to muster the political will to save the concerned lives and livelihoods from further endangerment from the Igando monster dumpsite.

Do accept the assurances of my prayers and best regards.