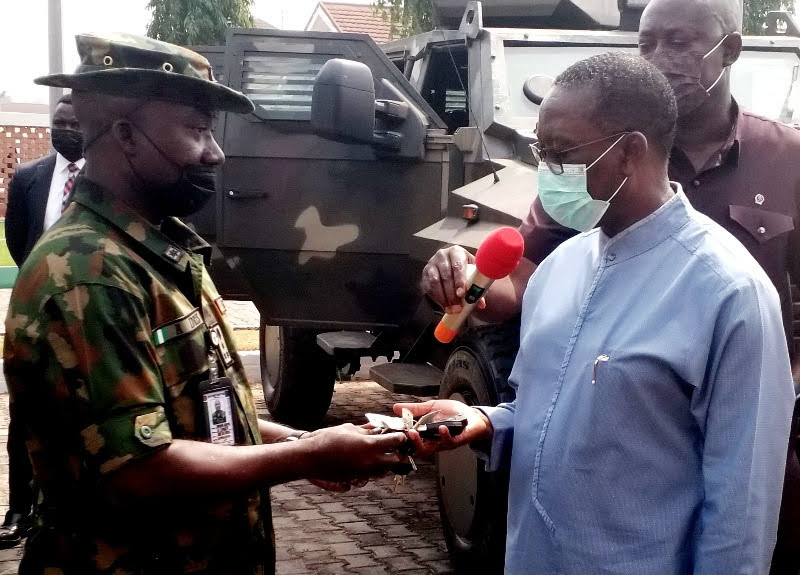 Delta Government on Wednesday handed over 5 armoured personnel carriers to the 63 Brigade, Nigerian Army and the state police command to strengthen their operations.

Presenting the armoured vehicles shortly after the State Security Council Meeting held at Government House, Asaba, Governor Ifeanyi Okowa said three of the security vehicles were for the Army while two were for the Police.

He expressed appreciation to the various security commands in the state for the work that they have been doing to consolidate on the peace and security in the state.

According to him, the various security commands have been doing so well to keep Delta State peaceful, pointing out that it was his hope that the state government’s gesture would add up to the vehicular needs that will enable them carry out their operations.

“We have just risen from a Security Council Meeting where we discussed a lot of issues concerning the security of the state.

“And we also expressed our appreciations to the various commands for the work that they have been doing to consolidate on the peace that we have in our state.

“In furtherance of the various logistics provisions for the Army and the Police, this afternoon, we are handing over two Armoured Personnel Carriers specially built for the Army.

“So, we are glad that at this point in time in this early part of the year, that the remaining two to the 63 Brigade have been delivered.

“We do hope that in the course of the year, we will be in a position to also provide other logistic needs for the various commands.

“They have been doing so well to keep Delta State peaceful and we are very grateful and we hope that this will add up to the vehicular needs that will enable them carry out their operations,” the governor said.

Highlight of the ceremony was the handing of keys of the Amoured Personnel Carriers for the Army to the 63 Brigade Commander, Brig. General Abdulraman Idris and State Commissioner of Police, Mr Mohammed Ari.