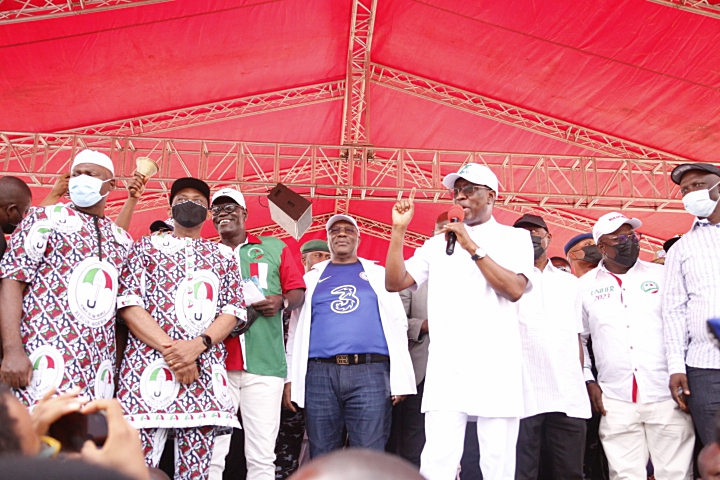 Delta Governor, Senator (Dr) Ifeanyi Okowa, has assured members of the Peoples Democratic Party (PDP) in the state of free, fair and transparent primary elections ahead of 2023 general elections.

The governor spoke even as former governor James Onanefe Ibori thanked Governor Okowa for the job he is doing in Delta and at the national level for the benefit of Nigerians.

Governor Okowa gave the assurance while addressing PDP faithful at a mega rally organised by the party in Delta at the Cenotaph, Asaba, on Saturday, and affirmed that PDP remained one united family in the state.

He assured that leaders of the party in the state would ensure that primaries for all elective positions were free and credible.

He said that the massive mobilisation for the rally showed that PDP was ready to rescue Nigeria from the ruling All Progressives Congress (APC) and advised aspirants in other political parties not to waste their money to contest elections in Delta.

“I give thanks to God for what is happening here today and I thank our leaders in the PDP, our state and local government executives, our youths and women for the massive mobilisation for this rally.

“It is by the grace of God and through their hands that we have mobilised to make a statement today across Nigeria that PDP is prepared to take over this nation.

“We work as a family with the love of God but in the other parties, they are always fighting themselves,” the governor said.

He thanked Deltans for their great support and cooperation with his administration, saying “we have been doing a great job as Deltans, but it is because Deltans voted us into power and that is why we have the opportunity to do the great job that we are doing for our state.

“We are advising those who want to run in other political parties not to waste their time and money because there is no space for them in Delta”.

Okowa remarked that his administration had done quite a lot since inception, explaining that he had appointed many youths into government and that never in the history of the state had youths been so appointed into various offices in the state.
“Never in the history of this state have youths been so empowered through our various empowerment and entrepreneurship programmes.

On infrastructure, the governor assured Deltans that his administration would not slow down in constructing more roads, saying “until I leave office in May, 2023, we will continue to build more and more roads and for those who haven’t been to Asaba in recent times, when you see our new State Secretariat you will be proud that you are a Deltan.

“All our achievements are the collective efforts of all Deltans because you gave us the peace to work and we can’t thank you enough.”

He advised aspirants to control their followers, noting that there was no need for any fight as the party remained one big united family.

“We are one family in PDP; we cannot fight and we will never fight; at the appropriate time, it will be well with us.

“But, one thing I have always promised and I still promise today is that there will always be free and fair primaries; so, there is no room to fight.

“There is no room to quarrel, let us work together as one family that we are and ensure that PDP stays continuously as a family,” he stressed.

“I thank you for the job you are doing in Delta and at the national level for the benefit of Nigerians.

“I most especially thank you for what I am seeing here today because you have done very well in Delta State and I cannot be more proud that you are our governor today.

“You are leading us very well and it is our duty, and we are all committed to say that you will finish very strong and at the end of the day we will all gather to thank God for you.

“Of a truth, this was the philosophy behind the formation of this great party when I said in 1998 that democracy is about opening up the space and environment for everybody to aspire to whatever he or she believes in and I thank you for continuing with that vision.

“I want to thank you on behalf of teeming members of our party and pray that God will continue to guide you as you lead us in the years ahead,’’ Ibori said.

He added that he personally didn’t “believe that your leadership will terminate at the end of your tenure as governor; I don’t believe that.

“On behalf of my one vote, my unit in Ogharefe, Ethiope West Local Government Area, I want to commit and dedicate myself to the service of PDP Delta State and Nigeria at large”.

Welcoming defectors to the party earlier, Chairman of PDP in the state, Chief Kingsley Esiso,  said that the rally was primarily organised to welcome decampees from APC and other political parties.

Esiso said that the massive exodus from APC was a testimony that the party has failed Nigerians in all ramifications.

“I can tell you that the primary purpose of this rally is to reduce the opposition party in Delta State by 90 per cent.

“My heart is full of joy and a testimony that APC is a failed political party and the people of Delta have come to realise that APC has only come to bring us economic hardship, poverty, banditry, kidnapping and failed promises.

“It is therefore not a surprise that every reasonable member of the APC is jumping ship to join us.

“Today, we are harvesting many of their leaders from different local government areas and we are celebrating this victory for our great party,” he said.

The defectors to the PDP, who were in large number and led by former Chairman of APC in the state, Chief Cyril Ogodo, pledged to work for the PDP to ensure that APC was no more in the state.

He said while declaring for PDP: “I have come to do one thing and that is to scatter APC in Delta State; today APC is scattered!”