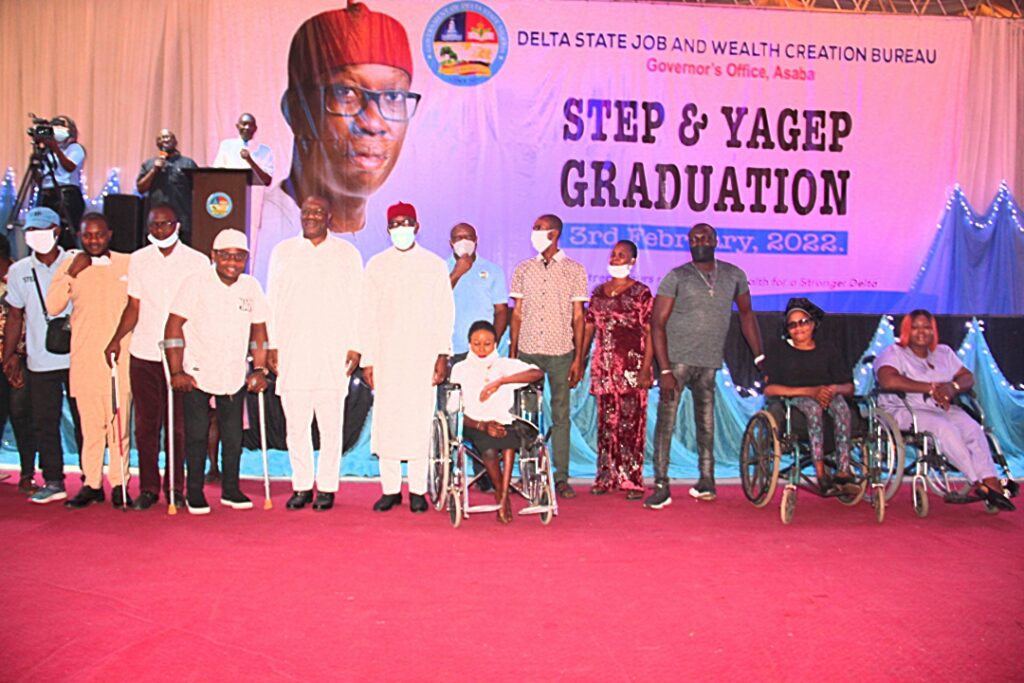 Be wary of mischief makers, Okowa tells Deltans, as 1,000 grauduates from STEP, YAGEP

He said only enemies of the youths would criticise what his administration was doing for the youths of the state.

He warned that henceforth, the state government would no longer tolerate people registering in other programmes after they had been trained and empowered in another programme.

He stressed that such acts were inimical to the progress of the state as perpetrators were blocking the chances of other Deltans from benefiting from the various job creation schemes.

Okowa said: “Recently I hear some people criticise what we are doing for the youths of our state, they speak in manners that are becoming nauseating.

“We don’t want to praise ourselves as a government but when I hear some people saying that the Dr Okowa’s administration is doing nothing, I begin to wonder whether they are in Delta State or whether they are talking about other states.

“When we recognised that we are doing a lot in infrastructure in such a manner that has earned us recognition but I know that our greatest strong point is in ensuring that we give our youths the necessary skills to keep them strong and keep hope alive.

“Our youth training programmes both the STEPreneurship, YAGEPreneurship and other programmes is our strongest point and we have no apologies about it.

“We know that today Delta is one of the most peaceful states and it is because the youths are working in collaboration with the government.

“This is so because our youths are responsible they are passionate about their future and about this state, and the youths of Delta wants us to have a great state.

“We will ignore what they say but its important for us as youths that as we go into the future to realise that in order to keep the future of the current youths and those who are growing up, we must learn to exercise our political rights in such a manner that we do not waste our votes for those who do not mean well.

“I say so because anybody criticizing what we are doing in collaboration with our youths does not obviously mean well for the state and such a person is an enemy to the youths.

“I want to urge you to stay strong, focused and we believe that together we can ensure the continuity and the growth of our various youth entrepreneurship programmes if you partner with us as we go into the new dispensation that is coming.

“It is well with our state and I use this opportunity to thank our traditional rulers for their support and prayers for the success of this administration.

“Am confident that you will make us proud going into the future and we will proud that we laid the foundation and that was built upon,” he stated.

The Governor lauded the Job and Wealth Creation Bureau for its diligent and professional handling of the programmes to become a major success story of his administration.

He assured that with the enabling law establishing the Delta State Job and Wealth Creation Bureau, the state’s job creation programmes would be sustained beyond his administration.

He commended the youths of the state for their dexterity and focus, assuring that in years to come the benefits of the programme would be manifest nationwide.

“We need to stand strong no matter the storm of life and one day you will excell in what you are doing, staying strong and believing in God is the key to success.

“You have made me proud as a governor and I must return my thanks to all the youths who have gone through this programme because if you had failed it would have discouraged us from continuing with it.

“We have expanded it beyond the Job and Wealth Creation Office including the RYSA Programme in the Ministry of Youths, GEST, WESAP and the ICT-YEP,” he said.

The Governor who was flanked by his Deputy, Mr Kingsley Otuaro paid glowing tribute to the people who gave life to the program including Dr Kingsley Emu, Professor Eric Eboh, Dr Kingsley Obiora Deputy Governor of Central Bank of Nigeria and Hon. Festus Agas among others.

He announced a cash reward of N500,000 each for 75 outstanding STEPreneurs and YAGEPreneurs adopted into the Job Creation Hall of Fame.

Welcoming guests earlier, Director-General of the Delta State Job and Wealth Creation Bureau, Professor Eric Eboh said the ceremony marks the formal closure of the 2020/2021 cycle of STEP and YAGEP, the 6th in the job creation programme series since 2015.

He said the cycle covered 1,000 beneficiaries comprising 654 STEPreneurs and 346 YAGEPreneurs, including 25 Persons with Disabilities (PwDs), one in each of the 25 Local Government Areas.

According to him, all 1,000 beneficiaries have been duly trained in occupational, entrepreneurial and business skills and have been given starter packs and shop rent support.

“Beneficiaries were given starter packs and support packages in batches upon successful completion of all the phases of training and fulfilling the eligibility requirements.

“Altogether, the job creation programmes – STEP and YAGEP – have covered 6,074 beneficiaries from 2015 to date. This number is part of the expanding portfolio of the state government’s job creation and youth empowerment programmes including RYSA, GEST, WESAP and ICT-YEP.

“In addition to the 1,000 graduands gathered here today, we have assembled a small sample of outstanding previous STEPreneurs and YAGEPreneurs already profiled in the STEP & YAGEP Hall of Fame.

He said the Bureau has created some institutional development tools developed and already being applied by Delta Job and Wealth Creation Bureau to ensure organizational and programme sustainability into the future.

“The sustainability tools include our online programme management information system (MIS); the Job Creation Magazine series published since 2015; the satellite-based digital survey map of all verified YAGEP farm enterprises throughout the state and the 5-Yr Masterplan of Delta State Job and Wealth Creation Bureau.

“All 1,000 beneficiaries here today are particularly happy and excited about this unique opportunity to say thank you and to receive your fatherly blessings for their enterprise endeavours,” Prof. Eboh stated.

In their valedictory speech, Gure Oghenetejiri, a STEPreneur in POP, Screeding and Painting from Ughelli North and Onakpoya Evuarhere, a Poultry YAGEPreneur from Ethiope East commended Governor Ifeanyi Okowa and the state government for the life opportunity given to them to acquire skills and become business owners.