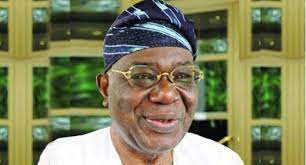 The News Agency of Nigeria (NAN) reports that the church service was held on Friday at the Cathedral Church of Christ, Marina, Lagos.

He would be laid to rest at the Ebony Vaults, Ikoyi.

Other dignitaries at the occasion include the Secretary to the Government of the Federation, Mr Boss Mustapha, Gov. Babajide Sanwo-Olu of Lagos State, Gov. Dapo Abiodun of Ogun and Gov. Godwin Obaseki of Edo.

In his sermon, a former Primate of the Church of Nigeria (Anglican Communion), Most Rev. Peter Akinola, said that late Shonekan put his life on the line for the sake of Nigeria, urging leaders to do same.

The cleric said that many people advised Shonekan not to take up the job of heading the interim government because of the risk of likelihood of a coup, but Shonekan considered Nigeria more important.

“Even the church refused to give Shonekan the benefit of the doubt while some political opportunists demonised him and called him unprintable names.

“He puts his life on the line for the sake of this country. Perhaps, we would like to know that Shonekan was not completely unaware that the coup would take place.

“Shonekan, not being typically ambitious like some politicians, refused to do many things to preserve himself in office,” he said.

Akinola said that Shonekan had done all that God enabled him to do for himself, his family,  church and Nigeria.

“He has finished his race and now asleep in the Lord.

“When he rises up at the end of time, it will be in the glorious eternal kingdom of God.

“Let us, therefore be careful with the life we live.

“Let us be wary of judging others, especially when we don’t have all the facts of the matter,” he advised.

Others are the Minister of State for Health, Dr Olorunnimbe Mamora; his Works and Housing counterpart, Mr Mu’azu Sambo; and Primate Henry Ndukuba of the Church of Nigeria.

The funeral service featured choir renditions, prayers for the deceased, his family and the nation, with Holy Communion served.

The body of Shonekan left the church at 1:30 p.m. for Ebony Vaults, Ikoyi, for internment. (NAN) (www.nannews.ng)