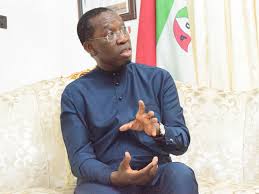 PERSPECTIVE – Musings on the myths, mysteries, potholes around the 2023 guber elections in Delta

In 2015, it was simplistic just to assume that it was the turn of the Delta North to produce the Governor. The forces that rose against the Delta North bid for the plum job of Governor assumed a spiritual dimension of principalities and powers. The Urhobos vehemently opposed it as it became the prime message in the famous “Uvwiamuge declaration” which ascribed to the Urhobos, the divine right to rule in perpetuity.

The then Governor of Delta State, Dr. Emmanuel Uduaghan, goaded on by extraneous forces abandoned his pet Tony Obuh project and heavily supported the UPU backed David Edevbie in a bid to upstage Dr. Ifeanyi Okowa, who was regarded by Uduaghan as not only his Political rival but also his mortal Political enemy. The Delta North Traditional Rulers led by HRM Professor Chike Edozien, the Asagba of Asaba, not taking power shift for granted, mounted a very sophisticated barricade against any opposition to the Delta North quest. The Delta North Royal fathers established a screening committee for all Delta North Governorship aspirants and at the end arrived at Dr. Ifeanyi Okowa as the most favoured aspirant to take the Delta State Political mantle. The Okowa mystique began to unfold as the man with a very gentle, almost harmless mien began to demolish all obstacles on his path to Osadebey House.

Dr. Ifeanyi Okowa was to kick-start one of the most sophisticated Governorship campaigns ever to be recorded in the history of Delta State. His only constraint was finance and Dr. Uduaghan was ready to starve him of it. In the twilight of the Delta North Governorship primaries of 8th December, 2014, the Dr. Ifeanyi Okowa campaign organisation ran broke and threatened by the heavily funded campaign mounted by the David Edevbie group. Dr. Ifeanyi Okowa reportedly found succour with Mr. Government Ekpemukpolo (aka, Tompolo), who provided the needed funds for the Governorship primaries. The Event Centre, venue of the Primaries was heavily secured by Ijaw militants who were allegedly given instructions to raze down the Event Centre in the event that Dr. Uduaghan succumbed to pressures on him to rig the primaries in favour of David Edevbie. Dr. Uduaghan saw the dangers and allowed his Political enemy to succeed him. Dr. Okowa won the Primaries. But there was a heavy prize. Dr. Okowa had allegedly agreed reciprocally to hand over power to his benefactors at the end of his eight -year term in 2023.

By the middle of 2021, the terms, conditions and spirit of the agreement by Dr. Ifeanyi Okowa with Tompolo and his Ijaw kith and kin had begun to really disturb Dr. Okowa who perhaps acceded to their quest under pressure. Dr. Okowa realised that the Ijaws had formed a huge barricade of support for him from 2015 till date and was not in a hurry to repudiate the agreement with the Ijaws. Dr. Okowa also knew that the Ijaws had supported his predecessors, Chief Onanefe Ibori and Dr.Emmanuel Uduaghan and needed to be reciprocated and assuaged.

Of deeper worry for Dr. Okowa was the formation of the DC-23 lobby group, a formidable structure that was unrelenting in their quest to produce a governor of Urhobo extraction in 2023. Although, Dr. Ifeanyi Okowa is reputed to be very taciturn in revealing the content of his mind concerning the direction of his successor, his utterances, body language and actions sometimes betray his inner thoughts.

In an innocuous programme designed by Hon. Ndudi Elumelu in 2021 to empower his constituents, Dr. Okowa made a dramatic appearance where he made a controversial statement that there has never been any Governorship power shift agreement in Delta State. He was perhaps alluding to the claim by the DC-23 lobby group that it was the turn of the Delta Central to produce the Governor since the governorship rotation has gone full circle. Dr. Okowa went ahead,

on another occasion to prescribe the qualities of his successor, one of which was that the successor must love and respect Asaba as the Delta State Capital.

Analysts know that Dr. Okowa was merely using Asaba as a metaphor. It is believed that what he may have meant was that his successor must treat Delta State fairly and should probably not be vindictive towards his own kinsmen of Owa Kingdom. Again, Dr. Okowa was to embark on an earth shaking dissolution of his cabinet which, some opinionated persons alleged was targeted at some of Ibori’s core loyalists including but not limited to the Chief of Staff, David Edevbie and Chinedu Ebie, the Secretary to the State Government, SSG. It is unclear why Dr. Okowa also chose not to reappoint the Director-General of the Delta PDP Campaign organization that campaigned for his re-election and who was later appointed Senior Political Adviser, Rt. Hon. Funkekeme Solomon. But that is a story for another day. Although, it must be noted that Dr. Okowa had stated clearly that those who seek to contest elections should make their interest known so they can be let off to face their election demands and not be burdened with another cabinet appointment so as not to distract them from their ambitions. He also told journalists at one of his media briefings that not persons seeking elective positions will keep his cabinet members focused on delivering on the service delivery of the governance mandate given to him to fulfill.

We must however, recall that Dr. Okowa, a skilful player and an ardent student of the 48 laws of power may have appointed David Edevbie, his former opponent in the 8th December, 2014 Governorship Primaries, a Commissioner of Finance in 2015 and later a Chief of Staff in 2019 not out of love or trust but to keep him close enough to be able to exterminate him politically. This is not a new political strategy. Dr. Uduaghan also appointed Dr. Okowa as SSG in 2007 in spite of the formidable challenge the latter gave the former in the governorship primaries at Ogwashi-Uku. It was the same Uduaghan that almost prevented Dr. Okowa from succeeding him.

ERRORS AND ASSUMPTIONS BY THE DC-23 LOBBY GROUP

The DC-23 started its journey based on a wrong assumption that power was to shift to Delta Central in 2023. The truth is that there was never a time the PDP had agreed on a zoning formula. Even if there was, the Delta Central had always observed the agreement in the breach. In 2007 when Ibori was finishing his term, Great Ogboru and Ovie Omo-Agege and other Urhobos still contested the Primaries with Dr. Uduaghan. In 2015, Dr. Okowa faced severe opposition from Delta Central which presented Olorogun David Edevbie. Dr. Okowa narrowly missed the trap emerging as the candidate of the PDP in the 2015 Governorship election.

The DC-23 lobby group pretends not to know that there are five ethnic nationalities in Delta State: Anioma, Isoko, Ijaw, Itsekiris and the Urhobos. Even recently, the Ndokwa Nation has started an agitation that they are not part of Anioma as they constitute a separate ethnic identity with a distinct linguistic and cultural affinity. The Delta South Senatorial district also has three district ethnic nationalities – the Ijaws, the Itsekiris and the Isokos – with their languages and culture almost mutually unintelligible. That Dr. Uduaghan, an Itsekiri was governor from 2007 – 2015 does not translate to occupying the position of the Ijaws and the Isokos. It is also suspected that the DC-23 is working from answer to question having zeroed in on a particular aspirant even before the screening commenced.

It should be noted that Kenneth Gbagi, the stormy petrol of Urhobo politics will never accept any screening process that truncates his lifelong ambition. The same goes for James Augoye, Agwariavwodo, Fred Majemite and others. The DC-23 has just wasted precious time, resources and energy. The final DC-23 document is only fit for the trash can.

TABLE SHOWING THAT THERE HAS NEVER BEEN POWER SHIFT

ARRANGEMENT IN DELTA STATE FROM 1999 – DATE BY PDP.

Others who contested from

Not much opposition from

FURTHER ASSUMPTIONS BY THE DC-23 SCREENING/PRUNING

The DC-23 is not a political party and cannot play its role. It is also not an electoral body and has no legal powers whatsoever. Many of the aspirants that have been out-screened by the DC-23 screening committee will still contest the PDP Governorship Primaries and this would lead to an implosion in the DC-23 camp.

It is therefore, a fallacy of enormous proportions to assume that power must now return to the Delta Central in 2023. What happens to the Isokos and the Ijaws and even the Ndokwa Nation? Let it be known that the Isokos, the Ijaws and even the Ndokwa people have never had a taste of the governorship from 1999 – date. Any other contraption that does not accommodate every ethnic nationality is an invitation to anarchy.

The claim of the Ijaws for the 2023 Governorship is therefore legitimate, justifiable and very germane. Politically, the Ijaws have supported every successive government since 1999. The Ijaws specifically stood behind Dr. Okowa very stoutly in 2015 and 2019. The Ijaws see 2023 as payback time for their consistent patience, loyalty and dedication to the Delta State political experiment and for keeping the State as one indivisible entity. The militants of Ijaw had respectfully demilitarized their operations throughout the period of Dr. Okowa’s government out of loyalty and respect. The Ijaws have thus contributed immeasurably to the stability of the State and national economy by protecting the pipelines and keeping militants in check in spite of glaring marginalisation of the ethnic nationality in National distribution of resources.

We had thought that the late night meeting of PDP leaders and ex-governors in Government House that preceded the PDP mega rally in Asaba would put paid to the seemingly intractable zoning problems. It rather worsened it. The dramatic visit of James Ibori to Tompolo in the creek of Oporoza further heightened fears that Ibori and Okowa are yet to come to terms on where and who should be Okowa’s successor. Just as we were doing our wait and see game, the DC-23 has announced that the three men standing after the screening of Delta Central aspirants are David Edevbie, Sheriff Oborevwori and Kenneth Gbagi.

As I look at these aspirants with my political lenses, I also imagine how they can stand against a formidable machine like Ovie-Omo-Agege in an election. Let all the aspirants from all three senatorial districts go for the primaries so that the best among the lot can emerge in a free and fair Primaries election. This is no time to talk about some bogus zoning formula. The Delta State political climate has become too sophisticated for such narrow narcissistic reasoning.

All Delta State Political stakeholders should put their hands on deck to ensure that the right thing is done. 2023 is different from previous years. We need a leader that would take Delta State to the Eldorado irrespective of where he comes from. The DC-23 lobby group’s position is an invitation to mediocrity and well-meaning Deltans especially civil society organisations will not allow it.