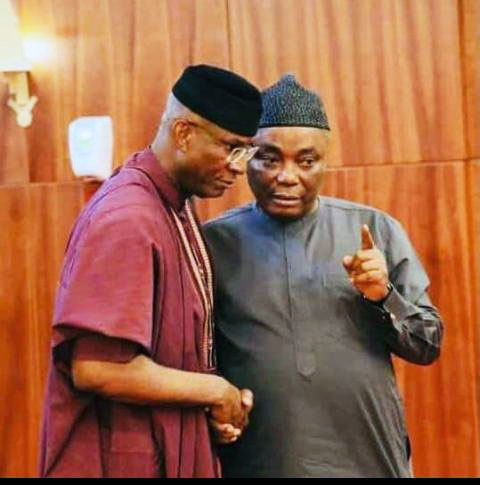 The Deputy Senate President and senator representing Delta Central Senatorial District, Senator Ovie Omo-Agege has boasted that the All Progressives Congress (APC) will produce the successor to  incumbent President Muhammadu Buhari in 2023.

The Senator spoke in Asaba while congratulating the Chief Omeni Sobotie shortly after the later was sworn-in as Delta State Chairman of APC, along with the other new members of the state party executives at the function where Senator Peter Nwaoboshi declared that he cannot return to his vomit by going back to PDP.

Omo-Agege told the APC faithful at the party’s State secretariat, Asaba: “Let me tell you a small secret; APC will produce the president in 2023. There’s nothing anyone can do about it.”

Also speaking in similar tone like his colleague, Senator Peter Nwaoboshi, representing Delta North in the Senate who spoke earlier, Senator Omo-Agege said: “Our goal is to defeat Okowa and whoever he wants to impose as governorship candidate,” pointing out that it’s the people of Delta State who will determine who will represent them at the legislative houses.

“There’s no trick in the books that we are not privy to; if not times two,” Omo-Agege said.

About those said to have decamped from APC to PDP in the State, the Deputy Senate President congratulated them, who he described as the Biblical Akhans. He said: “Congratulations to the Biblical Akhans who have left our party so that we can enter into the promised Land. It’s good riddance to very bad rubbish.”

He however talked about the New Testament teaching on repentance, saying that “should they repent, they will be welcomed back.”

Congratulating Chief Sobotie and his executive on their inauguration, Senator Omo-Agege urged him to extend a hand of fellowship to all, including those who did not support his emergence. “Now that the contest has come and gone, I urge you to rise and take everybody in, by reaching out to them,” he counseled.

Earlier, Senator Peter Nwaoboshi was full of sarcasm for the PDP, declaring cynically that “they are busy planning to rig the 2023 elections, but there’s nothing they are going to plan that we don’t know.”

He continued: “There’s no rigging plan that I don’t know. The battle has started. It’s total war. Not the war involving the use of firearms; but they will have themselves to blame should they try that.

“Today, our incoming governor (referring to Senator Omo-Agege), and we are well equipped to pull PDP out of Government House.

“We know there are human beings in Delta State who will pull them out. The battle we are fighting is for you the younger people, because it’s you who will be appointed commissioners, Special Assistants, etc. I won’t be going for such.

“Some people said I will go back to PDP, I don’t have any intention of going back to PDP,” and speaking in vernacular, which also translates “I cannot return to my vomit.

“But I have the intention of defeating the PDP,” Nwaoboshi said.