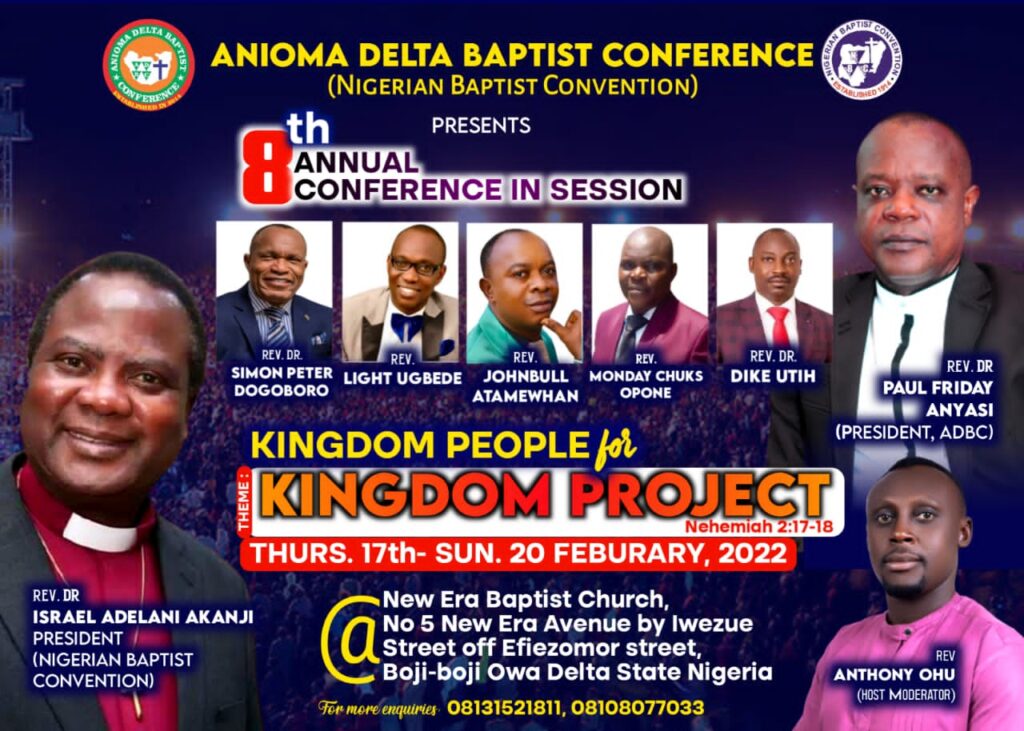 Congregants of the Anioma Delta Baptists have been given the charge to take after the Biblical Nehamiah and “Arise and Build’ in fulfillment of the demands of scriptures for the development of the Kingdom.

Over 3000 messengers drawn from the 140 Baptist Churches within the Delta North Senatorial District in Delta State, gathered Thursday, February 17, 2022 for the 8th Annual session of the Anioma Delta Baptist Conference of the Nigerian Baptist Convention.

The Annual Session holding at the New Era Baptist Church, Boji-Boji, Owa in Ika North East Local Government Area of the State, with the Conference President and Spiritual Leader, Rev’d Dr. Paul Anyasi in attendance, was declared open by the Chairman of the Conference, Rev’d Monday Opone.

Rev’d Johnbull Atamhenwan alongside other Conference officials that included Associations Moderators and other notable Baptist Ministers were also in attendance at the opening session.

Welcoming messengers, the Conference President, Rev’d Dr Paul Anyasi expressed joy and appreciation to God Almighty for sustaining and keeping them to witness this year’s Annual Conference-in-Session, saying that it is always a great deal of miracle surviving any year.

“From February 2021 to February 2022, a lot of people have died. They did not pray to die, nobody prays to die, but you see, God in his infinite mercy kept us alive.

The Spiritual Leader urged them to open up their hearts, in great anticipation to receive and be blessed by God throughout the duration of the annual session, even as he called on them to be active participants in all the organizational meetings.

In his opening message at the Annual Session, with the theme, “Kingdom People For Kingdom Project,” the Conference Chairman, Rev’d Monday Opone, spoke extensively on the urgent need for members to raise and build a formidable Conference that would be a source of pride among comity of Conferences within the Nigerian Baptist Convention.

He said that building a Conference that is formidable could be possible when members collectively desire to come together to build while making the progress of the Conference their concern.

“The creation of the Anioma Baptist Conference is not a mistake. We desired for it and God gave it to us. I pray that it will not be long the desire of the Conference will come to reality, but we need to be alive with our responsibilities as kingdom people with a view to sustaining and stabilizing the Conference through the grace and favour of God,” he said.

While praying to God to give members the enablement to raise and build an enviable project for the stability of the Anioma Delta Baptist Conference, Rev’d Opone articulated what needed to be done, saying that members need to understand the common vision of the Conference to arise and build.

Rev’d Opone who described Kingdom peoples as believers who has accepted Jesus Christ as their Lord and master, said also that for Kingdom people to arise and build, they must work as a term, be courageous, and encourage one another, involving God at all time as well as pray and mobilize support for the kingdom project.

Highpoint at the opening session was prayers led by Rev. Samuel Okobia, consecrated high praise and worship as well as classical hymn of adoration rendered by the Praise Team as coordinated by the Music Director of the Conference, Rev. Mrs. Nkechi Ewiwilem.

The annual Conference-In-Session continues today Friday, with the General Session.