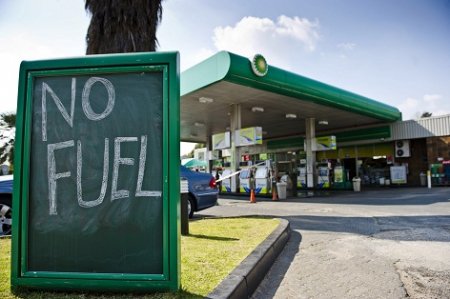 Chief_editor February 21, 2022
By Ambrose Ologide
Some concerned consumers of fuel in Uvwie and Warri South Local Government areas of Delta State have bemoaned alleged sharp practices by some petroleum marketers in the prevailing fuel scarcity.
The Chairman of the Association of Proprietors of Private School Owners of Nigeria ( APSON ), Warri South Local Government Area Chapter, Comrade Mike Oritseweyimi Eboh, noted that some fuel marketers in Warri had worsen the fuel scarcity, accusing them of hoarding and selling the product at exorbitant prices during the night.
Eboh who is also the Proprietor of the famous Trust International School in Warri stated that the said petroleum marketers had been waiting for an opportunity to exploit consumers, adding that “this is sheer wickedness. We should be our brothers keepers.”
” On Sundays,  you will see some of the shylock petroleum marketers playing holy by giving tithes and offerings with their ill gotten money in churches.” he added.
Another respondent, Mrs Janet Ejaita, spoke in the  same vein as she also alleged that most filling stations sold their products at night  to avoid being monitored by  officials of DPR.
She further alleged that the pump price of a litre of fuel during the late hours transaction was #200 and above and that some filling stations used calculators  during such illicit sales.
Ejaita called on officials of the  DPR to work beyond government official hour of 4pm in order to  checkmate the nafaruios activities of the said filling stations.
A commercial  bus driver, Jones Okon, noted that road side black marketers were having a field day in the fuel scarcity situation, alleging that some filling stations preferred dispensing only to road side black marketers late in the night.
A survey  indicated that a litre of fuel in the black market in both local government areas was sold for #250 and above.
It is interesting to note that there had not been increase in transport fare in Uvwie and Warri South Local Government areas since the fuel scarcity started biting hard in the localities.