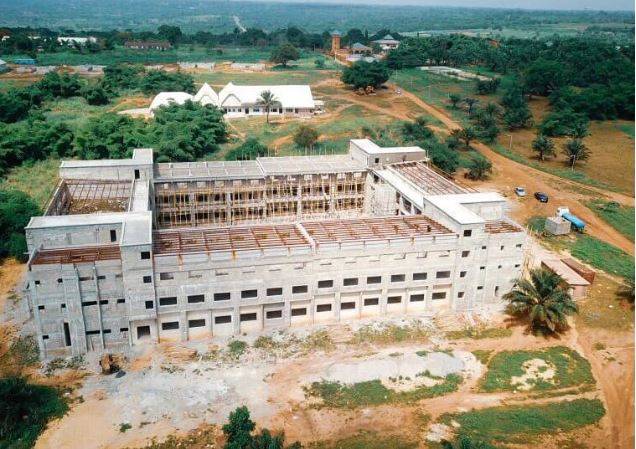 Swipe has several times be taken at persons who ignorantly or out of mischief try to paint the erroneous impression that the land acquisition for university project in Idumuje-Ugboko is related to the murder and terrorism cases in different courts in the country. To this end, it has become necessary to set record straight by recounting the processes that led to the land acquisition and the mayhem of 2017 in Idumuje-Ugboko.

Idumuje-Ugboko, a community in Aniocha North Local Government Area of Delta State had a land case with neighbouring Onicha-Ugbo, which lasted for 13 years (1956-1969) and was resolved in favour of Idumuje Ugboko. This piece of land was mapped out as development area where any son or daughter of the community can apply to establish development structures.

In 1978, a portion of this land was mapped out for the establishment of a secondary school while other sons of the community also benefitted from land allocation in the area. This was the prevalent situation when on the 10th of March 2015 LINAS INTERNATIONAL LTD. owned by Prince Ned Nwoko, applied to HRM Obi Albert Nwoko III for a 90 hectares of land for the establishment of a university and standard international Golf Course.

The Obi in a letter dated April, 2015 and addressed to LINAS INTERNATIONAL LTD. approved the request after due consultations with the community and due diligence work done by the Land Allocation Committee in conjunction with the Azu Ani committee. After the approval by HRM Obi Albert Nwoko representatives of the Four Federating Villages, principal Chiefs and the Izu Ani committee was set up for the purpose of implementing the decisions of the community. The committee recommended that the community will have a 40% equity share for the Golf Course project leaving Prince Ned Nwoko through LINAS INTERNATIONAL LTD. with the remaining 60% equity shares.A memorandum of Understanding (MOU) was signed LINAS INTERNATIONAL LTD. and the community. Significantly, the MOU was superintended by Barr. Mbanefo Nwoko, acting as counsel to the community and Barr. Geoff. Nkikonye as counsel to Linas International Ltd. The Chairman of the Land Allocation Committee was Chief Christopher Ogwu, the Iyese (Prime Minister) while the secretary was late Somayina Gabriel Nwoko.

SUDDEN UNEXPECTED DEVELOPMENT FROM THE PALACE

In August 2015 a counter letter dated 12 August 2015, addressed to no one in particular and purported from Obi Albert Nwoko was circulated by some of Prince Chukwunonso Nwoko’s agents namely Ejimofor Frederick Nwoko, Richard Obiajulu Nwoko, Dennis Uwadiegwu Nwoko and others in churches and to some chiefs the content of which countered the earlier letter of approval of land for Prince Ned Nwoko to establish his legacy Projects. To give impetus to the counter letter it was published as an Advertorial in Vanguard Newspaper through their lawyer, Barr. Frank Esenwah. Sensing crises, a notable citizen of the community petitioned the commissioner of Police, Delta Police Command in a letter dated 14th September, 2015. The Police authorities took time to subject the letter of approval for the University project and the countering letter to scrutiny and found the countering letter to be forged by Prince Nonso Nwoko and his agents. They were prosecuted for forgery.

At this point Prince Chukwunonso Nwoko sensing that his plot was failing became unsettled and went after all supporters of the University project. In the process about 29 homes were destroyed, their owners subjected to maximum physical assault and their means of livelihood dislocated.

The Iyese of the community, Chief Christopher Ogwu, the Traditional Defence Minister, Chief Sunday Edemodu and several others were beaten to stupor. An innocent Benue born innocent Okada rider was killed right at the front of the palace at the pleasure of Prince Chukwunonso Nwoko. Also an indigene, Kennedy Iloh was severely beaten and he later died from injuries he sustained from the hands of Chukwunonso Nwoko’s thugs.

The police has since invited the suspects in the horrendous attacks and are in various courts of competent jurisdiction answering to charges of terrorism and murder. Some of the known suspects are Prince Chukwunonso Nwoko, Prince Frederick Ejimofor, Prince Dennis Uwadiegwu, Ndudi Chiejume, Onwochie Agiliga Light, Raymond Omesiete, Adim Nwafor, Okey Ifejoku, Azuka Mukolu,Omonye Esonye and Aikhomo Omezi.

It should be noted that Prince Ned Nwoko refused to support Chukwunonso’s bid to succeed his father as he rather preferred Uche Nwoko. Based on this, Chukwunonso Nwoko swore that he would cancel the approval of the land for the university through any means. The forgery and attacks on those supporting university are as a result of Chukwunonso Nwoko’s threat.

THE TRIAL OF SUSPECTS FOR TERRORISM AND MURDER NOT RELATED TO LAND ALLOCATION IN IDUMUJE UGBOKO.

For several years some sponsored mischief makers have tried to misdirect Nigerians by claiming that the suspects being tried for terrorism and murder are being tried for their opposition to forceful land acquisition by Prince Ned Nwoko in the community.

The plot is to garner sympathy and delay justice for the victims of the 2017 Idumuje-Ugboko mayhem who. in fact, are the complainants in the cases in court. Prince Ned Nwoko has no involvement whatsoever in the travails of the culprits as it is basically self inflicted.The major culprits have hired several persons to cast aspersions on Ned Nwoko. Some of the major hirelings are Azuka Jebose, Chris Aligbe, Sunday Banye, Okey Ifejoku, Engr. Enueyibo, Chuks Nwoko, Uche Aligbe, Deji Adeyanju.

These people have been unrelenting in their falsehood that Prince Ned Nwoko has been forcefully taking over the lands of the local farmers using police escorts and intimidation. In one of such falsehood Chris Aligbe, Sunday Banye and Okey Ifejoku petitioned the Inspector General of police claiming that Prince Ned Nwoko has been grabbing lands forcefuly in Idumuje-Ugboko using the police as instruments of coercion. The IGP constituted a monitoring unit to investigate the petition and found it to be false. Sunday Banye,Okey Ifejoku and Chris Aligbe are facing trial for misinformation and would be arraigned next week in a Federal High court.

Some critical reports have vindicated Prince Ned Nwoko from complicity in alleged forceful land grabbing in Idumuje-Ugboko, some of which we would highlight here.

Following a petition by Sunday Banye, Chris Aligbe and Okey Fejoku to the IGP claiming that Ned Nwoko was forcefully claiming the lands of locals in Idumuje Ugboko using Police as escort, the IGP constituted a high powered unit to investigate the claim. At the end of the investigation the police came up with a report, a copy of which was requested by Mr Bryan Ukamdire Ukaegbu Esq. on behalf of Linas International LTD.

The relevant excerpts of the IGP monitoring unit report completely exonerated Prince Ned Nwoko of complicity in land grabbing and use of the police escorts to harass and intimidate farm owners in Idumuje-Ugboko as alleged by the petitioners. The IGP monitoring units report read in part as follows:

ix The investigation unit could not reveal any act of terrorism against the suspect as alleged by the complainants.

xi That the allegations of Police complicity in the cases being cited by the complainants could not be substantiated and the investigation could not establish any evidence or testimony to that effect. The IGP monitoring unit thereafter recommended that while the parties be advised to maintain the peace and wait for the outcome of civil suits pending in court, the complainants viz Sunday Banye, Okey Ifejoku and Chris Aligbe be charged to court for offence of making false statement against Police Officers with intent contrary to Section 125(a) and (b) of criminal code law. The complainants are to be arraigned in court next week.

“Prince Ned Nwoko first approached the Council in writing requesting for a RIGHT OF OCCUPANCY for the land given to him with the authority of the Obi of Idumuje-Ugboko, HRM Albert Nwoko. As a result of an objection I decided to pay the Obi a visit for further clarification in which I discovered that Prince Ned Nwoko’s claims were genuine as the then Obi confirmed issuing the approval letter following the recommendation by the Land Allocation Committee. The Right of Occupancy was therefore issued with the necessary procedures followed.

In yet another report by Chief Edwin Uzor, Special Adviser to the Governor on Peace building and conflict Resolution on behalf of the Delta state Government dated February 18th,2021 with the title “Report on the Kingship tussle and land acquisition crises in Idumuje-Ugboko Community” Edwin Uzor observed as follows:

“Having studied all statements, claims and counter-claims, the following were observed:

1) That the Chairman of Linas International LTD followed due process in procuring the said land.

2) That all the necessary documents such as survey plans, University brochures, HRM Obi Albert Nwoko and community approvals of the entire land was (legally) obtained.

3) There was an MOU between Linas International LTD and Idumuje Ugboko Community.

4) That the Police investigation as signed by ACP S.E Bannaniman recommended that Prince Justin Chukwunonso Nwoko be charged to court for giving false information to the Police contrary to section 125(A)of the criminal code as it is evident that his life was not threatened as alleged.

The Edwin Uzor Report went further to recommend as followsL

Following the different Reports mentioned above which exonerate Prince Ned Nwoko of illegal land acquisition in Idumuje-Ugboko, it has become necessary for us to put records straight and admonish rumour and falsehood peddlers to desist from libelous publications that have no bearing with the truth. It has been proven beyond reasonable doubt that no one has ever been arrested in Idumuje-Ugboko community because of land matters. On the contrary, people have been arrested in the community because of various crimes they committed which has no bearing with land. The general public should also be vigilant to prevent misinformation that is capable of distorting facts.