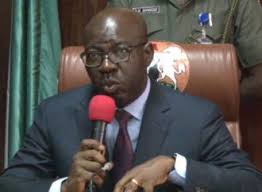 Edo to prosecute parents of out of school children

Edo State Governor, Mr. Godwin Obaseki, has said the government will begin the prosecution of parents and guardians of out-of-school children as part of measures to take all children off the streets and improve access to education.

“Every child in Edo must be in school; hence, we will not accept the ugly trend of children loitering the streets during school hours. Going forward any child found begging on the streets of Edo will be taken to one of our rehabilitation centres. We are collating the data of out-of-school children and their locations. We are working with the Department of State Services (DSS) in this regard.

“I am using this opportunity to let parents and guardians know that, as part of our policy, if we find any child out of school, the parents or guardian will be arrested and prosecuted,” he added.

Making a strong case for citizens’ participation in governance to ensure the sustainability of all ongoing reforms and policies, Obaseki said, “I am not worried about sustainability; it is you that will sustain what we are doing. So, with the right citizens’ participation, we can sustain the reforms that we have started. It is not an Obaseki reform, it’s an Edo reform.”

He continued: “We have to ask ourselves, must we continue with this culture of certificates? Because that is what is driving the issue of miracle centers; people are just after the certificate. A certificate is supposed to be evidence of learning; a certificate that is not backed by knowledge is not worth it.

“So, how do we, as a people, begin to lay less emphasis on degrees, and more emphasis on the outcome of learning? I think it is this penchant for degrees and certificates that is driving the problem. Now, we have so many people with degrees and no work.

Earlier, the state Commissioner for Education, Dr. Joan Osa-Oviawe, in her presentation, said as part of ongoing reforms in the education sector, over 2000 teachers have been recruited and trained on technology, innovative teaching and learning techniques at primary and junior secondary school.