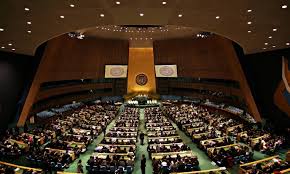 PERSPECTIVE – Sense and nonsense in Nigeria voting against Russia

The unfolding tragedy in the Ukraine’s war with Russia deserves the universal attention it is receiving. Where better to discuss it than the United Nations, UN? Where best in the UN than the Security Council which has all the powers of the world body, has teeth and can bite. But when the matter was discussed at the Security Council, it suffered defeat because that exclusive club of five permanent members that dictates to the rest of humanity, runs on veto power. That group comprising the United States, US; China and three European countries: Russia, France and the United Kingdom, UK, decide what is best for the rest of the world irrespective of the opinion of the rest of humanity.

The war is a matter in which the members of the big boys club had differing interests and the rule is that if any of them objects, no binding decision can be taken.

So, calling a meeting of the    castrated UN General Assembly on the issue became more a motion without movement; an academic exercise or more of moral suasion.

Also, the motive of calling the Assembly was more of the West showing that there are more countries that supports it than its rival Russia. A more meaningful objective would have been how the world can pressure both sides of the conflict to accept immediate ceasefire, a negotiated settlement and return of peace, more so when an escalation may have negative consequences on the world.

A non-legal or non-binding vote was taken of the 193-member assembly with 141 states voting against Russia, five in favour, 35 abstentions, while 12 did not vote. In a world supposedly wedded to democracy, this Assembly would have been an opportunity for the world to insist on changing the power relations in the UN to allow the equality of votes or the will of the majority to prevail rather than a world where the vote of a single country overrides that of the entire world. That was why the manifest evil called Apartheid in South Africa endured until 1994; because the US and UK would not allow the world take decisive steps at the UN against that Evil Empire.

When in 1976, Africa boycotted the Montreal Olympic Games because the International Olympics Committee refused to disqualify New Zealand that was making rugby tours in Apartheid South Africa, some Western countries denounced us for allegedly mixing sports with politics. Interestingly, the US boycotted the 1984 Moscow Olympic Games because the Soviet Union intervened in Afghanistan; the same country America was to invade 17 years later. Today, Russian sportsmen and women are being barred from international competitions; is this not mixing sports and politics? The point I am making is not to justify any attacks or invasion, including the war in Ukraine. Rather, it is to make the point that countries play international politics primarily based on the promotion and defence of their national interests. So in Nigeria voting against Russia at the UN Assembly, what interest was being served? National interest or a mindless casting of vote?

First, in taking sides in the intra-European squabble, we have lost the opportunity to play the needed mediatory role and lost relevance in the resolution of the Russian-Ukrainian conflict. Secondly, we lost sight of the fact that unlike the West, Russia has never constituted a threat to Nigeria or Africa. Thirdly, the Buhari administration displayed a lack of historical knowledge. The defunct Union of Soviet Socialist Republics, USSR, which was inherited by Russia, was in the forefront of the global struggles against colonialism. It applied pressure that colonies like Nigeria must be freed. Even while being colonised, the Soviets and their allies provided thousands of Nigerians scholarship to ensure an independent Nigeria has the trained manpower required to run a new country.

Moscow also provided African colonies fighting for liberation with funds, military training, arms, scholarship and vital international support. This it did in the bloody liberation wars in Algeria, Angola, Mozambique, Guinea Bissau, Cape Verde, Zimbabwe, Namibia and South Africa. The Soviets did not mind that the colonialists they armed us against were their fellow Europeans!

In the specific case of Nigeria, when the civil war broke out and countries like France and Israel equipped the then rebels with military hardware and training to secede, the UK refused to supply Nigeria needed air force equipment as it did not want the federal side to have air superiority, and the US declared itself neutral. It was Moscow that came to Nigeria’s aid. On August 2, 1967, then Information and Labour Minister, Chief Anthony Enahoro, was in Moscow to sign an arms deal, including the supply of aircraft. Soviet ally, Czechoslovakia followed six days later, agreeing to supply the federal side military aircraft and training.

The Soviet Union did not mind that Nigeria was opposed to socialism; its position according to Premier Alex Kosygin, was based on the Soviets desire to “prevent the country from being dismembered”.

Nigerian Ambassador to the Soviet Union, Brigadier George Kurubo, declared that Russian support was “responsible for the federal victory more than any other single thing, more than all other things put together”.

In November 1968, while the war was on, Moscow came to Nigeria’s aid by agreeing to provide the funds to build the crucial Kainji Dam.

Also, when in Nigeria’s quest for development it decided to build an iron and steel complex, the West refused on the basis that we did not need this mother of all industries. It was Moscow that came to our rescue by providing funds and building    the Ajaokuta Iron and Steel complex.

Nigeria as the giant of Africa forgets that in the event of a conflict between a NATO member and an African country, like the one brewing between Mali and neo-colonial France, the Europeans will collectively fight against the African country. It forgets that with the shortage of gas from Russia, desperate European countries will turn on countries like Nigeria for gas they will want virtually for free even if it means subverting us or removing a non-compliant government. This is our experience.

The basis of Buhari’s foreign policy is truly amazing: from supporting the military coup in Chad to abstaining on December 31, 2020 in the UN Resolution on: “A global call for concrete action for the elimination of racism, racial discrimination, xenophobia and related intolerance…” In other words, it refused to vote for the universal elimination of discrimination and racism!  At the UN General Assembly, Nigeria should either have abstained or not voted like its more sensible brothers such as Cameroun, Burkina Faso, Senegal, Morocco, Togo, Mali, Burundi, Equatorial Guinea and South Africa. Like we say in Nigeria: Common sense is not common.