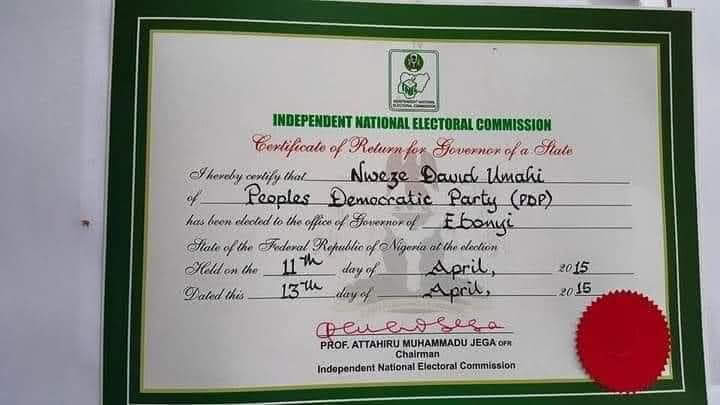 PERSPECTIVE – David Umahi: Who did you vote for, party or candidate?

Until the Supreme Court puts this to rest, and even long after that, this debate will rage on. My joy is that the Supreme Court is not just a Court of Law but also one of policy. The Law Lords will not just look at the law, but logic and commonsense surrounding the facts and the law.

Who owns the votes cast at an election? Party or candidate? My answer is, both. It is a time bound political marriage of convenience. The Constitution never contemplated a divorce before the effluxion of this time.

However, those who say the votes belong solely to the candidate even have a weaker argument. The facts of this case and the law in Faleke vs INEC doesn’t support them.

Let’s look at another fact. Who do we vote for during an election, the candidate or party? In the 2019 Ebonyi State Gubernatorial Election, was it PDP that was voted for or it was David Umahi?

This is why the Certificate of Return issued to him by INEC states that: “I hereby certify that Nweze David Umahi of Peoples Democratic Party (PDP) has been elected to the office of Governor of Ebonyi State…” Without the PDP he is nothing, but without him, the PDP still has their votes.

The APC has a particular number of votes in that election; not enough to produce a Governor. It is incongruous therefore that anyone claiming to belong to them should be Governor in 2019, or anytime thereafter, before another general election. This is a mockery of our constitutional and partisan democracy.