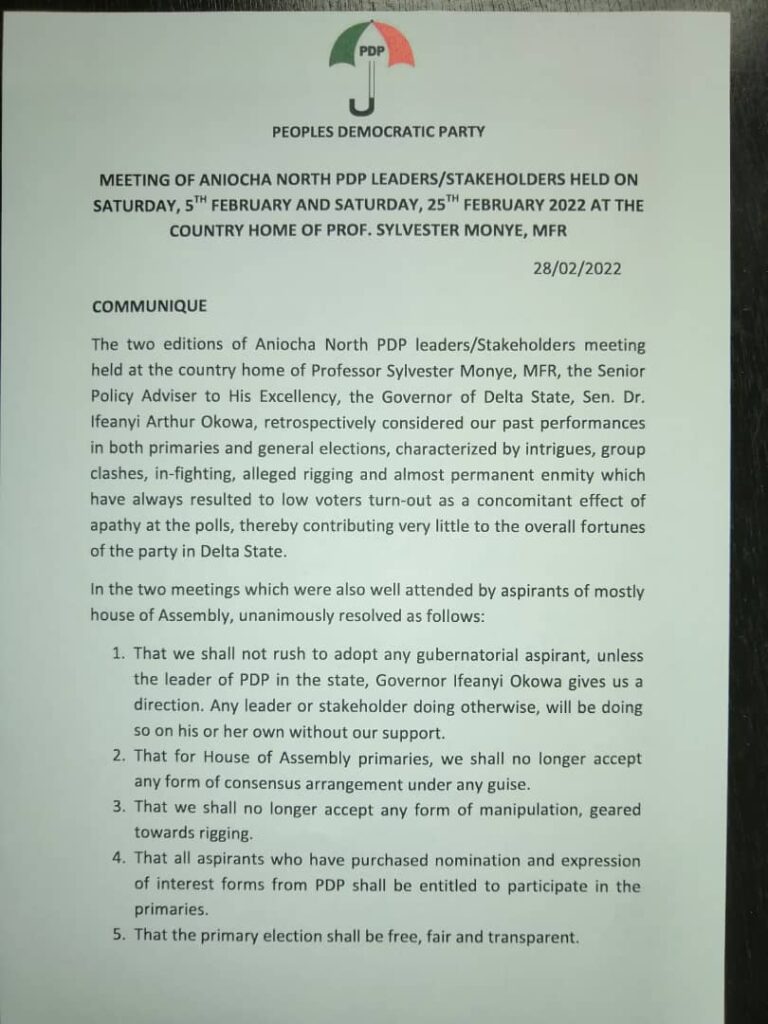 Aniocha-North: All House of Assembly aspirants to participate in primary, says leaders, stakeholders; reject consensus option; to get Okowa’s directive for guber aspirant to adopt

Leaders and stakeholders of the People Democratic Party (PDP) in Aniocha North Local Government Area of Delta State have declared that all aspirants to the House of Assembly seat of the constituency, who have bought nomination and expression of interest forms from the PDP shall be entitled to participate in the House of Assembly primary election. 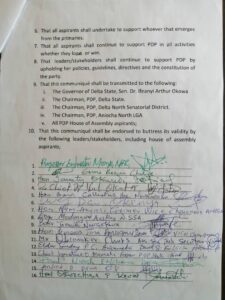 The declaration is part of a 10-point communique detailing resolutions taken at the end of two editions of meetings of Aniocha-North PDP Leaders/Stakeholders meeting held on Saturday 5th February and Saturday 25th, 2022 at the country home of Professor Sylvester Monye, MFR, and Senior Policy Adviser to Governor of Delta State.

Signed by 20 leaders who attended the meetings, among who are: Prof. Sylvester Monye, Hon. Emma Bazim Chinye, Hon. Jaunty Okwudi, Sir Chief Dr Val Okafor, Hon. Barr. Callistus I’ve Nwawolo, Chief Dan Okenyi, Hon. Adam Anyasi, Mr. Paul Nma, among numerous others, as well as no fewer than eight House of Assembly aspirants, the communique also stated that they will not rush to adopt any gubernatorial aspirant, unless Governor Ifeanyi Okowa gives them direction. They however, rejected any concensus arrangement for the House of Assembly under any guise. 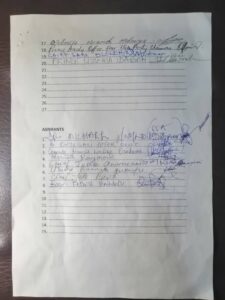 The communique states as follows:
“The two editions of Aniocha-North PDP Leaders/Stakeholders meeting held at the country home of Professor Sylvester Monye, MFR, the Senior Policy Adviser to His Excellency, the Governor of Delta State, Senator Dr. Ifeanyi Arthur Okowa retrospectively considered our past performances in both primaries and general elections, characterized by intrigues, group clashes, in-fighting, alleged rigging and almost permanent enmity which have always resulted to low voters turn-out as a concomitant effect of apathy at the polls, thereby contributing very little to the overall fortunes of the party in Delta State.

“In the two meetings, which were also well attended by aspirants of mostly House of Assembly, unanimously resolved as follows:
1. That we shall not rush to adopt any gubernatorial aspirant, unless the leader of PDP in the State, Governor Ifeanyi Okowa gives us a direction. Any leader or stakeholder doing otherwise, will be doing so on his or her own without our support.
2. That for House of Assembly primaries, we shall no longer accept any form of consensus arrangement under any guise.
3. That we shall no longer accept any form of manipulation, geared towards rigging.
4. That all aspirants who have purchased nomination and expression of interest forms from PDP shall be entitled to participate in the primaries.
5. That the primary election shall be free, fair and transparent.
6. That all aspirants shall undertake to support whoever that emerges from the primaries.
7. That all aspirants shall continue to support PDP in all activities whether they lose or win.
8. That leaders/stakeholders shall continue to support PDP by upholding her policies, guidelines, directives and the Constitution of the party.
9. That this communique shall be transmitted to the following:
i. The Governor of Delta State, Send. Dr. Ifeanyi Arthur Okowa.
ii. The Chairman, PDP, Delta State.
III. The Chairman, PDP, Delta North Senatorial District.
iv. The Chairman, PDP, Aniocha North LGA.
v. All PDP House of Assembly aspirants.
10. That this communique shall be endorsed to butress its validity by following leaders/stakeholders, including House of Assembly aspirants.