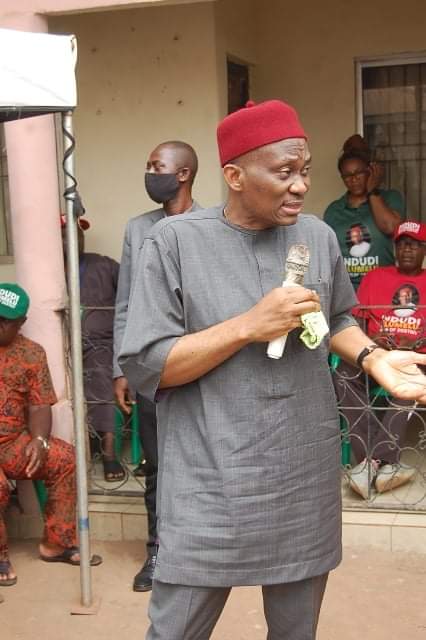 Elumelu’s endorsement was sequel to his consultation visits over the weekend to the critical stakeholders of his party, the PDP, in the four Local Government Areas of the Federal Constituency, where he formally declared his intention to re-contest for the seat in the 2023 general elections

Elumelu, who currently represents Aniocha/Oshimili Federal Constituency in the House of Representatives, was accorded a resounding reception befitting royalty, by the Party leaders and critical stakeholders in each of the Local Government Areas of Aniocha North, Oshimili South, Aniocha South and Oshimili North respectively.

Addressing the leaders of the Party, Elumelu noted that the timing of the consultative visit followed the approval of the PDP guidelines for the 2023 general election by the Party’s National Executive Committee (NEC).

“Having approved the guidelines by virtue of the Electoral Act and having so complied, it becomes very imperative and a must for us to pick up our forms. Of course, I cannot pick up the forms when you have not given me the mandate to do so. We have only between Thursday 17th and Sunday 20th to do that and that’s why I have come to consult with you in that regard.

Elumelu revealed how the Principal Secretary to the Delta State Governor single handedly purchased the Expression of Interest and Nomination Forms for him but that he decided not to pick the forms until he had received the approval of his people; a mandate which was overwhelmingly given to him in the four local government areas.

On Affirmative action, the Minority leader said that the Delta State Governor, Senator Dr. Ifeanyi Okowa has already commenced with the implementation in the State. 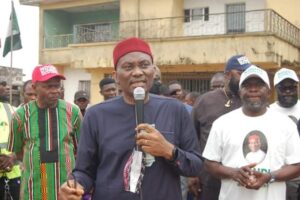 “I am happy to inform you that your son, His Excellency the humble and working Governor of our dear State has started implementing it one by one. Today, we have more women now as councilors in the local governments in Delta State and it is compulsory for a woman to be Local Government Vice Chairman in our State.

“So, I told them that in Delta State we are already practicing it, but for the purposes of making it universal, we will support the bill to scale through,” the Minority leader assured.

On who takes over from the incumbent State Governor in 2023, Elumelu pleaded with the critical stakeholders to be circumspect and united in searching for a suitable candidate who can leverage on the achievements of Governor Okowa to further lift the State forward

While commending his constituents for their continuous prayers and support for him, Elumelu affirmed that his representation, particularly his intervention in infrastructural and human capital development, has in no small measure, put the Aniocha/Oshimili in the front burner of socio-economic and political development in Nigeria.

He also affirmed that his empowerment programme for 2021 is ready and awaiting a date by Governor Okowa, who is expected to hand over the empowerment items to beneficiaries.

“The empowerment we did last year was for 2020. The 2021 empowerment is ready. We are going to march to the Cenotaph in a few days to collect our empowerment items,” he announced.

Stakeholders in the four local government areas, all applauded Elumelu’s impressive performance in the National Assembly and collectively endorsed him to contest for re-election into the House of Representatives in the forthcoming general election.

While endorsing him to re-contest under the PDP, the stakeholders appreciated Hon. Hillary Ibegbulem for helping the people of the Federal Constituency to procure the Expression of Interest and Nomination Forms for the Minority Leader.

They mandated Hon. Elumelu to, without delay, accept the forms, while assuring him of their support at every level of his aspiration