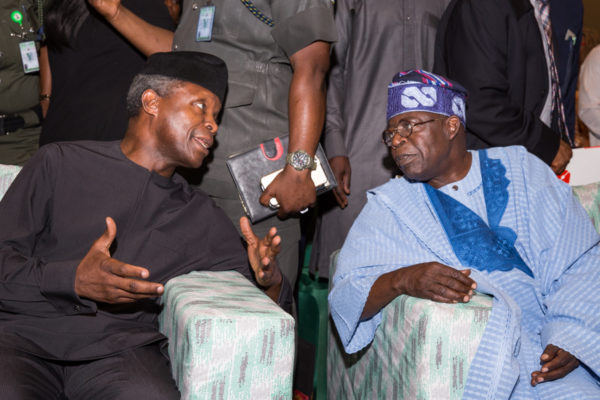 PERSPECTIVE – 2023: Should Osinbajo face off against Tinubu?

Chief_editor March 21, 2022
By Etim Etim
I have read many articles and commentaries suggesting that Vice President Yemi Osinbajo should drop his presidential ambition in deference to Asiwaju Bola Ahmed  Tinubu.
They argue that since it was Tinubu that gave Osinbajo his first political appointment as far back as 1999, an Osinbajo challenge will be tantamount to ”biting the finger that fed him”. In other words, the argument goes, since Tinubu, as Lagos governor, appointed Osinbajo Attorney General and Commissioner for Justice in 1999 and possibly  played a role in his emergence as the VP in 2015, Osinbajo owes Tinubu eternal gratitude and so should drop out of the race.
This argument is specious, deceptive and myopic. It ignores the urgency of the moment and panders to emotions and traditions. The idea is a clever and disingenuous ploy by the Tinubu campaign to discourage the VP from the race and pave the way for Tinubu as the sole APC candidate.  Nigerians deserve the benefit of choosing the next President from a wide array of candidates.  Nobody should be bullied or railroaded out of the contest; not this VP who is well placed to offer sound and competent leadership.
There are many reasons why Prof Osinbajo should ignore the taunts from the Tinubu camp, and go ahead to pursue his ambition. One, Yemi Osibanjo is the most favoured of all the presidential aspirants in both parties. Although he had served in the Tinubu administration as a commissioner, he is not under eternal servitude or peonage to the former governor. Public service is not a favour to the serving official. It is a civic duty or a sacrifice. Osinbajo served creditably well in Lagos. He is not under any bondage to Tinubu. Far from it. Rather, Asiwaju and his supporters should acknowledge Osibanjo’s status as the nation’s number two citizen and accord him the respect the office deserves.
If anybody needs to withdraw for another, I believe that it is actually the Asiwaju who should step down and encourage the VP in the race. Tinubu should be proud  that his former commissioner has continued to give a good account of himself as our Vice President, and he is a formidable contender in the presidential race.  It takes a leader to raise another leader, so states the Law of Reproduction in management science.
Two, in the last  one year or so, Nigerians from all walks of life, political inclinations and ethnic affiliations have been routing for the VP  for many reasons. His support base has been growing steadily across board. It would therefore be an unpardonable act of cowardice for the VP to chicken out of the race just to please Tinubu. Nigerians would be too disappointed in the VP.
Three, our country is in a very critical socioeconomic circumstances now;  an unusual moment that requires the best of us to step up and lead the nation. Osinbajo is a competent, committed and dedicated public servant reputed as the engine room of this administration. He can stand any way in the world, comfortable with other world leaders, business chieftains, the young and the old, on any platform, to discuss any topic. He is savvy with new technology and always ready with solutions for all problems. The VP easily connects with Nigerians and exudes compassion and empathy. He will make a great leader in times like this.
Four, Tinubu cuts a picture of a politician overwhelmed with a sense of entitlement. For him, the presidency should be handed over to him as a trophy for his achievements. His incessant reference to ”my life-long ambition” is an irritation and a clear dissonance with how modern day leaders speak.
Having ‘pocketed’ Lagos in the last 23 years, Tinubu now wants the whole country. But Nigeria is bigger than any one man, no matter how powerful he might be. Five, it is obvious that the former Lagos governor is not in the best of health. We all know the baggage he carries and the habits he indulges in. Nigeria will be a laughing stock before the rest of the world if APC puts him up as its presidential  candidate. I mean, in spite of our challenges, we are better than that.
Six, Nigeria is long used to alternating its leader between a Muslim from the North and Christian from the South. It makes for balance, stability and inclusiveness. Breaking this long tradition may dislocate our national harmony and violate our diversity. After eight years of Buhari presidency, the natural successor is a Southern Christian.
Finally, it seems that the clamour for the VP to withdraw from the race for Tinubu is embedded in the Yoruba cultural milieu in which a younger person must prostrate before an elder and lie there until he’s told to get up.  I get that. I respect our cultures and some of our rich traditions. They add colour to our lives and give us our identity as the world’s most populous black nation. But in the matter of the fate of Nigeria in the 21st century – a nation of over 200 million people with over 250 ethnic groups and a vibrant and youthful population – we cannot afford to subject our destiny to the whims of a kingmaker.
The Presidency is not a reward for anybody’s past efforts or a trophy for his earlier victories. The Office of the President is the highest position in the land and it symbolizes our pride, prestige and stature. That office should be reserved for the best of us who has never been tainted by any dirt or stain.