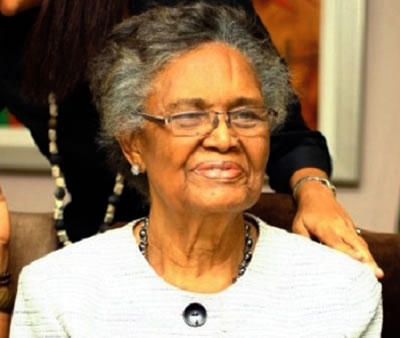 Governor Ifeanyi Okowa of Delta has condoled with the family of renowned mathematician and first female Vice-Chancellor of a Nigerian university, Prof. Grace Alele-Williams, over the passing of the scholar and administrator.

Alele-Williams passed on Friday in Lagos at 89.

In a condolence message by his Chief Press Secretary, Olisa Ifeajika, on Saturday, Okowa said that late Alele-Williams was a great role model to the female gender whom she inspired with her brilliance and diligence.

The governor joined family members, the academia and the Itsekiri nation in mourning the renowned scholar who, in 1963, earned a doctoral degree and became the first Nigerian female to attain such academic height.

“On behalf of the government and people of Delta, I condole with the deceased’s family, the academia and the Itsekiri nation and all Deltans on the passing of the renowned mathematician and scholar, Professor Grace Alele-Williams.

“We received the news of her passing with shock, but thanked God that she lived a life of great impact.

“She was a great role model and worked assiduously to stamp out cultism at the University of Benin where she was Vice-Chancellor,” he said.

Okowa noted that the late scholar’s drive and love for knowledge earned her many recognitions and awards in Nigeria and across the globe.

“Prof. Alele-Williams was an illustrious daughter of the state, and only recently, we honoured her and other illustrious Deltans during the state’s 30th anniversary celebration.

“She would be greatly missed by those whose lives she impacted and inspired in very many ways,” the governor stated.

He prayed for the repose of the soul of the departed professor, and for God to comfort her family.