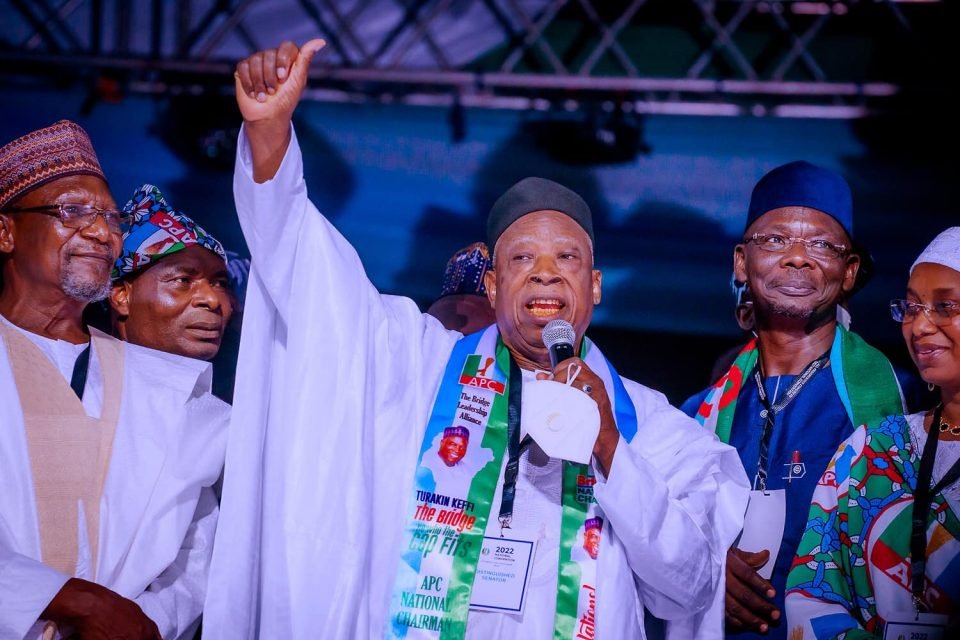 It was a symbolism. As the ruling  All Progressives Congress, APC, led by contented men and women in rich flowing robes, with siren blasting, gathered to disturb the peace of a troubled Abuja, bandits were staging a raid at the Kaduna Airport, a two-hour drive away.

The APC chieftains were gathered for their convention where they noisily celebrated seven years of gross under-performance, furiously driving the country to the precipice, and the coronation of a new puppet party leadership which will take orders from one man.

The party has learned well from its surrogate mother, the Peoples Democratic Party, PDP, which, despite its 16 years of underachievement, never brought down the country to this level of anarchism, recklessness, mass hunger and want with so much insecurity that an airport in a city with almost all our military institutions, will be attacked multiple times by bandits.

Now, the revellers have gone, party chieftains have returned to their bunkers guarded by armed agents, the lower rungs who invaded Abuja by road have gone back hoping their journey was worth the investment, while the rest of us battle forces of banditry, lack of petrol, very high cost of diesel and increased prices of energy married with the supply of darkness.

In all these underdevelopment indices, one group that has gone professional are the thugs who in the First Republic were rough necks. They became so dominant that a leading politician told the electorate that even if they don’t vote for his party, ‘Angels’ would.

By the Second Republic, the thugs started wearing lace and caftan. Since the return to civil rule in 1999, the chief thugs have gone corporate; wearing designer clothes, acting like rock stars, seen with beautiful ladies and announcing their holidays abroad.

Where in the two past republics, the thug was always on the lookout for the police, now he has armed police escorts. While in the past, the thug snatched ballot boxes or thumb printed ballot papers, today, the influential thug writes results which are either announced by the returning officer, or validated by the courts.

In the early 1970s, Wahab Omorilewa Goodluck, a highly perceptive and visionary labour leader having studied the country’s political trajectory, wrote off the political and ruling military class. He announced that since the politicians and the military had failed, it was the historic duty of workers to run the country.

The Generals, led by then Head of State Yakubu Gowon, were so angry that they seized Goodluck who was the President of the Nigeria Trade Union Congress, NTUC, and the Congress scribe, Samuel Udoh Bassey, put them in a security train and dumped them in the Kaduna Prison.

After a four-year absence, the military in 1983 returned on a vengeful mission to punish and pulverise the politicians. They then engineered a convoluted political system built on an endless transition programme, greed, covetousness and impunity. The perceptive lawyer, Chief Gani Fawehnmi, warned the country that the military regime is infected with the Acquired Immune Deficiency Syndrome, AIDS, and was therefore incapable of giving birth to an AIDS-free civilian dispensation.

The civilian rule which was introduced in 1999 was built on these military foundations, and most leaders that emerged to run government were either Generals or their beneficiaries. This also accounts for the military command structure, lack of democracy, accountability and the rule of impunity that characterises the APC and PDP.

The electorate has been rendered so impotent that their votes do not matter; since votes cannot change government, it is quite constitutional for the politicians to dissolve the electorate and elect another.

As Comrade Goodluck argued 50 years ago, the country cannot be saved by either politicians or soldiers, but by a conscientious mass movement led by workers and those who labour. These are the primary victims of the barbarism that has been visited on the country; they make the wheels turn and lubricate the public service. They are the teachers and bricklayers, the factory workers, labourers and farmers forced out by bandits.

The analysis of Goodluck was that this group of people are united by common interests and goals and that unlike the politicians and the military, they are not ruled by primordial sentiments, and have traditionally built Pan-Nigerian and even Pan-African movements based on the need to provide the basics of food, clothing, shelter, work, education and healthcare for all.

The leadership of the Trade Union Congress of Nigeria, TUC, led by the perceptive Comrade Quadri Olaleye has reached the conclusion that to rescue the country, the children and grandchildren of Wahab Goodluck and Michael Imoudu in the Labour Movement must harken to the voices of their forebears.

After a series of consultations, the TUC on March 10, 2022 in Abuja, convened a Political Roundtable on Sustainable Democracy in Nigeria. From its original objectives of examining the role of organised Labour in promoting Participatory Democracy and Good Governance towards the 2023 Elections, the TUC changed to a three-stage rescue of the country.

It came to the painful realisation that the political leaders who are likely to emerge in next year’s elections would be transactional not transformational; the economy is likely to further degenerate, and that unless they are in control of political power, workers cannot change the economy for their benefit and that of the poor who constitute the mass of the people. But the TUC is quite convinced that it can, in concert with the rest of the Labour Movement, mobilise the collective power of workers and their allies to change the course of the country towards developmental paths.

Comrade Olaleye explained to workers that the reason for incessant labour unrest, mass unemployment, fuel scarcity, hunger and a dysfunctional society is principally because Labour is not involved in the power equation. He told them thus: “ The principles of democracy has not changed: it is about numbers and we have it.”

So what needs to be done? For this, Comrade Olaleye told workers a Chinese proverb that says: “The best time to plant a tree was 20 years ago; the next best time is now.”

In other words, if workers and their allies want to change their circumstances and rescue the country from beneficiaries of military misrule and the reckless tribe of politicians, the best time to act is now.

So the TUC is working on an immediate Charter of Workers Demands with which it can negotiate with political parties and which in the medium term, it would popularise across the country. Its long term objective is to get the workers to build their political party and take power in the post-2023 elections. This will be an alternative to giving room to the politicians to dissolve the electorate.