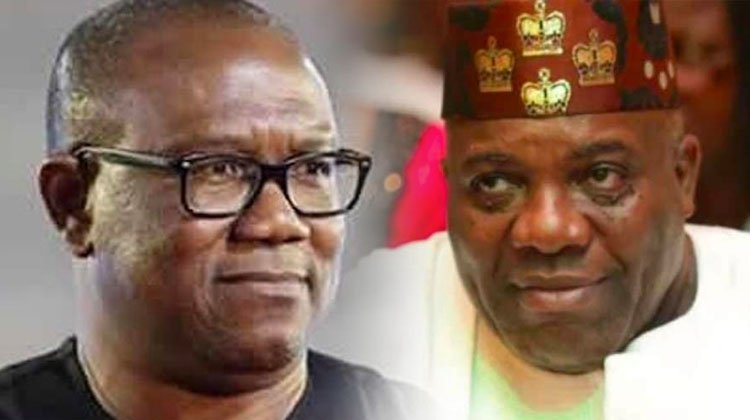 A former presidential aide, Doyin Okupe, and presidential hopeful has withdrawn from the 2023 race to support the ambition of ex-governor of Anambra State, Peter Obi.

He made this known today, Wednesday, at a press conference held at the Iwe Iroyin Press Centre in Abeokuta, the Ogun State capital, saying that leader of socio-political group, Aferenire, Chief Ayo Adebanjo, appealed to him to withdraw from the race.

Okupe also enjoined all other Peoples Democratic Party aspirants from the South including Dele Momodu, Pius Anyim, and Nyesom Wike to team up with Obi, who is from the South-East geopolitical zone.

Okupe also accused the PDP leadership of driving presidential aspirants to “fait accompli”, saying “those at the helm of affairs of the party are trying to hoodwink those of us aspirants from the South to commit ourselves to obtain the requisite forms before coming up with the original position that ‘every zone can contest the presidency’

“This position is politically fraudulent, unjust and inequitable.”

The ex-presidential aide to former Presidents Olusegun Obasanjo and Goodluck Jonathan said he had consulted far and wide with the political stakeholders in the South and decided that power be zoned to the South-East in the spirit of fairness.

Okupe, who turned 70 recently, said, “Two weeks ago, Pa Ayo Adebanjo called me for the first time into his bedroom and admonished me that no matter what circumstances we Yorubas find ourselves in the ever gyrating political circus of Nigeria, I must uphold the truth and follow the path of equity and justice.”

Continuing, Okupe said, “In aligning myself with the wish of our elders and in the interest of equity and justice, I publicly admit that the 2023 political race must be conceded to the South-East; that is, the Igbos.

“I, therefore, here and now proclaim that I am, as I have said publicly several times, withdrawing from the presidential race and I am declaring my support for the best aspirant not only in Igboland, but in Nigeria as a whole.

“I and my supporters within and outside the PDP are teaming up with His Excellency, Peter Obi.

“At the same time, I want to enjoin all other aspirants from the South; Chief Dele Momodu, Senator Anyim, and His Excellency, Governor Nyesom Wike to come with me and let us team up with Peter Obi. So we can give the South the best possible chance.

“For the avoidance of doubt, I am not fanning the embers of division, rather I am by this action lightening the torch of unity by establishing political stability on the pillars of truth and justice upon which the Bible tells us that even the throne of the Almighty God is founded.”

There has been clamour from many quarters that power be zoned to the South-East in 2023.

by throwing their hats in the ring for the 2023 election despite the gentleman’s agreement subsisting in the party.

Politicians and members of the PDP from the north who have declared interest in the 2023 Presidency include ex-Vice President Atiku Abubakar; ex-Senate President, Bukola Saraki; Sokoto State Governor, Aminu Tambuwal; and Bauchi State Governor, Bala Mohammed.

The PDP National Chairman, Iyorchia Ayu, had also said that the party won’t abandon its tradition of zoning political offices in the 2023 elections.

The 17 Southern governors including Wike as well as sociopolitical groups such as Ohanaeze Ndigbo and Afenifere have consistently maintained that political parties should zone their presidential tickets to the South for a candidate to replace the President, Major General Muhammadu Buhari (retd.), who is from Katsina State, in the North-West and whose two-term would end in May 2023.

Other presidential hopefuls from the South include All Progressives Congress leader, Bola Tinubu; Governor of Ebonyi State, Dave Umahi; ex-Governor of Imo State, Rochas Okorocha; former Governor of Abia State and Majority Whip of the Senate, Senator Orji Kalu; former Deputy Governor of the Central Bank of Nigeria, Kingsley Moghalu, among others.

Vice-President Yemi Osinbajo has also been rumoured to nurse an ambition to succeed his boss through the 2023 election but the professor of law has not officially made his intention known.