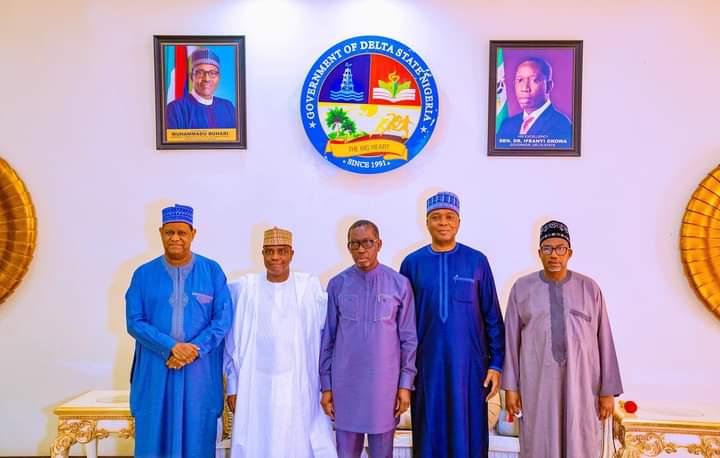 Former President of the Senate, Dr. Bukola Saraki, said all Peoples Democratic Party (PDP) presidential hopefuls from the North were working for a consensus candidate to foster desired unity in the country.

Saraki disclosed this in Asaba on Monday when he led other aspirants, including Governor Aminu Tambuwal of Sokoto State, Bala Mohammed of Bauchi State and former Managing Director of FSB International Bank Plc, Alhaji Mohammad Hayatu-Deen, on a consultative visit to Governor Ifeanyi Okowa at Government House, Asaba.

He said that Nigeria was in dire need of competent leaders to reverse the country’s slide into poverty, insecurity and anarchy.

He stated that Nigeria was the largest economy in Africa under the PDP, but regretted that the country was now the poverty and kidnapping capital of the world under the All Progressives Congress (APC)-led Federal Government.

He called on stakeholders of the party to support consensus arrangement to ensure that the party remained united and able to rescue the country from maladministration.

According to Saraki, we are here, the four of us, to discuss with Governor Ifeanyi Okowa on how to build consensus for our party ahead of the presidential election.

“We had a very useful discussion with the governor; we have decided to come as four of us who are aspiring to be president on the PDP platform.

“Your Excellency, you know your reputation for the PDP and the country is always first in your mind and ever since, when there is assignment that has to do with ensuring unity of the party you have always been called upon.

“That’s why we are here to meet with you and share with you what we have been trying to do.

“The four of us have been meeting and we came up with this idea that in the interest of the party, that we should come together and look at a consensus arrangement.

“This is important because we believe that the country needs unity. We are all eminently qualified to lead this country but we believe that only one person will lead and that person needs everybody to make Nigeria better and to fix this country,” he said.

Saraki, also a former governor of Kwara, stated that the interest of the aspirants was second to that of the country, adding that “as somebody who has always shown that as well, we have come here today as our first visit to the southern part of the country.

“This also goes to show that this consensus arrangement is not just about the issue of the North but about Nigeria and to carry you along on what we intend to do.

“We have shared our thoughts with you and you have also shared your ideas with us on what we need to do and we can assure you that we are committed to this consensus process.

“This consensus is needed so that at the end of the day, PDP will be united to provide leadership for this country because the way the country is today, we need to fix it, we need to tackle the issue of insecurity and unemployment.”

Responding, Okowa thanked the visitors for coming to intimate him on their plans, and said that consensus candidacy was indeed in the best interest of the unity of the party and the country.

He underscored the importance of building consensus to solve the current challenges bedeviling the nation.

“I truly want to welcome you to Delta state. I have listened to you and the fact that you have started to meet together to think of the best way possible for us to get out of the very difficult situation we have found ourselves as a country, is very heart-warming.

“I thank you for putting yourselves together to educate the rest of us from across various states on the need for us to build a consensus.

“I believe that it will reduce acrimony and help to position us as a party in order to help to compete favourably and win the 2023 elections.

“There’s no doubt that God has favoured us and placed us in a good position to be able to win the elections but we need to also take some human actions that will enable us give strength to ourselves.

“This action that four of you have taken today is actually a step in the right direction. It will strengthen us and pull us together.

“It is my prayer that God will help you achieve this consensus that you seek to build because in that consensus, we will be united as a party, which will give a lot of hope to Nigerians, that truly, PDP is working the talk.

“So I truly want to appreciate you for this visit and urge that you work hard towards the building of this consensus and that of the party too.

“I think that this is the kind of thing that we need at the moment and as you take this step forward, may God give you the strength to be able to engage the rest of our brothers across this nation.

“We hope that at the end, we would be in a place to say yes, we have really strengthened the PDP and that we are in a better position than other political parties to compete,” Okowa State.