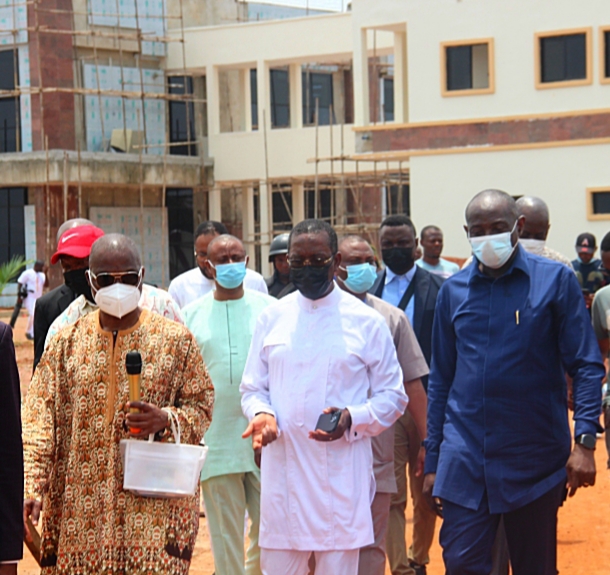 Delta Governor, Senator Ifeanyi Okowa, has said that the Advanced Diagnostic Medical Centre and the Mother and Child Hospital in Owa-Alero, would be ready for inauguration at the end of April, 2022.

Okowa disclosed this at the weekend while fielding questions from journalists shortly after inspecting the twin medical facilities being executed by the state government.

He said that completion of the facilities would be attained at record time, disclosing that all the equipment needed for the medical facilities had been delivered.

While lauding the contractors handling the project for quality job at the two sites, the governor said “what is on ground now is a good sight to behold”.

According to him, the construction work is something everyone will appreciate, and the environment itself is very welcoming.

He said “we are hoping that at the end of this month we should be through. All the equipment needed are on ground.

“For the infrastructure itself, we are at the stage of completion; we don’t want to pull them too fast but l would have wished that they were ready at the time the equipment came.

“Obviously, that is a drag down but we can see that the quality of work is good and it is for us to be very hopeful that in another two weeks, we should be fairly ready.

“So that those installing the various equipment can actually fully come on site because for some of those equipment, until everything is set, they cannot truly be installed.

“They have to stay in the containers that they were brought in but l am glad that the equipment are on ground.

“Possibly, the contractor did not believe that the equipment will be on ground but the equipment are fully on ground and they are state-of-the-art equipment both for the Advanced Diagnostic Medical Centre and the Mother and Child Hospital.

“It is a good sight to behold. The construction work is something you will appreciate and even the environment itself is very welcoming.

“I think it is a planned work. They may have had some delay but the work is very good.”