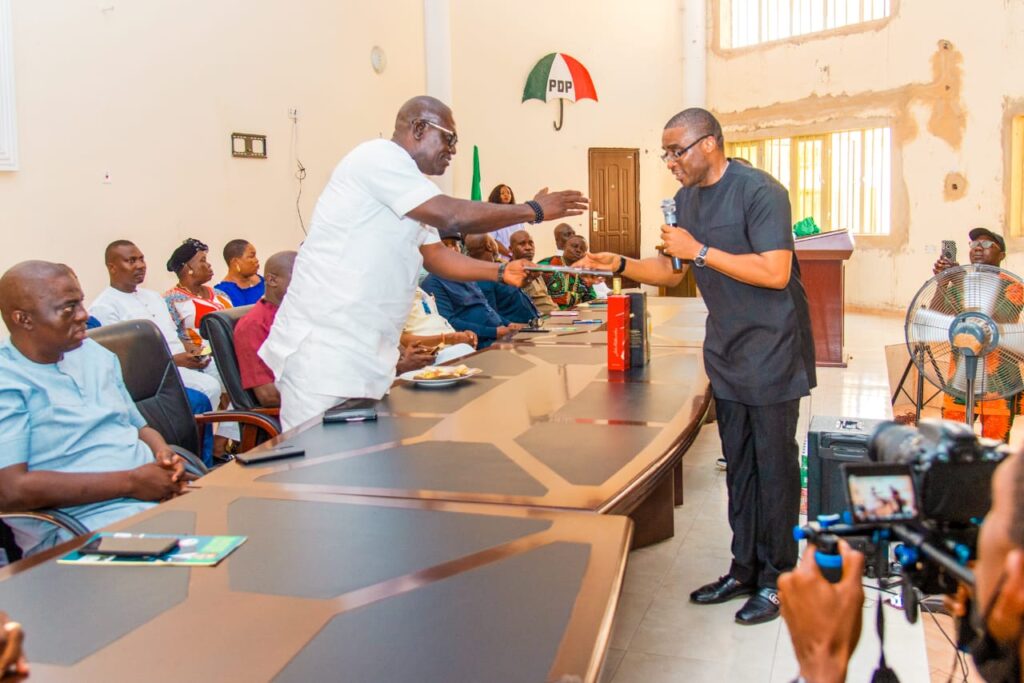 The Chairman of the Delta State chapter of the Peoples Democratic Party, Olorogun Kingsley Esiso has said the party is excited about the vision and development plans of its frontline Governorship aspirant, Olorogun David Edevbie.

Esiso made the disclosure in Asaba on Monday afternoon at the PDP Secretariat when Edevbie visited the party’s State Executive Committee and working to officially declare his intention to contest for the ticket of the party for the 2023 Governorship election.

Edevbie received a standing ovation from both members of the State Working Committee and members of the party present after he stated his vision and development plans for the state, which includes improved power supply, combating insecurity, industrialisation, jobs and wealth creation, integrated social infrastructure development, integration of the riverine communities and upgrade of state institutions to be driven by information and digital technology, all geared towards creating a vibrant and robust economy for the benefit of Deltans.

Reacting to Edevbie’s presentation of his vision, the state party chairman said he was excited at Edevbie’s modernisation agenda and relates perfectly well with its feasibility as exactly what is needed in building a developed society.

“I am excited with Olorogun David Edevbie’s vision for the modernisation of the state and I want to thank him for coming up with the ideas,” Esiso said.

“As a student of development, I am always happy to see ideas and plans like this because that is what we need for the development of our society. We need modernisation.”

The endorsement of Edevbie’s capacity to lead was first made by Chief Patrick Fovie, Chairman of Delta Central PDP who welcomed him to the event.

According to Fovie, Edevbie’s capacity is outstanding and he is someone any society can proudly send forward to act for it.

“Edevbie has all it takes to lead Delta to greater heights. We therefore pray God to keep him in good health and grant him success to emerge as the Governor of the state because we know he will make Delta State greater than he will meet it.”

Director General of David Edevbie Campaign Organisation, Chief Clement Ufuani, who officially presented him to the State Executives and Working Committee held the audience spell bound when he reeled out Edevbie’s achievements in contribution to the development of the state and his pan-Delta disposition.

“When Olorogun David Edevbie was brought from an overseas corporation where he controlled hundreds of millions of pounds under his portfolio but when he arrived and was made Commissioner for Finance and Economic Planning in 1999, the state budget was a paltry N6.3b. The subvention of the Ministry of Education, to take care of all the primary, secondary and tertiary institutions, for instance, was just N500,000. There was virtually nothing the state could achieve with that amount. But Edevbie was not discouraged.

“He got down to work, and by 2003 he had increased the state income from N6.3b to N60.2bn. That was how Chief James Ibori was able to achieve some of the development projects for which he is loved and hailed across various communities in Delta State.

“It is no surprise that subsequent administrations of Delta State always called him back to serve again as their Commissioner of Finance. It is also no surprise that he was appointed Principal Secretary to late President Umaru Yar’adua at the national level, a position by which he virtually administered the whole nation at that point in our history. I testify because I was by his ringside.

“He is extremely detribalised and pan-Deltan. He appointed me his Special Assistant without our knowing each other before. He simply based his judgement on my credentials. He further supported me to be appointed Commissioner for Economic Planning which split his ministry into two. He also recommended me for appointed as Special Adviser to the President. Yet he is from Afiesere in Ughelli and I am from Ubulu-Okiti in Anioma. His second Special Assistant when he was first made commisioner, Charles Nenyiaba, was also from Agbor. That is David Edevbie for you. He is not interested in where you come from or what language you speak. He believes in capacity to deliver on set goals and objectives for the development of the state. He is the kind of person of person our Delta needs at this time to navigate the state through the emerging global and national economic challenges.”