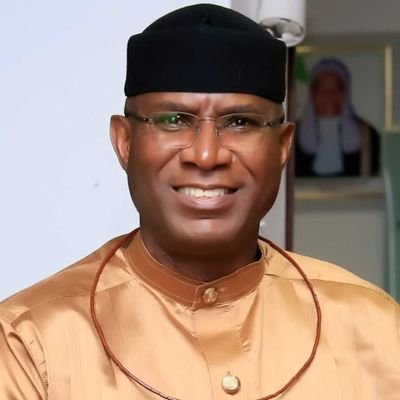 2023: Omo-Agege throws hat in the ring for Delta Guber contest

The Deputy President of the Senate, Ovie Omo-Agege, has officially declared to contest the 2023 governorship election in Delta State on the platform of the All Progressives Congress (APC).

This is even as the ruling APC has vowed to end the 24 years rule of the Peoples Democratic Party (PDP) in the state.

Omo-Agege made his intention known at a declaration rally held at the Federal University of Petroleum Resources (FUPRE), Effurun, Delta State.

The lawmaker, who said he has “the edge to build a new Delta”, boasted that he has fulfilled all his electioneering campaign promises he made to the people of Delta Central in 2019 general elections.

Counting his achievements as a lawmaker, Omo-Agege said he has attracted solar street light to every community in Delta Central as well as renovation of primary and secondary schools across the district.

He added that he has also built ICT centres in schools in the district and facilitated the Federal Polytechnic and establishment of a campus of the Nigeria Law School to the state.

He, however, disclosed that the Federal Government of President Muhammadu Buhari through his efforts and that of the Senator representing Delta North, Senator Peter Nwaoboshi has approved the establishment of a new Federal University of Agriculture at Aboh in Ndokwa East of the state.

Lamenting that Deltans are suffering under the PDP regime of Governor Ifeanyi Okowa, the Delta Central senator accused the governor of specifically marginalising the people of Ndokwa Nation, Isoko Nation, Itsekiri Nation and Ijaw Nation despite their huge contribution to revenue of the state.

“If we all fold our hands and allow Okowa and co to continue, they will continue to marginalise us. If you go to Delta North today, the Ndokwa Nation made up of Ukwuani, Ndokwa West and Ndokwa East, they contribute so much to the economy of this country but if you go to Ndokwa Nation today, there’s nothing ground.

“Okowa has continued to marginalise the people of Ndokwa Nation. We can’t allow that to continue. If you go to Aniocha and Oshimili areas, there’s no presence of Okowa’s government there. The time has come when you need to take your destiny in your hand and say, enough is enough.

“If you go to Delta South, the Isoko Nation contribute so much to the economy of this state and this country like our Ndokwa brothers, but if you go there, there’s nothing. All you have there is a state polytechnic that was recently upgraded to university just on paper. It’s on paper only. It’s a glorified secondary school. Is that fair? Enough is enough”, Omo-Agege stated.

Omo-Agege, while further accusing the Governor Okowa-led administration of spending N2 billion every month on political appointees, lamented the failure of the PDP government to pay pensioners their retirement entitlement.

According to him, “our parents who gave best parts of their lives in the service of this state; some of them have retired in eight-nine-ten years, up to today, they have not been paid their retirement benefits. Meanwhile, Okowa is busy employing political aides.

“Okowa spends N2 billion every month on these people who do not contribute anything to governance. But our youths who need gainful employment, they will not give them jobs. Enough is enough.

“Therefore, today, the 14th of April, 2022, I, Senator Ovie Omo-Agege, Obarisi of Urhoboland, offer myself as a candidate for the Office of Governor in Delta State in 2023 on the platform of our great party – All Progressives Congress (APC).”

Meanwhile, speaking at the declaration rally, Governors Yahaya Bello (Kogi) and Hope Uzodinma (Imo) asked Governor Ifeanyi Okowa-led PDP Government to prepare to handover to Senator Omo-Agege as the next governor of Delta in 2023.

Taking turns to address the mammoth crowd of APC supporters, Governor Bello of Kogi State charged the people of Delta to vote Senator Omo-Agege, saying he had been tested at the federal level and would make a good governor.

Governor Bello, represented by his Deputy, Chief Edward Onoja, said Delta is lucky to have Omo-Agege as their next governor, adding that Delta Central senator will develop the state and ensure gainful employment for the youths.

“In 2015, Deltans made ordinary Senator to be governor but in 2023 Deltans will elect a Deputy Senate President as their governor. Omo-Agege is not a small name in this country. Governor Yahaya Bello asked me to tell the people of Delta State to vote Omo-Agege as their next governor in 2023”, Kogi governor said.

Also, Governor Uzodinma in his remark, advised the people of Delta not to miss the golden opportunity of a ‘New Delta’ which Senator Omo-Agege is offering by voting out PDP in 2023.

Uzodinma, represented by his Deputy, Prof. Placid Njoku, boasted that he would join Senator Omo-Agege and the APC to mobilise Deltans to chase away the ruling PDP in the state from power.

Deltans Have Been Suffering Under PDP Since 1999 – Emerhor

On his part, Delta APC founding leader and former governorship candidate of the party in 2015, Olorogun O’tega Emerhor; said the people of Delta have been suffering since 1999 when PDP took over the governance of the state.

He, however, said the end of the suffering has come, adding that Omo-Agege will liberate Delta from the grip of PDP.

“Since 1999, Delta State has been suffering. Some of us came in since 2013 to try and rescue this state. We have been trying for 10 years now. But now, we have a liberator in Senator Ovie Omo-Agege who has come to rescue Delta.

“Are you seeing the mammoth crowd? Delta is ready to be rescued. Delta suffering has ended. God has brought to us someone to rescue us. Omo-Agege has the capacity to do the job of building a better Delta from 2023”, Emerhor echoed.

Chief Ayiri said APC is battle-ready to ensure that Senator Omo-Agege succeed Governor Okowa in 2023 and called on Deltans particularly Itsekiri to vote for APC.

Ijaw Are Ready To Wait For 2031 Governorship Seat – Micheal Johnny

Meanwhile, an Ijaw APC chieftain in Delta, Chief Micheal Johnny has faulted “2023 Ijaw Governorship Agenda”, stressing that Ijaw have agreed to allow Delta Central to produce the next governor of Delta in 2023.

Chief Johnny, who hails from Gbaramatu in Warri South West, posited that Ijaw of Delta have also agreed to wait till 2031 after Delta Central to produce a governor.

He urged the people of the state particularly Delta Ijaw to vote for Senator Omo-Agege, assuring that APC government will bring massive development to Ijaw communities in the state.