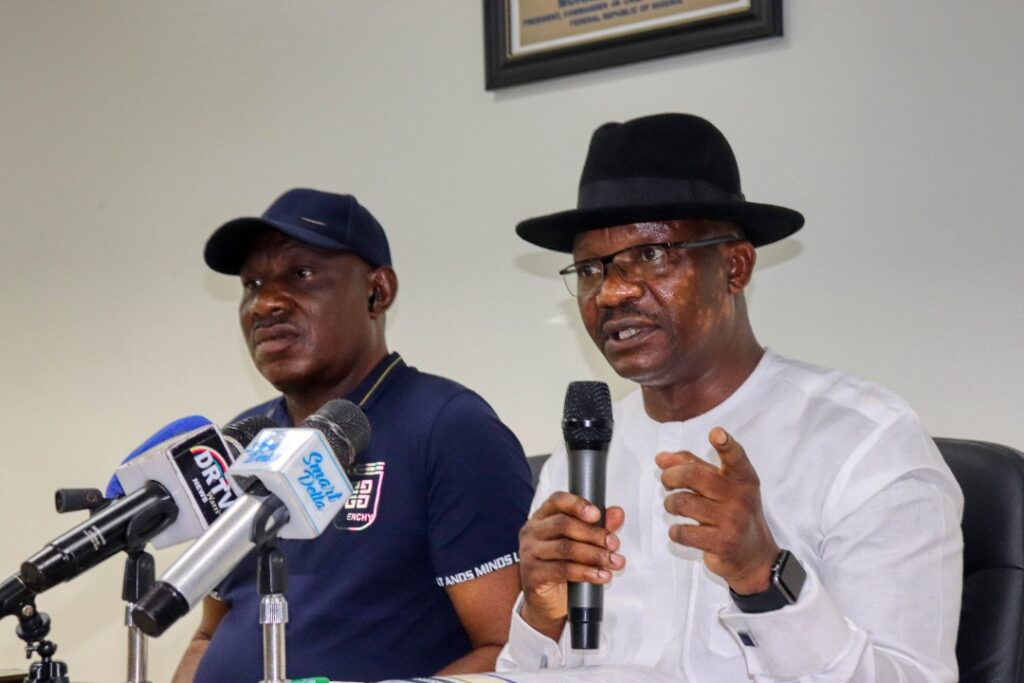 Delta Government on Friday lashed out at Deputy President of the Senate, Senator Ovie Omo-Agege over his governorship declaration speech, describing it as empty and uninspiring.

The government said Omo-Agege failed to tell Deltans and Nigerians what he intend to do differently despite having the programme on live television coverage.

At a news conference in Asaba, the State Commissioner for Information, Mr Charles Aniagwu told journalists that the emptiness of Omo-Agege’s declaration speech shows that he lacked the capacity to govern a state like Delta.

He said that Delta was made up of men and women of integrity and wondered why a man who occupies a sensitive position as Deputy President of the Senate would organise such a declaration programme without clear cut plans on how he intends to govern the state if given the opportunity.

According to him, we were surprised that somebody at that level can organise a declaration which we do not hold against him because it is his democratic right but that he does so, so emptyly is our concern.

“It is important that we advice him to up the ante and not to make members of the general public who are not Deltans to think that our level of understanding of issues is waning.

“We remain number one in the country and that is why we say ‘Delta nor dey carry last’ and we do not want somebody that is supposed to occupy a very responsible position to lower that very enviable position that our state have occupied in the scheme of things either politically or otherwise.”

Aniagwu who was flanked by the Chief Press Secretary to the Governor, Olisa Ifeajika, slammed Omo-Agege for what he described as lack of discipline for time.

“Yesterday, in the course of his declaration he displayed a very high level of indiscipline because he told the people he was going to start that event at 10am but he did not show up until 3pm which means he does not even have respect for time.

“He didn’t even know that time between 10am and 3pm is very important to those persons he had gathered and they would have used that time to also engage in other very productive ventures.

“The man who is aspiring to lead our state cannot display that level of indiscipline in the first instance.

“We are also shocked that on a live broadcast which he had paid a reasonable amount of money, for the purpose of showcasing himself and if on a live programme he cannot even tell the people what he wants to do to govern our state, you can understand why we are disappointed at that emptiness,” the Commissioner stated.

The Information Commissioner described Omo-Agege’s attacks on the Okowa administration and the PDP as petty and an indication that the Delta Central Senator was being economical with the truth for political reasons.

He stated that Okowa has done his best developing all parts of the state in the last seven years and urged the Senator to come home often to be abreast with projects executed by the PDP led administration in the state.

“First and foremost, Senator Dr Ifeanyi Arthur Okowa is not on the ballot for the governorship election of Delta State ahead of 2023 because he is about to finish his second term in office which the Constitution allows him.

“And so anybody saying we are going to chase him out of office when the man is already preparing to leave the office means that the man does not actually understand the situation of things.

“This is not a time to say you want to chase out a man who is not contesting with you. If you must chase, you must run after those that you are in the same race with because to the best of our knowledge, Senator Dr Ifeanyi Okowa is not running the same race with Senator Ovie Omo-Agege.

“A man cannot be in a boxing ring preparing to knock out his opponent and then you who is in a tennis court is now preparing to win him. It is not the same game and that also further underlines the emptiness of that declaration.”

Aniagwu stressed that Omo-Agege displayed crass ignorance on developments in the state noting that the three senatorial districts had received reasonable attention in terms of infrastructure and human capital development.

“But another fact that underlines the emptiness of that declaration is the fact that our dear brother who is occupying a very exalted position, is not even aware of the level of development that characterised these senatorial districts in the last seven years.

“Outlining a few of the ignorance displayed at a very high level, he did mentioned that our dear brothers in Ndokwa nation have been marginalised and have not benefited from the Okowa administration.

“We would need to remind him that he needs to visit Obiaruku and see what is going on with the Obiaruku bridge and the internal roads constructed there as well as the Technical College built by the Okowa administration.

“We need to also tell him that before we came on board, our people from Ndokwa West to Ndokwa East were making use of Pontoon to convey vehicles across but let him go and see what is happening at the Kwale-Beneku bridge.

“We need to also remind him that Eziokpor bridge is ongoing, our people in Nsukwa axis, to Ejeme-Aniogor, Ndemili to Umutu, have very good roads because we have been able to link up our brothers in Ndokwa West and their kits and kins in Ukwuani Local Government Area.

“We are not talking about the human capital development that cuts across the 270 wards in the state which the wards in Ndokwa nation are also very inclusive.

He said the people of Isoko nation in Delta South can also attest to the infrastructural development in the area adding that the administration in the first one hundred days in 2015 inaugurated the first road project in the area.

“Let’s take him to the Isoko nation, our very dear brothers that have been very supportive of this administration.

“In our first 100 days in office, the first road project we inaugurated as an administration is the Ibrahim Kefas Road in Oleh linking up to the Oleh campus of the Delta State University.

“Needn’t we remind him that the University of Science and Technology Ozoro is in Isoko nation and infrastructure is growing up in that institution at a very fast pace even when the school before now boasts of a world standard stadium and indeed a number of other facilities that a lot of universities in this country cannot boast of.

“We don’t also need to remind him about the Isoko ring Road which traverses from Ellu, Ovrode, Ofagbe, Orie, Okpe-Isoko, Uro and terminates at Ada-Irri and our people in Isoko land sees these roads.

“The dual carriage road that we are completing from Asaba to Ughelli transverse the length and breath of the Isoko nation.

“We Needn’t also remind him that so much has been done including the completion of the law faculty in Oleh campus and of course the accreditation of five departments in the Faculty of Engineering,”

He said Omo-Agege’s only major achievement, is the erection of a signboard for the proposed Federal Polytechnic Orogun without any foundation or block work, adding that the Okowa administration had constructed Aragba-Orogun township roads as well as internal roads spanning four streets in Orogun Town where he hails from.

“Not far from there’s the Agbarho-Orherhe bridge in the same Ughelli North and the Oha-Orerokpe bridge in Okpe Local Government area so if he is not aware of all these projects it goes to show that he doesn’t even visit home.

“The peace, the harmony that we enjoy today is on account of the inclusive nature of Senator Okowa administration including the spread of projects, so if he is not aware then you can imagine the kind of administration he wants to foist on our people.

“We have thought that the cluelessness that exists at their party at the national level may be restricted to that level but for him to want to cascade it to our dear state is something that we will not keep quiet and allow our people to swallow because what happened to Nigeria in 2015 that has brought us to where we are today is not something we can dream of let alone even see in Delta.

“We wish him well in his endeavour to want to become a governor but if he must become let him up the ante because our people are very much informed and exposed.

“When next he speaks he should learn to avoid taking on a man who has left his footprints in the sands of time across the 270 wards in Delta because that is to say the least a display of the lack of knowledge of happenings in our dear state.

“We wish him well, we respect him as a leader, we recognise that democratically he reserves the right to contest but in doing so he must realise that Delta deserves the best and not for him to lower the ante,” Aniagwu stated.