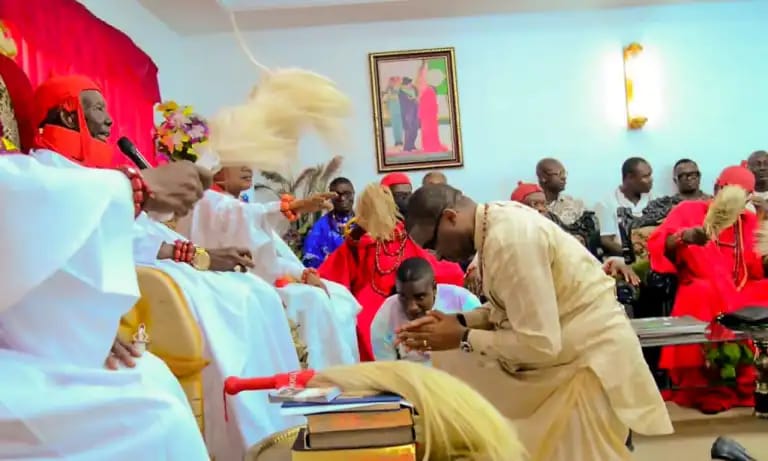 We have read with consternation the public statements by Delta Central PDP Executives and Local Government Council Chairmen appealing to the leadership of Urhobo Progress Union (UPU) to rescind their choice of Olorogun David Edevbie as the Urhobo consensus PDP candidate.

The decision of the UPU derived from its scrutiny of Urhobo aspirants at an interactive session in the month of March in which Rt Hon Sheriff Oborevwori and Olorogun David Edevbie participated.

Before the engagement, the UPU made it clear to the aspirants that given the current uncertainties in Delta political climate, especially the seeming repudiation of the rotation of power on district basis which also seems to be calculated to undermine the interest of the Urhobo nation to produce the next Governor, it was necessary for the Urhobo nation to not only present a common front to ensure that they do not enter the primaries divided, but also to present a candidate with the best capacity and exposure to perform on the job for the good of all Deltans.

It is not the first time that the UPU is carrying out such an exercise. In 2014, they did the same thing from which same Edevbie was adjudged the best from a field of contenders which included the sitting Deputy Governor and SAN of long years standing, Prof Amos Utuama, the current Deputy Senate President, Obarisi Ovie Omo-Agege, Olorogun Kenneth Gbagi and others.

Indeed, this time around, it was even Governor Ifeanyi Okowa who advised the UPU, at their 90th anniversary celebration last year, to prune down the number of aspirants from Delta Central.

For the avoidance of doubt, this was well reported in the New Telegraph and other newspapers on December 5, 2021 as follows:

“Governor Okowa, who spoke during the 90th anniversary of the UPU urged the President-General, Chief Moses Tiaga, to prune the aspirants and warned against pull-him-down consultations and campaigns of calumny.

“He said: “When there are too many sons and daughters in a race, it creates its own challenge. The elders understood this. There is a need to trim down and I believe that the time is now.” (End of quote).

It was pursuant to this that the DC-23 commenced the process which produced David Edevbie, Sheriff Oborevwori and Kenneth Gbagi.

Note that the advice by Okowa was to the UPU and it has only further acted to prune down to one consensus candidate in view of the current political exigency.

It was therefore strange that when the UPU published their verdict on Sunday morning there was a flurry of intimidation of Delta Central PDP leadership and LGA Council Chairmen by state government and top party officials to disclaim the position of the UPU and insult the leadership of Olorogun Moses Taiga.

We are aware that the first draft allegedly sent by Dr Michael Tidi, the Council Chairman of Warri South, was so vicious and insulting of the Urhobo cultural leadership that the Delta Central LGA Chairmen rejected it. Regardless, they proceeded to redraft it in more subtle and appealing tune and signed.

In signing such negation of the position of the leadership of the Urhobo nation, we can understand their dilemma and difficulties given the intimidation that informed the orchestration.

We are well aware that in their mind and spirit they agree with the judgement of the UPU but only lacked the courage to express so.

Unfortunately, their action amounts to a total betrayal of the Urhobo nation and the selling of their soul. They were told by strangers to insult their fathers and ancestry and they did just that.

We also sympathise with their poor understanding, poor sense of history and poor judgement in stating that, as a socio-cultural organisation, the UPU should not have involved itself in guiding the political direction and destiny of its people. Again, note that Okowa advised the UPU so.

If the topmost cultural body of any society does not care about the political future of its people, such organisation is not only unworthy of its call but such society is doomed.

Perhaps the Delta Central PDP Exco, LGA Chairmen and Urhobo sons and daughters who have been employed to criticise the UPU ought also to have cast their minds back to 2014 when the Anioma Congress comprising Traditional Rulers, Opinion Leaders and Academicians under the leadership of our highly respected father of Delta State, the Asagba of Asaba, Obi Prof. Chike Edozien, endorsed Sen Dr Ifeanyi Okowa as the best out of over 10 aspirants from Anioma nation.

The process then, just like the UPU’s, was quite elaborate as the then aspirants of Delta North extraction submitted themselves to same procedures of scrutinisation that even took them to Lagos to be evaluated by a Committee headed by the respected Chief Phillip Asiodu who then submitted their findings to the Asagba led Anioma Congress for declaration.

Again, for the avoidance of doubt, the involvement of Anioma Congress in the selection of the best candidate from Delta North was also well captured in the December 14, 2014, report of the Vanguard and other newspapers as follows and public for anybody cares to confirm:

The report read:
“Dr. Okowa emerged tops in the screening organized by Anioma Congress to trim the number of aspirants from Delta North. He was followed by Hon. Victor Ochei and Hon. Ndudi Elumelu… The Secretary General of Anioma Congress, Sir Dan Okenyi told Saturday Vanguard that “the victory of Dr. Okowa is a vindication of the work of Anioma Congress.” Sir Okenyi said even Dr. Goodluck Jonathan has called the Asagba of Asaba, Prof. Chike Edozien, to commend the foresight of the Anioma Congress.” (End of quote)

The question therefore is what makes the action of Urhobo Progress Union different now? If Anioma Congress, being a socio-cultural body, did the same thing in Delta North in 2014 from which Governor Okowa emerged, why is the UPU being castigated, blackmailed and insulted for doing just the same with their own people?

Sadly, a number of the stooges from Delta Central today who now occupy some form of political office are either too hungry or too timid to stand in defence of their Urhobo nation or were too young then and not familiar with the Anioma Congress endorsement.

It appears also that the current Delta State PDP leadership is either not informed that the Anioma Congress took the same process to put present their best who became Dr Okowa or have chosen to be duplicitous.

What is more annoying however is the deployment of the party machinery to insult and desecrate Urhobo land to satisfy the bidding of his master to saddle Deltans with a puppet that lacks the intellect, managerial and administrative capacity to govern the state and represent Delta in both the national and international comity.

Worse still is the attempt to create division and conflict among the various brother kingdoms of Urhobo land to promote their own narrow political interest.

On this, we call on all Urhobo and brother Deltan ethnic nationalities to be vigilant against ongoing evil attempts to destroy our collective cultural unity for the political gains of a few terrible people.

While we forgive the saboteurs who have colluded with external agents to bring Urhobo nation and its leadership to public disrepute, we call on all Urhobo to disregard their statement of dissent and stand up for Urhobo and with the UPU to protect the rights and integrity of our cultural ancestry.

We also especially urge the delegates of the PDP to be bold to rise up for Delta and to defend the PDP slogan of “Power to the People” rather than submit themselves to be enslaved by a few individuals whose interest is only selfish.

Peace unto all our ethnic nationalities!