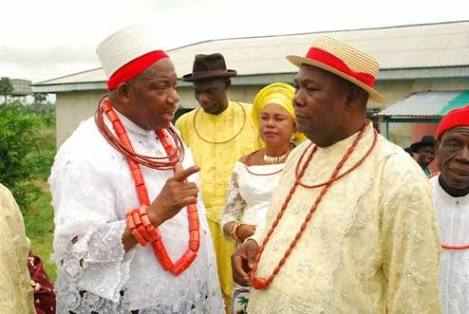 The Urhobo nation is in the throes of a major tumult arising from concern over an alleged involvement of top government officials said to be opposed to the endorsement of Olorogun David Edevbie, but who have commenced moves to effect the removal of the incumbent President General of Urhobo Progress Union (UPU) Olorogun Moses Taiga and replace him with the return of his predecessor, Olorogun Joe Omene.

The development is contained in a statement by Chief Alfred Etinagbedia and Dr. Joe E. Orakpor.

The duo, while claiming that Olorogun Omene has been ostracized by the Urhobo nation, pointed out that he is event currently in court challenging Olorogun Taiga over Taiga’s election in 2016.

They also alleged that those behind the plot hope to achieve their aim through the court, which was supposed to deliver judgment today, Tuesday, April 26, 2022 but has moved the date to May 9, 2022.

Chief Etinagbedia and Dr. Orakpor in their joint statement are calling on all Urhobo sons and daughters to resist, what they called the sinister motive of the enemies of Urhobo nation.

Below is full text of the statement:

. WHY IS OMENE SINGING A NEW SONG NOW?