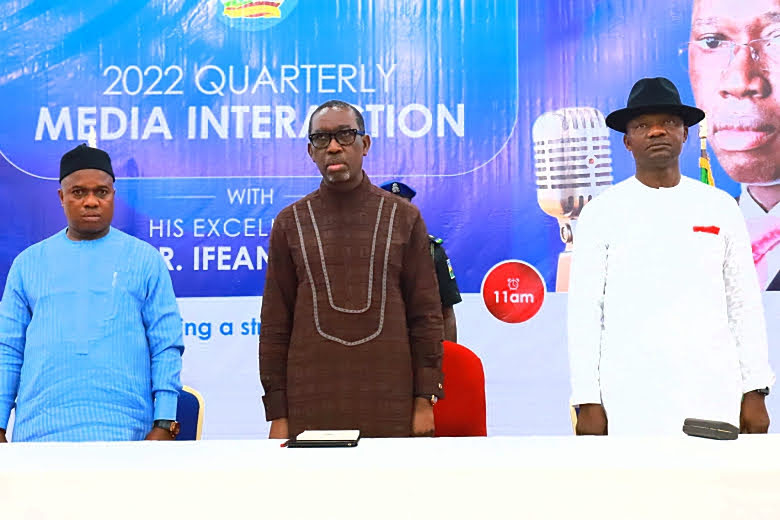 Governor Ifeanyi Okowa of Delta said N150 billion “Bridging Finance” facility was not a fresh loan but an advance from the N270 billion owed the state by the Federal Government.

Okowa stated this on Thursday at the quarterly media briefing at the Press Centre, Government House, Asaba.

He said that the N150 billion had been tied to projects embarked upon by his administration and his predecessor, explaining that the reason people questioned the approval of the facility by the House of Assembly was due to lack of information.

He pointed out that his administration would not take any decision that will jeopardise the peace, unity and overall transformation of the state.

Okowa used the forum to debunk rumour of endorsement of any aspirant in all elective positions ahead of 2023 general elections, promising that the primaries of Peoples Democratic Party (PDP) would be fair, transparent and credible.

“I have not endorsed any aspirant for any elective positions in the forthcoming general elections in the country. We shall provide free, fair, transparent and credible party primaries,” the governor said. He then called on the aspirants to go to the field and work.

On the allegation that he hijacked the list of delegates, he described it as the handiwork of mischief makers, stressing that those who were out to derail the process did not succeed.

For those criticising the policies and programmes of his administration, Okowa advised them to be factual, and assured that nothing would derail him from fulfilling all his electioneering campaign promises.

Meanwhile, the governor cautioned political office holders to, at all times, speak truth to power irrespective of party affiliation.

He said the allegation of N2 billion allegedly spent on political appointees was untrue, and dismissed the statement as “most unfortunate”.

Goernor Okowa said: “It is a very unfortunate statement. It doesn’t show any sense of maturity.Iknow that the amount paid is not anywhere near N100 million not to talk of N2 billion.

“It is not right making statements to denigrate your state. I was once in the Senate. I don’t think they have done well; the records are there.”

Answering a question on the Oleh disturbance, the Governor expressed regrets that such a thing where 12 persons were killed, saying its an unfortunate situation because no human being can create life. He announced that the State Government had waded into the matter and investigation has been done. “Government will release white paper on the Oleh situation,” he said.