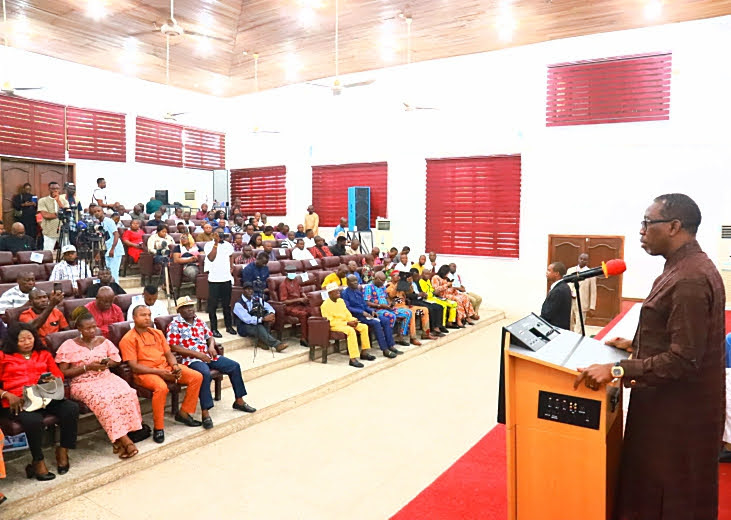 Delta Governor, Senator Ifeanyi Okowa, on Thursday, called on Deltans to place high premium on the protection of public infrastructure in the state.

Okowa made the call while responding to questions at the quarterly media chat with journalists held at the Press Centre, Government House, Asaba.

He noted that the level of vandalism of public infrastructure in the state was quite alarming, adding that community leaders should join hands with the state government to ensure that the ugly trend was nipped in the bud.

According to him, recent events had clearly shown that furniture and other valuable items in primary and secondary schools have become targets for vandals, pointing out that the situation was quite unfortunate.

“The issue of vandalism of public infrastructure is very disturbing at the moment. I want to appeal to our young ones who indulge in such act to desist from it.

“People coming to destroy windows, ceiling and other infrastructure in government facilities in the state was unacceptable.

“Government cannot police all the schools in the state; there is need for community leaders and other stakeholders to partner government in protecting public infrastructure,” the governor said.

On Warri Uvwie and Environs Development Agency (WUEDA), the governor promised to look at what is happening in the agency with a view to ensuring that all is well.

He pointed out that a lot was being done about the security situation in Warri, adding that his administration was doing everything within the limit of available resources to deliver the much needed dividends of democracy to Deltans.

Justifying the establishment of three new state owned universities in the state, the governor said over 4,500 students have been offered admission in the new universities which, according to him, had helped bridge admission gap in the state.

On the 2023 presidential election, the governor said he has not been led to run for the presidency of the country even though there was a lot of pressure on him to run from different parts of the country.

“I have not been led to run for the presidency of the country in the 2023 general elections even though there are a lot of pressure on me to run from different parts of the country,” he added.

Meanwhile, the governor urged journalists in the state to join hands with his administration in preaching peace and sensitising the people against indiscriminate dumping of refuse in drainage channels across the state.

Earlier in his remarks, the Commissioner for Information, Mr. Charles Aniagwu noted that journalists in the state have been very supportive in propagating the policies and programmes of the state government, even as he urged them to sustain the tempo of partnership.

In his speech, the Chairman of Nigeria Union of Journalists (NUJ), Delta State Council, Comrade Michael Ikeogwu expressed appreciation to governor Okowa for his media friendly disposition, adding that journalists in the state were very happy that the state government had done well in the secretariat of the union in the state.