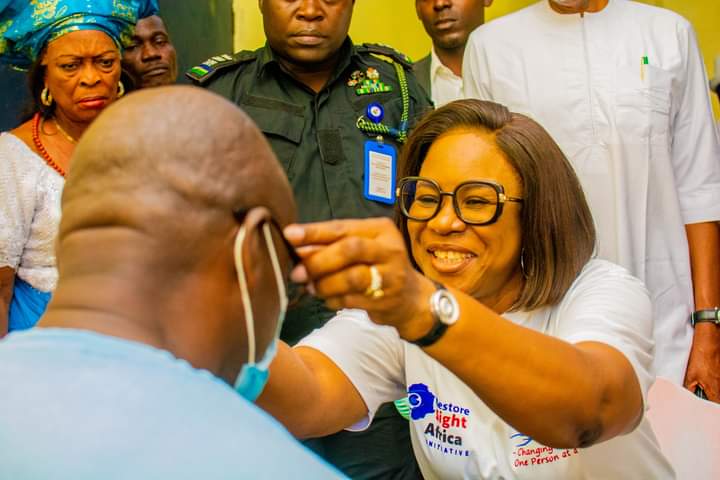 “I may not be a medical personnel but I am very interested in the health of all Deltans.”

This was the remark of the wife of Delta State Governor, Dame Edith Okowa while flagging off another five-day free medical outreach at Sapele Central Hospital in which over 5, 205 from four federal constituencies were attended to.

Dame Okowa expressed concern over the state of the economy and how current realities have taken their toll on the health of people.

“We are careful not to sound negative but we know how ‘wonderful’ things are in the country at the moment and that is why we encourage people to be their brother’s keeper.

“It is sad that in this clime, people do not often place value on services that are free.

“We have been to other Federal constituencies within the state, doing free eye surgeries, dispensing glasses and drugs alongside screenings.

“We thus expect that those who have benefitted act as messengers of good news by reaching out to others to come and benefit as well”.

Addressing other issues besides eye care, Dame Okowa said, “We have a functional sickle cell clinic in this hospital and it is quite alarming that some persons do not still know their genotype.

“We have preached the gospel of awareness long enough for people to key in and check their status so as to curb the issue of sickle cell disorder.”

She appreciated those who have partnered with the O5 Initiative, her pet project including the Restore Sight Africa Initiative and the State Ministry of Health for their continuous support.

So far, over 5, 205 persons from four federal constituencies have been attended to in the course of the outreach. A total of 736 surgeries have been performed, 3,298 glasses dispensed alongside 1,730 eye drugs.

The co-ordinator, Restore Sight Africa Initiative, Dr Ernest Ogbedo in his remarks at the opening ceremony affirmed the team’s commitment to attending to the eye care needs of the people.

“We must, however, emphasize that we came for the voiceless and vulnerable, not the honourables.

“Due to the nature of our profession, we have travelled far and wide across the nation and the truth is that in the entire Nigeria, no state has received eye care as much as Delta State,” Dr. Ogbedo said.

The chairman, Sapele Local Government Area, Hon Eugene Inoaghan appreciated the wife of the Governor on behalf of the people of the Constituency.