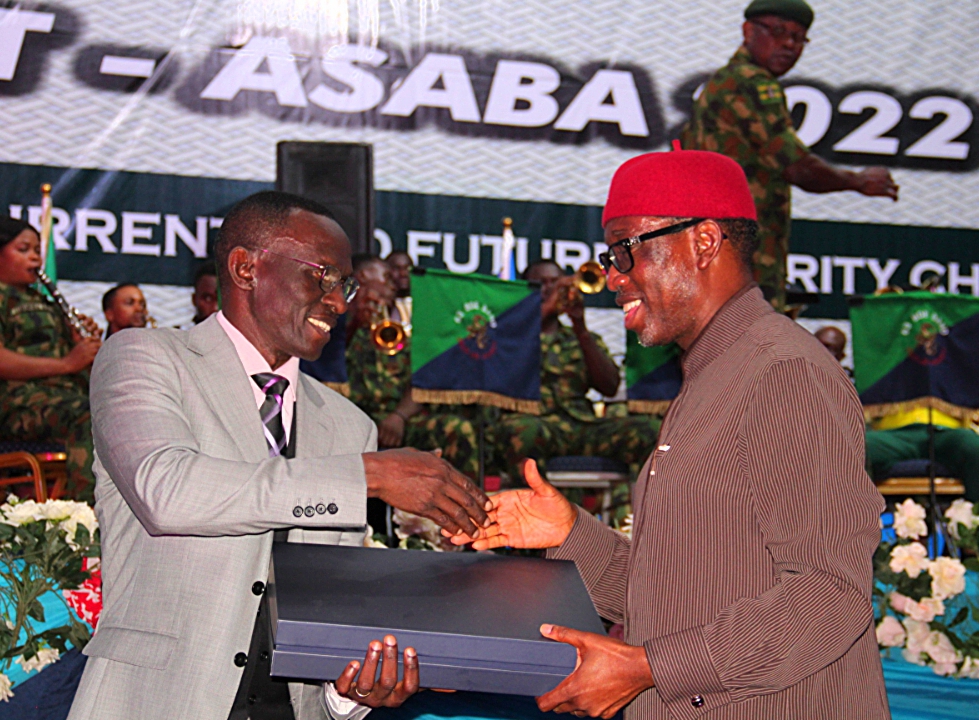 Delta Governor, Senator Ifeanyi Okowa, has called for stronger collaboration between security agencies and the civilian populace to engender greater peace and security in the country.

Okowa made the call at a gala night on Friday to round off a four-day defence retreat tagged ‘Asaba 2022’ which was held at the Events Centre, Asaba.

He pointed out that there must be a strategic engagement by security agencies, particularly the military, with the civilian populace, saying that such synergy would build trust and make Nigerians to truly work together in securing the nation.

According to him, security is something that is not limited to the military or the police or other security agencies, but includes civilians because we have a lot of roles to play.

“I believe that it is well with this nation and that a strong collaboration between our security agencies and the local population would continue to help us achieve greater peace in this nation.

While lauding the Chief of Defence Staff (CDS), General Lucky Irabor for holding the defence retreat in Asaba, the governor commended military officers and men for the great job that they had been doing for the nation.

“First, we thank God for a very successful defence retreat in Asaba, Delta State and l want to use this opportunity to again, register our pleasure that the CDS brought this retreat down home to Asaba.

“There is no doubt that God has made it possible for us to have relatively peaceful state and the fact that we are able to attract this retreat to Asaba is in itself, a testament to the fact that the state is peaceful.

“And, l am grateful to all the security officers that helped us to maintain relative peace in this state and we pray that God will continue to help us to achieve lasting peace, not only in Delta but in our nation, Nigeria.

“I believe that this kind of retreat is the best retreat; it is something that should be hosted often in this nation because it gives room for people to truly share ideas and l think that that is what you have been doing in Delta State in the last four days,” he said.

Okowa stated that the nation was in very difficult times, and advised that “if we spend more time to interact with ourselves, we can truly better equip ourselves on how best to ensure peace in our nation and how to secure both our borders and to ensure that we are able to maintain peace within the country.

“In spite of all that we do, there is a lot that still needs to be done in terms of equipping our security agencies and providing the needed logistics at the appropriate time for them to be able to tackle the security challenges in the country.”

The governor opined that Nigeria must do everything possible to encourage security officers and men, especially as it concerns their welfare because, according to him, when men are out there working for us as a people and as a nation, they deserve some level of comfort.

“l believe that they (security officers and men) would also work harder if they are able to take care of their families back home because when there are pressures from home, it becomes very difficult for any officer to be able to put in his or her best in the duty he or she is called upon to do.

“So, l hope that both at the national and sub-national levels, those of us in government would continue to do the best we can to truly encourage our officers and men in the course of their duties,” he said.

The governor noted that a lot had truly been done in the development of infrastructure in the education sector of the state as a result of the prevailing peace, insisting that
“because we believe that the more we truly take out our children from the streets and educate them, the more likely you are going to have peace in the future.”

He disclosed that the state has four universities three of which, he said, came on board last year, adding that just last year alone, about 4,000 students were offered admission to study various courses accredited by the National Universities Commission (NUC) in the new universities.

Earlier in his remarks, General Irabor thanked Governor Okowa for the very elaborate arrangements put in place by the state government to receive the military officers and to host them, adding that they had a brainstorming session at the retreat.

The CDS pointed out that the objectives of the defence retreat were achieved, adding that the retreat afforded them opportunity to look at a broad range of military activities in a bid to ensuring that security was strengthened within the country.

“It was a time that we looked at a broad range of military activities all in a bid to ensuring that we strengthen the disposition of security within the nation and seeing how best we could ensure that every man or woman, boy or girl and of course, visitors to the Nigerian space, live out their dreams and aspirations.

“I like to assure that going forward, there would be indeed, a heightened state of activities within the armed forces; greater sense of interaction with other security agencies and other stakeholders so that together, the aggregate of our interaction will be for enhanced security of the nation.

“I know that Asaba 2022 will indeed, remain a pillar as we go forward to achieving these set goals,” the Chief of Defence Staff added.

The highlight of the ceremony was presentation of souvenirs to some personalities within and outside the military cycle including Governor Ifeanyi Okowa.