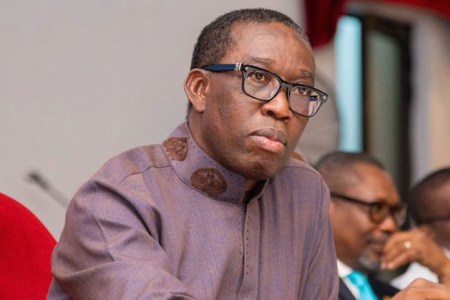 Governor Ifeanyi Okowa of Delta has called on Nigerians to participate actively in the political process to ensure good governance and democratic sustainability in the country.

He stated this on Thursday in Asaba at a two-day Seminar/Workshop on “Good Governance and Democratic Sustainability vis-a-vis Electoral Process” organised by the Asaba Correspondents’ Chapel of Nigerian Union of Journalists (NUJ), Delta State Council.

Represented by the Commissioner for Information, Mr Charles Aniagwu, the governor said that it was imperative for Nigerians to participate in the political process to enthrone credible leadership in the country at all times.

According to him, you as citizens need to participate in politics because when you don’t vote, you have inadvertently voted for those who are coming to do the wrong thing.

“Once you are 18 years and above, you need to register and have your voters card and come out to cast your vote on election days.

“Once you have done that you have ended up helping in the sustainability of democracy in the country,” he said.

The governor appealed to seminar participants to take the message home to members of their families saying “God will not come down to vote if you don’t prepare to vote.

“The people get the leadership they deserve, meaning that if you don’t vote you would have ended up voting for the wrong people.”

He commended the Guest Speaker, Senator Shehu Sani, for his outspokeness and contributions to the growth and sustainability of democracy in Nigeria, describing him as a “firebrand leader and a man who speaks truth to power”.

He lauded journalists in the state for their support and commitment to the dissemination of information on his administration’s programmes and policies to the people.

“As a government, we are pleased with members of the Asaba Correspondents Chapel and other journalists in the state because they have supported us in the last seven years, propagating our programmes and polices to the people.

“I speak authoritatively because I have had cause to relate with you all and you believed in honesty and had continued to tell the story just the way they are.

“We are very much aware of the overtures of the opposition to get you to tell stories that are at variance with the state of affairs especially with the N150billion bridging finance facility.

“We do not begrudge those who reason along that trajectory because they do not understand what governance is all about.

“Okowa’s mandate will expire on May 29, 2023 and until the expiration of that day he will continue to work until the last day.

He said his administration has successfully completed over 850 roads spanning 1,650km and line drainages across the 25 local government areas in the state.

“We have also directly empowered over 10,000 Deltans because we believe that it will reflate our economy and improve the standard of living of Deltans

“Currently we are vigorously building 10 Model Technical Colleges in addition to the existing 6 we rehabilitated and we hope to  inaugurate them before we leave office,” he said.

The governor further remarked that the political appointees he engaged have helped in expanding the frontiers of democratic governance.

“In 2015 when we came on board Delta was 4th position in oil production but today we are number one oil producing state in the country.

“We became number one not because we acquired new oil wells but because we got a number of youths involved in productive services and hence the peace we are having today in the state,” he stated.

Guest Speaker, Senator Shehu Sani said Nigeria’s democracy was not a gift given by the military but a product of struggle and sacrifice.

He said Nigeria was effectively under full time military rule from 1983 to 1999 where the military forced themselves on power and commended the role played by Professor Wole Soyinka, Gani Fawehinmi, Col Abubakar Umar, Beko Ransome-Kuti among others

“Nigeria’s democracy is a product of the blood and sacrifice of many who fought for it and so we have a duty to protect and preserve it.

“We cannot continue to do what we used to do when our population was small and now that we are over 200million people.

In today Nigeria, people prepare for elections as if they are preparing for war because most leaders don’t see political office as an opportunity to serve but a position to conquer the people.

He said the only way to achieve peace in the country is by ensuring equity, justice, fairness and treating every Nigerian as a stakeholder in the country.

“If leaders behave as religious or ethnic champions then they are sowing seeds of discord. Only justice, equity and fairness that can keep the country one,” he added.

He accused the ruling All Progressives Congress APC as a clueless and failed party who never fulfilled all the promises made to Nigerians in 2015.

“The APC said PDP destroyed the country but ironically 70 percent of members of the APC today came from the PDP so they have also been part of the problem.

“The APC failed on all the promises they made to Nigerians since 2015 and almost everything the ruling party accused the former government of, they are also doing presently.

“In Kaduna state today, only two out of the 23 local governments in the state are free from bandits and kidnappers.

“Kidnapping for ransom has become a daily occurrence in the Northern part of the country where people sell their farms or homes to pay ransom for their kidnapped loved ones.

The ruling political party has failed in their promises to restore law and order and we have seen how lives have been lost not just civilians but police, soldiers and other security personnel.

The APC government has so far spent N4.2Tr for Defence and Security in 7 years yet insecurity has remained unabated.

“We spent $1billion to purchase Tucano jets and this has not stopped kidnapping, banditry and terrorism in the country.

“The terrorists are only armed with motorcycles and Ak-47, yet we keep pumping billions of dollars into security and defence without achieving results.

“Kidnappers call relatives for ransom with Nigerian registered aims but yet no trace of anyone arrested,”

On the nation’s precarious economy, he accused the ruling party of accumulating debts and took a swipe at the National Assembly for approving all loans requested by the Buhari administration without proper use.

“The National Assembly is now a rubber stamp because they approved $35billion dollars in two years for the Buhari administration yet we can’t see what they have done with the money.”

He described the PDP as too elitist and too timid to come out to protest all the evil happenings in the country.

“The PDP has forgotten what the APC did to them in the past, If the PDP is desirous of taking over power from the APC, there must be unity among themselves and they have the people to do it.

“I say this because 80 percent of the people vying for the presidency of this country are not serious.

The former Senator said democracy could only be sustained if we can ensure free, fair and transparent elections, adding “it’s difficult for good people to emerge because the whole process is monetised, people buy their positions,” he said

He said the payment of N100m to purchase nomination forms will end up encouraging kidnapping, because no matter how good you are you can’t be anything until you have money to share for the people.

“As we move towards the 2023 elections, the ruling party has nothing more to offer they should leave us in peace and allow Nigerians to grapple with their problems as long as they don’t have bandits and terrorists harrasing them.

“The reality is before us as Nigeria is now the poverty capital of the world, farmers cannot go to their farms without paying taxes to terrorists

“Don’t think because people are suffering that they would vote out the ruling party, if you are not united it will be difficult to oust them.

“The most critical voter in Nigeria is the Northern poor and they are in millions, they don’t vote because they are suffering, they vote where their leaders asked them to vote.

If we want this country to remain as one, we have to treat each other with respect and dignity and you can’t continue to hold people to ransom for the civil war that happened many years ago.

“If people have lost hope in the ruling party then they are expecting and hoping that the opposition would do better.

“As we move towards the 2023 general elections, Nigerians have a duty to do what is right by electing leaders who can perform and restore law and order in the country

“All we need is a leader with capacity, competence and experience and the people around you who share in your vision,” he stated.

Welcoming guests earlier, Chairman of the Chapel, Dominic Adewole, said the theme of the Workshop was carefully chosen as part of deliberate effort to broaden the discourse on the fast approaching 2023 general election in the country.

He added that the success of next year’s election is largely dependent on the observance of the provisions of the new Electoral Act by the umpire, INEC, and political stakeholders.

“With the political atmosphere at a fever pitch as the nation marches towards yet another dispensation in the democratic process, this topic couldn’t have come at a more appropriate time.

“It is with this in mind that this seminar has been put together to sensitise stakeholders on their roles in the new law as we approach 2023,” he stated.

The seminar was attended by Chief Press Secretary to the Governor, Olisa Ifeajika, State Chairman of NUJ, Comrade Michael Ikeogwu, representative of the State Commissioner Police Mr Mohammed Ari among others.