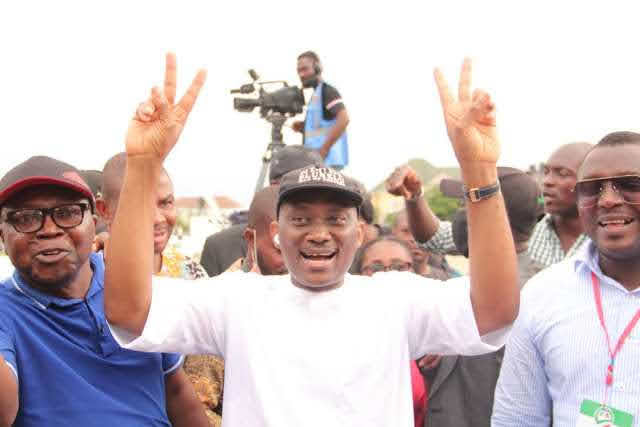 Rt. Hon. Elumelu on Sunday, May 22 was declared the winner of the election by the Chairman of Delta State Electoral Committee, Rt. Hon. Funkekeme Solomon having scored 80 votes out of 132 accredited votes for the election conducted at the cenotaph, Asaba.

With the declaration of Elumelu as the winner in the delegate’s election, he becomes the PDP flag bearer for the House of Representatives, Aniocha/Oshimili Federal Constituency for the 2023 general elections.

Speaking with Journalists, Elumelu appreciated God for the success of the election and dedicated his victory to Him while thanking members of his family for their strong support in the past few months.

The Minority leader who was highly elated also paid tribute to the Delta State Governor, Senator Dr. Ifeanyi Okowa for the roles he played in his emergence as the Aniocha/Oshimili federal constituency candidate.

“I feel very happy; I thank the Almighty God, only Him has done this. Most importantly, I thank my family, they have given me all the support. For this few months, they have lost me because of this election. I give them thanks; I thank my mother for being a wonderful mother,” he said.

“I thank my brothers – Peter, Tony, all of them. Most importantly, I thank my governor, the Ekwueme of the universe. My federal constituency will always stand by you; whatever you ask us to do, we will do.

“Thank you so much for providing the enabling environment for me to come out victorious. Most importantly, let me thank the hierarchy of PDP in Abuja led by the National Chairman, Dr Iyorchia Ayu, for allowing transparency in all the processes that have happened today, Elumelu stated.

He also commended the delegates for casting their votes for him and said that he will continue to hold them and the party in high esteem.

The minority leader later proceeded from the venue of the event in Asaba to St. Paul’s Catholic Cathedral, Issele-Uku where he attended a special thanksgiving mass in his honour.

The thanksgiving mass, officiated by a team of Catholic Priests, led by Rev.Fr. Stephen Chukwuku was also joined by the Principal Secretary to the State Governor, Mr. Hilary Ibegbulem and some members of Rt. Hon. Ndudi Elumelu Campaign Organization.

Elumelu was later given a rousing reception by his people in his home town, Onicha-Uku in Aniocha North Local Government area of the State.