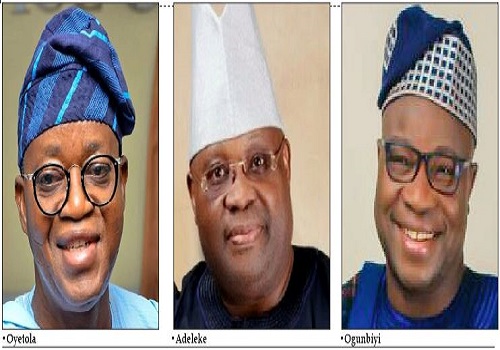 In a matter of weeks, voters in Osun will again cast their ballots to elect a governor who will run the affairs of the state for the next four years. With governorship candidates drawn from different political parties fighting hard to occupy ‘Bola Ige House’, July 16, 2022 promises to be a battle of wits between diverse contenders: the incumbent with experience on the one hand, and the political greenhorns, on the other hand, all jostling for the highest office in the state.

Without a shred of doubt, it will most certainly be a clash of supremacy between unpretentious reality and fictive perceptions. As we all know, good leadership is about vision, empathy and passion for governance. With so much at stake to take the state to the Next Level of its development, the time for casting predicaments on primordial sentiments as the oxygen for winning support is over.

With the situation of things on ground, coupled

with the urgency to make things work better, the lot falls on the electorate to look for a candidate who has the capacity to inject a clear strategy and requisite tenacity to push through development plans, irrespective of inhibitions – anticipated or otherwise. Such a candidate must be prepared to devote more energy to the provision of “inclusive governance strategy” and “improved conditions and welfare of the citizenry.”As the saying goes, ‘one good turn deserves another.’

By now, the good people of Osun are governance-conscious! They can see for themselves how far the governor has gone to make life meaningful for them! As such, they cannot be cajoled by empty political brinkmanship! Judging by the results of the last Governorship Primary of the All Progressives Congress (APC) in Osun State, one can also safely conclude that Gboyega Oyetola’s government was well-received as a total package of good governance. Outcomes of various opinion polls conducted in the state also affirmed these affective feelings. Of course, this is an important advantage to the governor! That he is therefore the governor to beat is no longer news! He has all the advantages. What he has done, rather, than mere campaigns, will secure victory for him. As a matter of fact, his victory is sealed and delivered!By the way, compare Oyetola’s administration with previous governments and one will find out that, from all sides, it has been songs of improvement to the people. That he has governed Osun – not by mere promises – is there for all to see. The good news is that the governor has not only fulfilled all the promises made during the 2018 campaigns but also laid the foundation for a knowledge-driven economy. Obviously, this has helped a great deal in shaping values through morals; which therefore implies that, whoever wants to contest against the Iragbiji, Osun State-born administrator in the forthcoming election must also have that in his kitty. Otherwise, frittering resources that could be channeled to alternatively profitable economic ventures and investments can only be likened to a monkey who misses its branch. Surely certainly, the hallmark of development is when one is not afraid to review or reappraise policies. In a clime where a thick and suffocating cloud of concern envelopes everywhere, the governor opted to commendably blend into the mood of the society. It is therefore pertinent to note that, within a short period of four years, his passion for functional education and accessible healthcare has been awesome even as his radical approach to urban renewal projects remains an authentic source of lessons in performance. Talking in specific terms, Oyetola has built and equipped schools and employed manpower resources to manage them. He has constructed and/or reconstructed not less than 2,000 kilometers of roads and revitalized about 332 Primary Healthcare Centres (PHCs), thereby ‘guaranteeing healthcare facilities in all communities across’ Osun. His investment in Agriculture is huge and has begun to yield fruits. Through his friendly policies and provision of an enabling environment, Commerce is bourgeoning even as investors are being continually attracted to the state. In the area of security, ‘Ileri Oluwa’, as he is fondly called, has not been inadequate.Despite the struggling national domestic economy and the attendant pressure on our political system, Oyetola has done his best to sustain the local economy. His administration has not taken a dime as loan since assumption of office, a situation which would have worsened the people’s level of impoverishment. He has also ensured that civil servants and pensioners get their salaries and allowances promptly. He has not been frivolous with the state’s meager resources and the bottlenecks which, hitherto, provided props and backdrops for leakages and wastages, are consistently being blocked. Another quality working for this man of many parts is that he is an unregretful progressive. Take for instance how he tried to review the policies of the immediate past government to reflect the current yearnings of the people! Why many people may not understand the reason behind the review has to do with the fact that significant members of the society had reservations for some of these policies and had made such known to the government through a feedback mechanism. And the government acted in utmost good faith! Well, it is interesting to note that, as at the time of putting this piece together, I doubt if there is any feasible thing about the opposition in Osun. As of now, coordination among the parties partaking of the July 16 election remains elusive. For a party that’s going into an election in less than two months not to have settled in terms of candidature can only confirm that failure has already acquired a life of its own within the opposition. Talking specifically about the People’s Democratic Party (PDP), which, unarguably, is the major opposition party in the state, the question is: if a party cannot successfully run its internal affairs without factionalizing it, how will it run a state as sophisticated as the ‘State of the Virtuous’? That’s a major issue; for it only presents the opposition as a crude blend of unserious and disorganized contenders. Apart from the major opposition party that has been gallivanting all over town like a miniature version of the theatrics associated with our Nigerianness, the perception of other opposition political parties boastfully beating the war drums preparatory to July 16 only reflects the influence of their registered candidates. Anyway, since their gods “have ears but cannot hear, noses but cannot smell”, Osun APC need not patronize specialists in vigils of marathon significance, or carouse with restless permutations before bringing these tiny politicians to their knees.Lastly, the frightening truth is that, in powerplay, things are not what they seem! How do I mean? It is a global phenomenon that emergence of candidates, if not properly handled, possesses the proclivity for rupturing the structure of political parties, even to the point of becoming a trophy of victory for the opponents. Yes, discreet investigations have shown that Osun APC is one, which is a huge plus for the Gboyega Famodun-led party. But then, one can only hope that it would do the needful in terms of reconciliation of some few people who may have been offended, pre- and post-APC primary elections, which, coincidentally, are just a month or so to Osun governorship election!May the Lamb of God, who takes away the sin of the world, grant us peace in Osun State!*KOMOLAFE wrote in from Ijebu-Jesa, Osun State (ijebujesa@yahoo.co.uk)