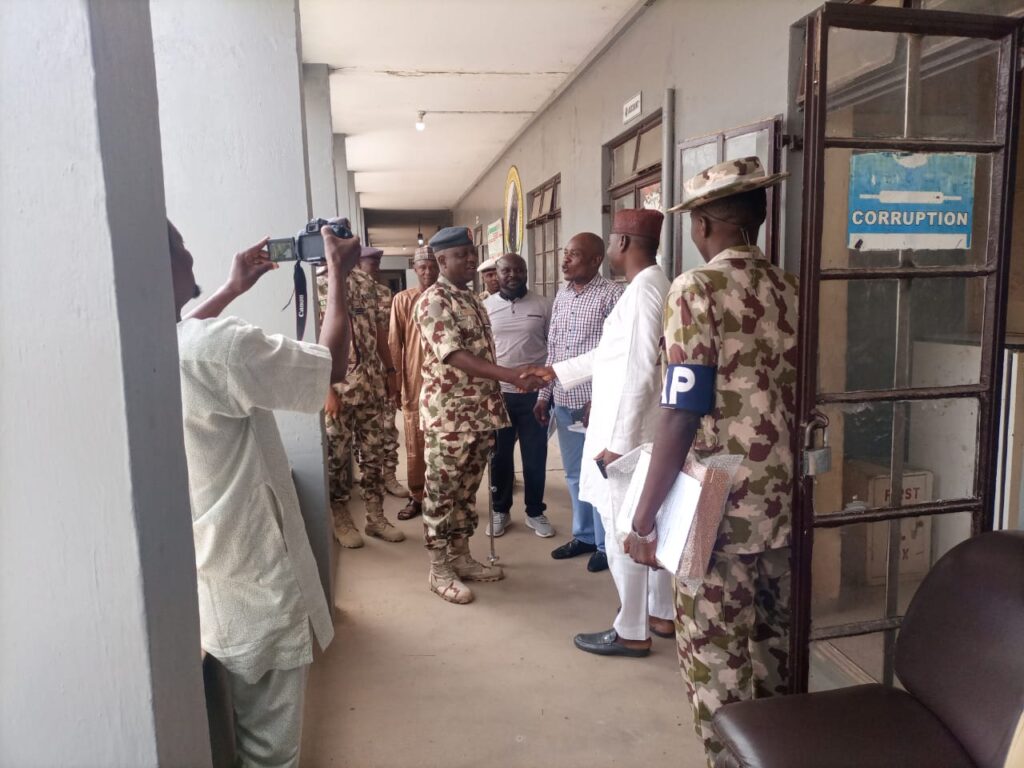 FERMA, Air Force Base, Kaduna interact for synergy in operations

Officials of the Federal Roads Maintenance Agency (FERMA) and the 453 Base Services Group of Nigeria Air Force, Kaduna have begun interaction that will engender synergy in their respective operations for mutual benefit.

This was established when the Commander, 453 Base Services Group of the Nigeria Air Force, Kaduna, Air Commodore Adeleke A. Adedoyin paid a courtesy visit to the office of FERMA, where he met with the Maintenance Engineer, Engr. Dr. Atiku Abubakar Sadiq.

During the interaction, the mandate of the Federal Roads Maintenance Agency, FERMA, which is primarily to maintain all federal roads in Nigeria, and not a feat that FERMA can achieve alone was made known.

He commended the 453 Base Services Group Commander for the courtesy visit, aimed at seeking ways FERMA can complement its activities and vice versa.

Dr. Atiku commended Air Commodore Adedoyin and his team for the visit which he termed as timely, and expressed his gratitude to the 453 Base Services Group of the Nigeria Air Force. He assured of the readiness of FERMA to collaborate with the NAF on areas that are within the purview of the agency (FERMA), based on the approval of the management in Abuja.

Reacting to questions as regards the robust relationship of the 453 Base Services outside of the military circle, Atiku welcomed the gesture, that is, outside of official duties, saying the relationship can also exist in such a way that will be beneficial to all, personnel and staff alike.

Engr. Dr Atiku, in his welcome address at the event, described the visit of Air Commander Adeleke A. Adedoyin as historic.

According to the FRME, Kaduna Field Office, FERMA, since its inception, has identified some key stakeholders, especially the Nigeria Armed Forces, Nigeria Police Force, Department of State Security Service and other security outfits and other agencies of the federal government as major partners in progress that has culminated in a harmonious working relationship towards achieving their respective mandates.

Dr. Atiku recalled the intervention of the road maintenance agency in the Nigeria Military School, NMS Zaria wherein, the Chief of Army Staff sent a delegation led by the Chief of Administration, Nigeria Army Headquarters to the Kaduna Field Office in respect of the “Special Intervention by FERMA.”

He pointed out that, FERMA, alongside the Nigerian Armed Forces, have common similarities as it relates to the presence of a strong and effective engineering team in both the army and FERMA.

“Specifically, the Civil Engineering evolves from the Nigerian Army where it all began, several years ago. It was a group of officers and men of the Nigerian Army that commenced the construction of bridges and roads.”

Air Commodore Adeleke Adedoyin, Commander, 453 Base Services Group of the Nigeria Air Force, in his address, thanked the FRME, Kaduna Field Office of FERMA for the wonderful reception accorded him and his team despite the short notice and the very busy schedule of Dr Engr Atiku Abubakar.

Air Commodore Adedoyin noted that his visit to the Kaduna Field Office of FERMA was to build the needed synergy between the 453 Base Services Group and all stakeholders and in so doing, support them in their respective functions.

According to the 453 Base Services Group Commander, “FERMA is performing a very crucial role in nigeria, particularly as it pertains to the maintenance of federal roads across the country and as such, deserves commendation and support in its drive to deliver on its statutory responsibilities.

“We are keen on having a good inter relationship with agencies and parastatals of government and I must confess that I am quite impressed with what I have seen here today.”

Air Commodore commended the FRME for the exemplary work done so far and wished him greater achievements and wisdom in his engagement while praying for his successes.

He encouraged the audience to feel free to visit the Air Force Base, described as the Premier facility of the Nigeria Air Force, Kaduna and appealed to the FRME, Kaduna Field Office on providing some form of interventions at the Base.

Air Commander Adeleke Adedoyin holds an impressive CV in terms of education and qualifications having graduated from the Nigeria Defense Academy, Kaduna as a member of the 42nd Regular Force.

Commissioned as a Pilot Officer in 1995, Air Commander Adeleke Adedoyin is an Administrator and Personnel Management Specialist of the Nigeria Air Force who attained the rank of Air Commodore in 2018. He is a holder of a Bachelors Degree in Political Science and Defense Studies, NDA; Post-Graduate Diploma, Human Resource Management, Cape Peninsula University, South Africa and a Masters Degree in Peace and Reconciliation Studies, Coventry University, UK.

Air Commodore Adedoyin is also, a member of the Nigeria Institute of Management and Fellow, Chartered Institute of Personnel Management, Nigeria. He is currently undergoing a PHD Degree Programme in Peace and Conflict Studies, in the prestigious University of Ibadan.

He is the past Director of Administration, Headquarters of the Nigeria Air Force.

He is an Alumnus of the National Defense College.