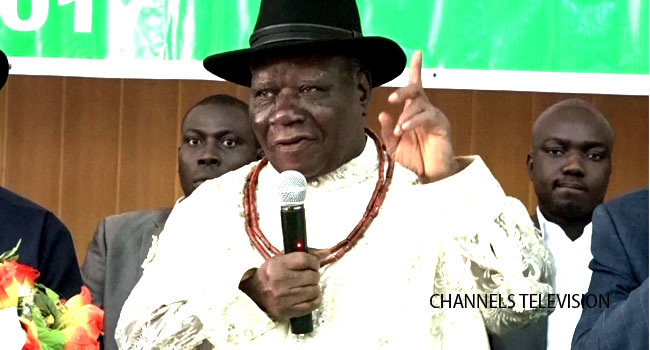 National Chairman of the Peoples Democratic Party (PDP), Iyorchia Ayu, has been urged to immediately resign his position following the emergence of former Vice-President Atiku Abubakar as the party’s flag bearer for the 2023 presidential election.

Clark, in a statement he personally signed on Tuesday in Abuja, said it has become imperative for Ayu to resign as he can no longer head the National Working Committee (NWC) of the PDP.

Ayu is from the same northern region as Atiku.

Clark who is also the leader of the Southern, Middle Belt Leaders Forum and Pan Niger Delta Forum, took a swipe at the action of Governor Aminu Tambuwal of Sokoto State, who stepped down for Atiku Abubakar, at the venue of the convention.

According to him, what Tambuwal did was not only dishonourable, but also a serious electoral abnormality and a tragic betrayal of national patriotism for hidebound interests.

The former Federal Information Minister condemned the reported outrageous financial inducements of delegates and the cynical dollarization of the electoral process, saying that these happenings give strong warnings of more likely, deleterious outcomes of the 2023 general election, mainly the presidential, and their aftermaths.

Clark however hailed the efforts of the Convention Committee that was chaired by former President of the Senate, Senator David Mark, and his assistants, particularly, the Governor of Bayelsa State, Senator Douye Diri.

He said: “Most disturbing is what happened at the Special National Convention of the Peoples Democratic Party (PDP), in Abuja, on Saturday, 28th May 2022. I followed the live broadcasts of the proceedings keenly, until about 12.30 am on Sunday, the 29th. I was alarmed by the outrageous and Machiavelli manner in which Alhaji Aminu Tambuwal, Governor of Sokoto State, was so apparently ‘arranged’ to announce his withdrawal from the contest, at the last minute; his speech changed the mood of the event.

“That was done in order to foist another northerner as the party’s flag bearer; having regard to the fact that Governor Aminu Tambuwal was the only aspirant from the whole of the North-west, which had about 192 delegates at the convention. What Tambuwal did was not only dishonourable but also a serious electoral abnormality and a tragic betrayal of national patriotism for hidebound interests.

“It is now widespread understanding that there were pressures mounted on Governor Bala Mohammed of Bauchi State, and former Senate President, Senator Bukola Saraki, to also withdraw, while Tambuwal deliberately delayed his action till the last minute. By so doing, unduly swept his North-west votes to Atiku Abubakar. One can now appreciate the reasons given by Mr Peter Obi for his withdrawal from the PDP, both as a member, and as an aspirant, few days before the party’s primary. And I would think that what he did was, without doubt, in respect, or obedience, to the position of the Southern and Middle Belt Leaders’ Forum.

“Unfortunately, some aspirants from the south believed that, with the resources and facilities at their disposal, their elders no longer matter, and disregarded, with impunity, the patriotic advice on the need to be steadfast on the position of the zoning of the presidency to the south. They never minded that what we have been advocating was in their interest. They proved themselves to be selfish and arrogant, and thought they could win on their own steam. They failed; I can only hope that they have, now, learned their lessons.”

He further said: “Even much worse, in the extreme, was the action of the National Chairman of the Peoples Democratic Party (PDP), Senator Iyorchia Ayu, in his open visit to Governor Tambuwal to congratulate and hail him, in his words, as ‘the hero of the convention’. This clearly reveals his partiality and predilection in the processes leading to the baffling conclusion of the PDP presidential primary. Senator Ayu has failed to realize that what we are fighting for affects all minorities in Nigeria.

“Senator Iyorchia Ayu’s appalling, thoughtless and unpatriotic public conduct bears grave negative consequences. He should, therefore, no longer consider himself fit and proper to retain his position as the National Chairman of the Peoples Democratic Party (PDP), and should resign now.