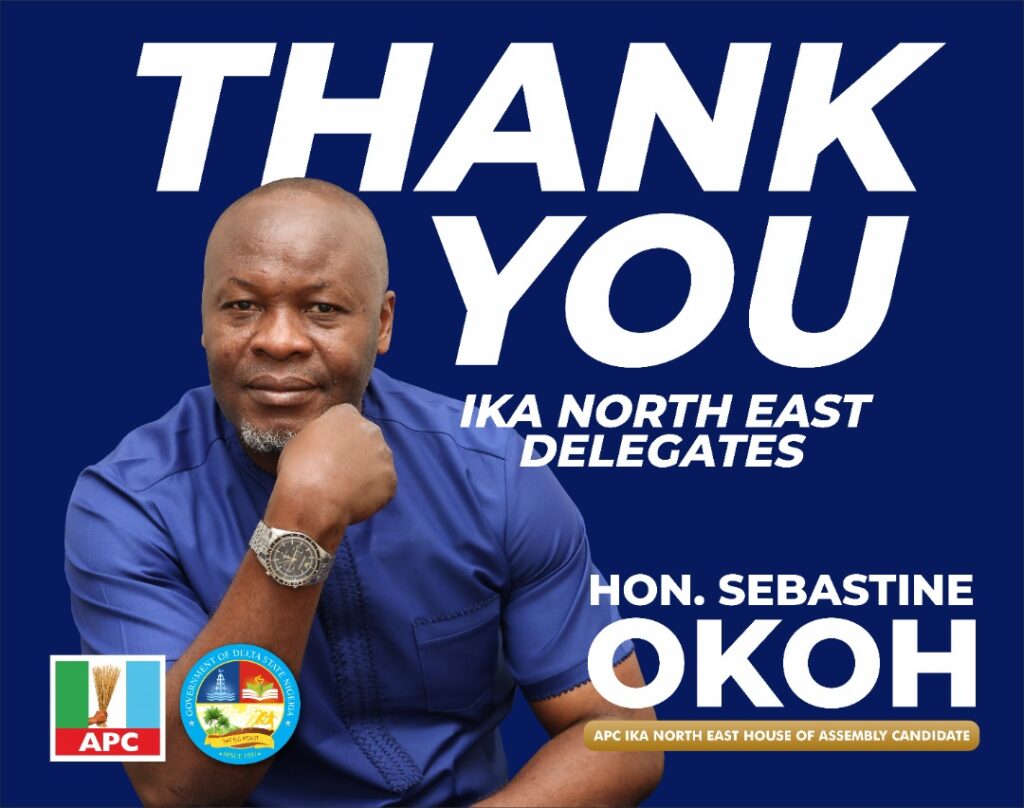 Chief_editor May 31, 2022
Newly elected candidate of All Progressives Congress (APC) for the Delta House of Assembly (Ika North East Constituency) and immediate past political aide to the Deputy Senate President, Hon Sebastine Okoh has expressed his gratitude to delegates for choosing him to fly the party’s flag at the 2023 general elections.
Okoh a former Executive Assistant to the Government of Delta State and Proprietor of the famed Ika Carnival, made this known in a statement by the Sebastine Okoh Media Organization, on Sunday.
He said: “From the bottom of my heart and with every sense of renewed responsibility, I express my gratitude to delegates and stalwarts from Ika North East Constituency, for the privilege of becoming the party’s standard bearer for the 2023 House of Assembly Elections in Delta State.
“I also want to thank Mrs Isioma Odafe, Comrade Promise Ogumu and Comrade Ijeoma Asiwe for being worthy aspirants and partners in progressivism, and for their passion for the Constituency.
Similarly, I express my unreserved appreciation to Engr Teddy Jackson Ngwokor and Hon. Justin Nwaeke Junior, for stepping down their aspirations for me. Your sacrifice will not be in vain”.
The Umunede-born grassroots mobilizer further expressed his readiness for the task ahead, while also calling for all hands to be on deck.
He said: ” From now onwards we prepare for the main elections; I’m therefore calling on all APC members in Ika North East Constituency to brace up for the challenge ahead.
“We have always known the task was never going to be an easy one, but I believe Ika North East APC has something better to offer the people at the House of Assembly.
“This electioneering period heralds the end of a dispensation and the beginning of another. Ika North East must get it right by choosing the right candidate to be their representative, and it is our responsibility in Ika North East APC to propagate our message of hope, trust, brotherhood and new beginnings.
“In a few weeks we would be coming out with our plans and projections for the Constituency, from then onwards we would approach every nook and cranny of the LGA with our message”.
He concluded with further appreciation to leaders across board for their support and promised not to let the party down, as well as urging support for all APC candidates for the general elections in 2023.
” In conclusion, I thank every leader for their inputs towards bringing us to this point. Members of the Sebastine Okoh Campaign Organization (SOCO) are also appreciated for their consistency and diligence.
“We need to do more, we need to show more resolve to ensure that Ika North Constituency is redeemed from the shackles of inappropriate representation.
“We must rally round our brothers, friends, family members far and wide towards the mission of the moment.
“Ika North East Constituency exists in Delta State alongside other local government areas, as well as being one part of the Ika Federal Constituency, therefore we must work towards APC winning not just Ika North East, but Ika South and other constituencies in Delta State.
“From the Governorship to the National Assembly and Presidential Elections, we must take our campaigns to every part of the state in solidarity with the coming change that we desire.
“Together we will do big things, and I promise to do my best to not let you all down or betray your trust”.