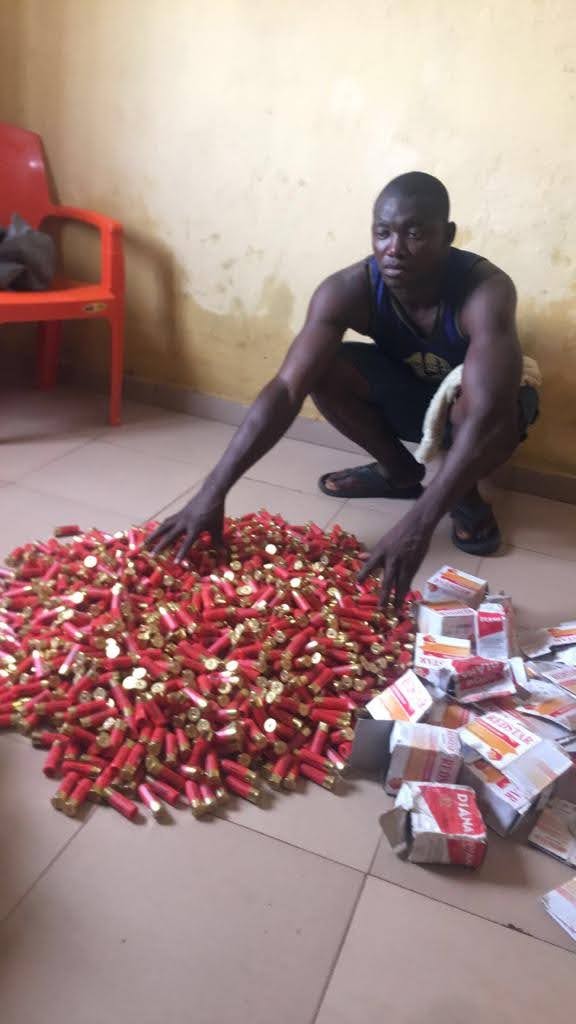 A statement by the Police Public Relations Officer (PPRO) of the Command, DSP Bright Edafe made known suspects netted into its dragnet.

DELTA STATE POLICE COMMAND ARREST SUSPECTED ARMED ROBBERS, CULTISTS, DRUG DEALERS, RECOVERS ONE THOUSAND ONE HUNDRED AND TWENTY  FOUR  (1124) LIVE CARTRIDGES, ONE ENGLISH PISTOL, SIXTEEN {16} WRAPS OF SUBSTANCE SUSPECTED COCAINE AND OTHER ILLICIT DRUGS
1.      On 2/6/2022 at about 1530hrs, Operatives attached to the Command’s Safe Delta Tactical Squad deployed to head-bridge the boundary between Delta State and Anambra State, while on stop and search duty at the head-bridge, intercepted one Innocent Uboh ‘m’  a  native of Ogume in Ndokwa West L.G.A, Delta State, driving a Toyota Hiace bus with reg. no FGG 645 ZV, the driver was the only occupant of the vehicle. He was subjected to search and upon searching the vehicle, one thousand, one hundred and twenty-four (1124) rounds of live cartridges, twenty (20) bottles of codeine, and other illicit drugs were recovered. Suspect claimed that the cartridges belonged to a man named Monday Adibeli ‘m’ 61yrs in Ogume. On the strength of this information, Operatives were deployed to Ogume where the alleged owner if the cartridges was arrested. Investigation is ongoing.
2.      On 01/06/2022, at about 1430hrs, Crack Surveillance Operatives  raided a criminal hideout  at Okwagbe Community in  Isoko North LGA, Delta State. During the raid, three suspects namely; Alex Johnholt ‘m’ age 32yrs, Abe Ujiro ‘f’ age 25yrs, Omoro Joy ‘f’ age 26yrs were arrested, One hundred and five {105} wraps of SK weeds,  six {6} wraps of loud, sixteen {16} wraps of substance suspected to be cocaine,  four {4} wraps of Indian hemp, four {4} litres of monkey tail, sixty {60} packs of razlers,  one Indian hemp grinding device were recovered from them. suspects will be arraigned in court as soon as investigation is concluded.
3.      On 1/6/2022, at about 1130hrs, Police Operatives attached to Bomadi Divisional Patrol team while on routine stop and search duty along Bomadi/Oboro road, intercepted a motorcycle rider carrying three passengers. The team subjected them to a search during which one English Pistol was recovered from one of the passengers named Destiny Ebibo ‘m’  age 22yrs  of Oboro Community but stays in Abraka. One red beret  suspected to be of the  Icelanders confraternity was also recovered from the other suspect named George Terrence ‘m’ age 22yrs  of Okpokunou Community, they have been taken into custody and investigation is ongoing.