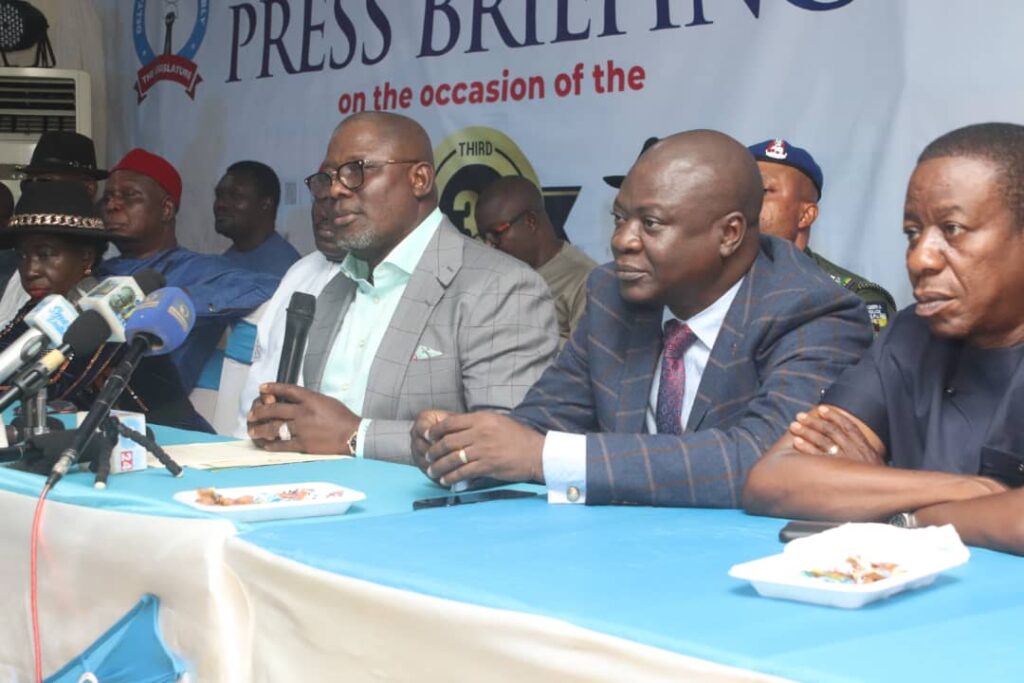 Speaker of the Delta State House of Assembly, Rt. Hon. Sheriff Oborevwori on Friday listed exploits and achievements of the lawmakers, declaring that the Assembly has done well and lived up to the claim of the most vibrant Assembly in the country.

Oborevwori, who emerged flag bearer of the People’s Democratic Party (PDP) after winning the party’s governorship primary spoke at a press briefing held to commemorate the 3rd Anniversary of the Seventh Assembly held in the press centre of the House of Assembly.

Joined by the legislators at the briefing, he noted that the anniversary was a momentous event for the seventh Assembly. He said: “This is the first time a Speaker of the House is addressing the press on the activities of the House to mark its anniversary as Speaker and at the same time a gubernatorial candidate. Together we have made history.”
Pointing out that the press briefing provided opportunity for the assembly to showcase its successes, challenges and prospects, Oborevwori said: “The Seventh Assembly since its inauguration in June 2019 has dutifully continued to perform its constitutional role of law making, representation and oversight of other arms of government. We have demonstrated will in scrutinizing requests from the executive arm of government, ensuring passage of realistic budgets, robust engagement with Ministries, Departments and Agencies of government, undertaking constituencies outreach, oversight of government’s projects and programmes, and passage of people oriented Bills into law for the development of the state.

He said: “We have demonstrated strong will in scrutinizing requests from the Executive arm of Government, ensuring passage of realistic Budgets, robust engagement with Ministries, Departments and Agencies of Government, undertaking constituencies outreach, oversight of government’s projects and programmes, and passage of people oriented Bills into law for the development of the State”, he stated.

According to him, in the course of the Third Session of the Seventh Assembly, lawmakers in the State reaffirmed their commitment in contributing efficiently and effectively, legislative actions and programmes geared towards infrastructural development, empowerment schemes for youth and women, free maternal health, free basic and secondary education, peace and security for the people.

He said that; “As a House, this media briefing provides us an opportunity to showcase our successes, challenges and prospects in the last Session. Gentlemen of the press, despite the challenges of the new normal brought about by the Covid-19, in the Third Session, the Delta State House of Assembly was able to make remarkable progress in carrying out its constitutional legislative duties of lawmaking, representation and oversight functions without let or hindrance”.

The Speaker, who was flanked by Principal officers of the House disclosed that during the period under review, the House received a total of twenty five Bills; fifteen Executive Bills and ten Private Members’ Bills, adding that out of this number, twenty one Bills were passed; fifteen Bills plus one Bill received by the House in the First Session, but passed in the Third Session were assented to by the State Governor, Senator Dr. Ifeanyi Okowa, “six of the Bills are awaiting assent while three are still undergoing consideration by the House. The House also approved 85 motions and resolutions in the period under review”.

He also said that in the same period under review, the House hosted some Civil Society Organisations (CSOs) and promised to partner with them for a robust lawmaking process and other areas that will promote good governance through the apparatus of the Legislature.

“The House knowing and recognizing the importance of the media in the development of our democracy has a cordial working relationship with the Press. In the Third Session, we had interactive session with the State Chairman and leadership of the NUJ. We also received in audience some chapels of the NUJ in the State. We will continue to count on the Press for the coverage of activities of the House. My office is open and you have unhindered access to verify any piece of information before going to Press”, Rt Hon Oborevwori said.

The Seventh Assembly, he said, has always harped on continuous training of Members and Staff for efficient and effective service delivery, revealing that; “In the Third Session, Members attended a rigorous and tasking leadership training at the Moller Institute, Churchill College, University of Cambridge, United Kingdom. The impact of that training has elevated the quality of work output in the House”.

“In this period under review, management staff of the House attended a Retreat to evaluate and strengthen the work ethics of staff to enhance service delivery. Staff and political aides were also sent for various specialised workshops and training respectively”, the Speaker said.

He noted that the Seventh Assembly believes in industrial harmony and therefore has maintained and sustained cordial relationship with the Parliamentary Staff Association of Nigeria (PASAN) and said that; “In the period under review, for the first time in the history of the House, the leadership of the House approved end-of-year party for staff and their families to unwind”.

The House, he pointed out, could not have achieved this feat without the support of Governor Okowa, disclosing that Delta State was among the first states to operate financial autonomy in the three arms of government and that respect of the Governor for the doctrine of separation of power among the three arms of government has resulted in economic growth, job creation, infrastructural development, peace and security in the State.

“I cannot forget the immense contributions and cooperation of management and staff of the Assembly for the success recorded so far. In the same vein, let me sound our appreciation to Deltans, residents and constituents for their love, prayers and support for the Legislature. We will not take your mandate and trust for granted”, he stated.

He also said that; “As we begin a new Session today, we will remain committed to the service of our people with all sense of responsibility and accountability. We will continue to apply ourselves to the job we are elected to do, so that together with the Executive, we shall FINISH STRONG”.