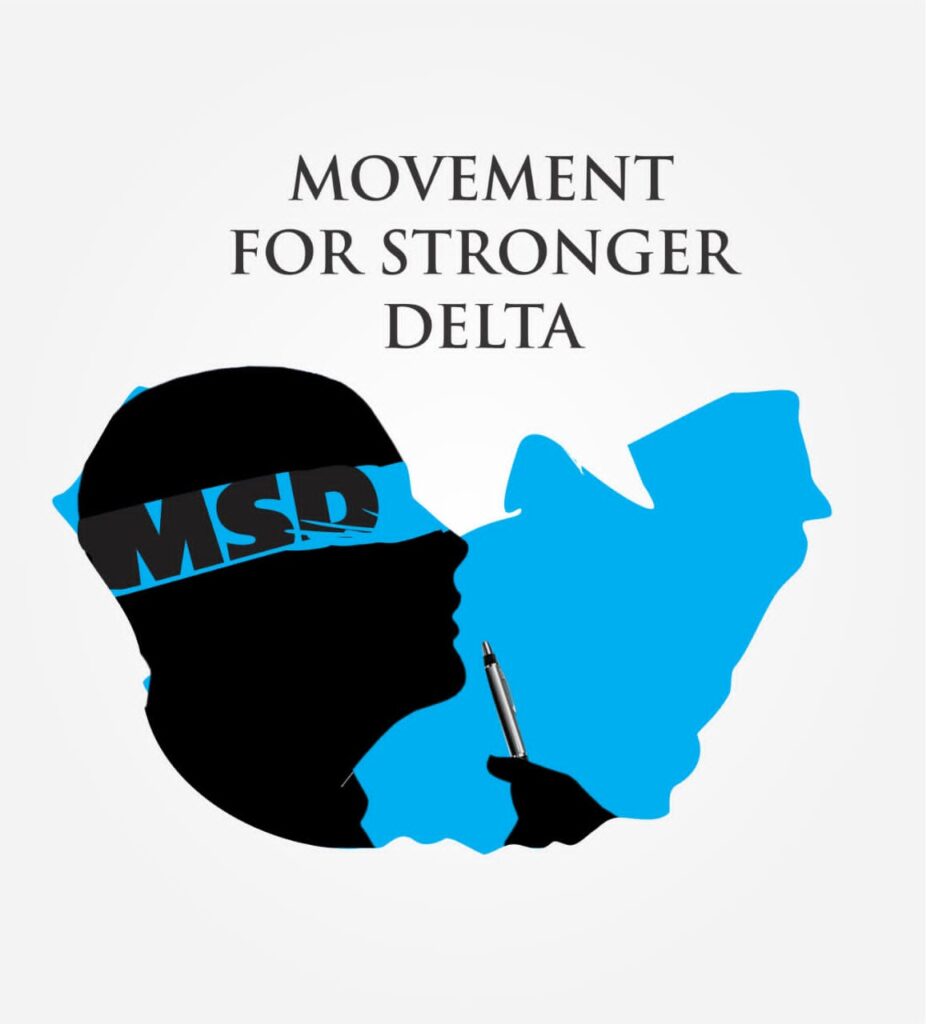 The Movement for Stronger Delta (MSD) once made a shout of derision when it called the attention of Deltans to the sinister and mischievous manifestation of one who is widely known for his undesirable act of blackmail; one who indulges in plotting stratagem, and a way of life by which he swindles unwary victims, making filthy lucre out of them.

He is at it again, this time against his sworn foe, Senator, Dr. Ifeanyi Okowa, the sound and sober Governor of Delta State, who has refused to fall for the blackmailer’s satanic antic of coercion. The swindler by his nature and notoriety wants to be noticed. The Governor has shunned him, refusing to give him attention. But the blackmailer is unrelenting. As usual, he is engaging in all manner of evil gear, including using the clever ruse of writing a fictional narrative to deceive gullible members of the public into believing his invented lies, when the real motive is to deliberately produce disinformation aimed disingenuously to attack the personage of his perceived victim.

But Jesus Christ the Lord and Saviour of the world was so angry with persons with this type of devilish character that in exasperation He described them in Matthew 23:33 calling them thus: “ ye serpents, ye generation of vipers, how can ye escape the damnation of hell?” And Barnes’ notes on the Bible in its exposition on “ye serpents” explains, saying: “This name is given to them (the scribes and Pharisees, enemies of the gospel of Christ) on account of their pretending to be pious, and very much devoted to God, but being secretly evil, at the heart, with all their pretensions, they were filled with evil designs, as the serpent was in Genesis 3:1-5.”

There is no better way besides the above reference to describe the machinations of the scribbler of the gibberish on social media with the headline: “The many people Governor Ifeanyi A. Okowa has betrayed.”
It doesn’t require going far to find out what the author is after by his undesirable babble; it is as he has done unsuccessfully times without number to hit the heads of two political kingpins – Chief James Onanefe Ibori and Senator, Dr. Ifeanyi Arthur Okowa, the sitting Governor of Delta State against each other, denigrate Okowa and create a false impression of disaffection between them.

The nitwit wrote:  “Chief James Ibori – He was a nobody until James Ibori made him a commissioner, senator, and a Governor. Forget the old claim of him being LG Chairman before 1999. After his old Chairmanship, he was nothing till Ibori came. He betrayed Ibori by backstabbing him and not consulting him on who became the PDP candidate.” He similarly mentioned others who, in his twisted imagination were those that Okowa betrayed. For the pervert, Okowa betrayed all these men when he promised to give them elective appointments and failed them.

MSD is shocked to observe that it is this hack writer, with abnormal thought patterns that some people depend on for so-called information. Unfortunately, those like him are easily beguiled when they swallow all the concocted lies and misrepresentation hook, line, and sinker, without taking time off to at least examine the logic of the so-called information fed to them.

It becomes pertinent to point out that Governor Okowa has never claimed to be God. The Almighty is the one who determines the fate of those seeking elective positions. The Governor has always made it clear that it is God who determines who succeeds in an election. It is therefore puerile and misleading to put the blame on those who could not make it during party primaries on the person of the Governor. What Governor Okowa has superbly shown is that he is a true democrat by allowing everyone seeking to fly the PDP flag in Delta State in the 2023 elections to go and work on the field, sell themselves and programmes and woo potential delegates and thereafter prove their popularity at the party primaries.

Besides, the Governor resisted attempts to get him to single-handedly handpick persons as sole candidates for any position. He told everybody to go to the field and work, and that he would provide a level playing field for every contestant. And this he did. The proof that the Governor did not interfere with the conduct of the primary elections is that those who participated were convinced of the peaceful nature of the primary contests, transparency, and the free and fair nature of the conduct of the primary. It was a case of equal opportunity for all the aspirants and the delegates gave expression to their choice of candidates to support with their votes.

So, it, therefore, beats the imagination why someone would want to twist the events and create the false impression that the Governor had a hand in the victory of those who succeeded in the primaries. MSD declares that Okowa refuses to be associated with what only God can do. Those who were successful have since given the glory to whom it is due, God. And it confirms the word of God in John 3:27 – and the Amplified Bible puts it clearly this way: “…. A man can receive nothing, he can claim nothing at all unless it has been granted to him from heaven; there is no other source than the sovereign will of God.”

It is against this background that MSD calls on leaders, members, faithful, and supporters of the Peoples Democratic Party (PDP) in Delta State as usual to discountenance the propaganda of this breed of viper from whose pen flow unbridled immorality. PDP faithful must not fall for the antics of this debauched hack writer. MSD calls on Delta PDP to be sensitive to the fact that the author of this fake story is working for his sponsors, who clearly are opponents of the party. And the strategy is to create disaffection between the party leaders and their supporters. It is to make them busy with infighting and lose cohesion that is critically needed now to face the opposition at the 2023 general elections.

MSD makes bold to declare that Okowa and Ibori are united with one mind for PDP’s victory in the elections. There’s no fight between them. Of course, in a democracy and for the purposes of an election, it is not out of place for persons to have interests in candidates they support, but all that has closed and subsumed with the emergence of PDP flag bearers at the transparent and free and fair primaries for the nomination of party candidates.

Therefore, leaders must come together and assure their supporters that there’s no division, and that now that candidates to fly the PDP flags have emerged, all hands must be on deck to consolidate, get united again, and stand firm for the party’s victory at the elections. This is the way to consolidate the hold on Delta State and to reaffirm the truism that PDP is Delta and that Delta is PDP.

PDP members and leaders must refuse to be hoodwinked into losing focus on the duty-call on them to work for the party’s success in the elections. Refuse and reject this breed of a viper and his pen of immorality.

This, as you already know is the Simple agenda.